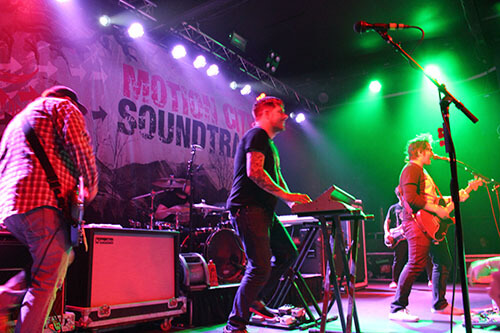 I make it a point to try to only review things that are my thing, so I never have to add “…if that’s your kind of thing” to soften my message.

Motion City Soundtrack and William Beckett at The Waiting Room was exactly my kind of thing.

To start out, William Beckett, formerly of The Academy Is… Where do I start with Willliam Beckett?

The last time I saw William, it was 2011 (little did I know it would be only a month before TAI broke up) and he was playing a packed show in Little Rock with his full band. It was crowded but I felt like I was the only one in the crowd who knew the words. This time, it was just WBeck and his guitar but everyone in the crowded room knew the words.

William has been making his own way since TAI broke up, including releasing three EPs in a year. He’s also been on tour with Motion City Soundtrack; his visit to The Waiting Room was his last stop on their tour and as he put it, “I don’t know, anything can happen.” 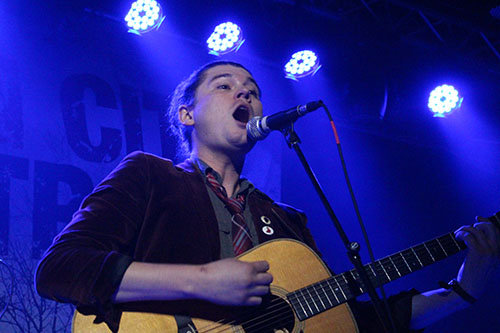 He started out the show with a heartfelt acoustic version of TAI’s “The Phrase That Pays” and it really was hard to not feel like you were knocked back into the ’00s. It was also hard to not get goosebumps as the entire room crooned along with Beckett: “Hold your head high, heavy heart.” It’s been a long time since I’ve screamed the words to a song so loudly that my throat gave out. Thursday night I walked away hoarse for the first time maybe since I last saw TAI.

Beckett’s set was a couple of his solo pieces bookended by some of the biggest hits from TIA’s Almost Here as well as “About a Girl” from Fast Times at Barrington High. The energy was electric, every person singing along sharing my delight at hearing songs we thought might never get sung live by this voice again. (We were later rewarded with the information that TAI is playing one final farewell show at Chicago’s Riotfest this year, if anyone would like to trek that far.)

Beckett himself is tall and very skinny and has a small faltering stammer when he talks both between songs or off stage. He sounded sincere if not a little nervous to be talking when he got somber before his song “Just You Wait,” a song for his younger sister. Beckett told the story of the two of them growing up children of divorce and the shuffle between schools. The song was written as a gift to his sister, encouraging her to hold onto hope as Beckett says she took the moving–and bullying and lack of friends that unfortunately accompanied it–harder than he did. His hesitancy disappeared as he made a serious statement about mental illness, however: “There are some institutions that believe depression, anxiety, self-harm, even suicide are just things of adolescence, that they are done for attention. While that may be true sometimes, for the most part that is utter bullshit. These things are real and they are serious. So this song is for anyone who has ever struggled with that or has a family member or loved one who has.” It’s not a completely unheard of statement–most musicians nowadays write a song or seven that is “for anyone out there who has ever struggled.” However, it’s hard not to see the sincerity in William’s voice as he tells his sister–and the audience at large–“Soon enough you’re gonna graduate, / start again when you turn the page. / It gets better girl, just you wait.”

Motion City Soundtrack came on around nine to an absolute roar of approval from the crowd. They played a staggering 20 song set, plus an encore, and they killed it. If “it” were a thing, it is dead and the crowd gleefully jumped all over it while cheering at the top of their lungs. If you have any interest at all in Motion City Soundtrack and didn’t catch them at their show Thursday night…well, I would suggest going to see them another time as soon as possible. It really cannot be voiced just how exuberantly excited the band seemed to be playing together. That kind of joy is infectious. 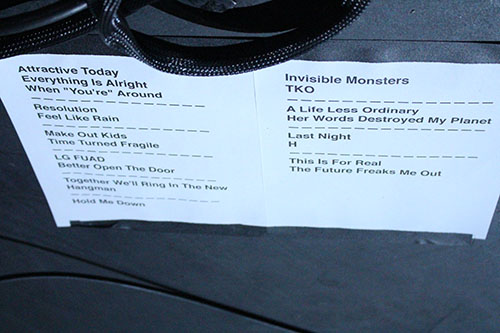 If I were to find a complaint for the MCS show, it would be that singer Justin Pierre’s vocals were not loud enough. I don’t know if I can blame The Waiting Room for that, however, so much as the insanely loud guitar, enthusiastic drumming and the sheer overwhelming volume of the crowd. It did make it a bit difficult to keep up unless you knew without a shadow of a doubt the words and music by heart. Luckily, however, most of the crowd did know the music that intimately and even if you didn’t, it was still an infectious energy to dance to.

About 12 songs in, MCS faked an ending to make sure the crowd was still fired up–they were–and kept the energy going for eight more songs. They ended with “The Future Freaks Me Out,” their biggest hit that first got them on people’s radar. Their encore was “My Favorite Accident,” ending on a fond but bittersweet note as most good nostalgia-laced concerts tend to.

To close, I would like to take a second to tip my metaphorical hat to the biggest fans of each band that played, because good fans should be rewarded for their quirks and enthusiasm.

Biggest fan of William Beckett goes to that big, fluffy, bearded drunk guy behind me. You may not have known all the words in the right order but you certainly knew all the songs. Your absolute joy in seeing William was overshadowed only by your size and your tendency to shout song requests every few minutes. I’m glad you got to see and meet him and I’m glad it was as good for you as you hoped it would be.

Biggest fan of Motion City Soundtrack goes to the keyboardist for Motion City Soundtrack, Jesse Johnson. A quick google search of your name tells me you aren’t in fact a fan who wandered up there and knew all the words but are in fact a member of the band. I also see that your enthusiasm was not just limited to your Omaha show, but that keyboard handstands are a regular part of your performance repetoire. When you weren’t hitting a couple keys on the keyboard or smacking a tambourine more enthusiastically than I’ve ever seen anyone, you were air drumming harder than even my most hardcore air drumming sessions. Bless you for having what is obviously your dream job and may you continue to dance and jam for many many more years.