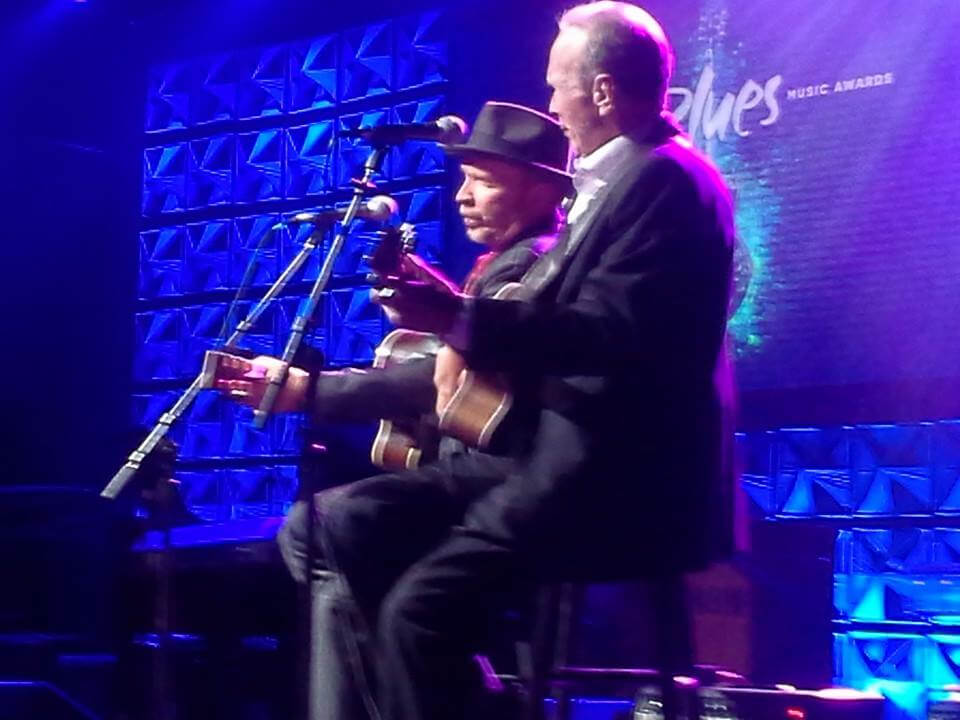 Last week the 36th Annual Blues Music Awards were handed out May 7 in Memphis in a gala event at the Cook Convention Center. In some ways, the sold-out dinner and awards show was your usual dinner and awards show. For a blues fan, the awards were an overload of industry luminaries and newcomers, with a wealth of performances. Artists on hand included Charlie Musselwhite, Keb’ Mo’, Bobby Rush, John Hammond and Elvin Bishop. Bishop took home both Band of the Year, Album of the Year and Song of the Year awards, sporting overalls and a plaid shirt on a night when most folks were shined up in their finest. Bobby Rush received the Soul Blues Male Artist of the Year and B.B. King Entertainer of the Year honors, and his comments acknowledging King’s ailing health brought one of the more touching moments of the night. Another moving moment came when West Coast drummer Jimi Bott finally won the Instrumentalist-Drums category after being the “Susan Lucci of the Blues Music Awards,” holding the most nominations on record without ever winning. Seeing the obviously emotion-filled Bott accept the award was a memorable moment from the evening. Bott has toured as part of The Fabulous Thunderbirds, The Mannish Boys, Rod Piazza and Mark Hummel and has nearly 70 recordings to his credit including work with William Clarke, Billy Boy Arnold and James Harman.

Artist performances during the evening included Hoodoo favorites Dave and Phil Alvin showcasing two tunes from Common Ground: Dave Alvin and Phil Alvin Play and Sing the Songs of Big Bill Broonzy, nominated in the Best Traditional Blues category. The award went to For Pops (A Tribute to Muddy Waters) by Mud Morganfield and Kim Wilson.

It was like that all night long with big names and high quality artist nominations in all the categories. The triple-thread revue featuring Mark Hummel, Anson Funderburgh and Charlie Baty opened the official awards show in the ballroom. (That stellar band hit Lincoln’s Zoo Bar on the way to Memphis and will be back for Zoo Fest in July.) The old awards adage always goes that it’s an honor just to be nominated. But in the case of the Blues Music Awards the list of nominated artists truly marks many of the finest acts working today. Checking out the nominated artists is a great place to start if you are not familiar with all the acts and are interested in exploring new music. The nominations are decided by a board from the Blues Foundation, and the winners are decided by a public vote from dues-paying members of the Foundation.

The evening offered plenty of opportunities for old friends to connect and new acquaintances to be made. It was tough to split my focus between following the award announcements, catching the high-profile performances and keeping up with the social side of the evening. It was fun to share the evening with old friend Sax Gordon Beadle, nominated in the sax category even though he mostly stays busy working in Europe these days. Beadle has put out two fine discs spotlighting his hot R&B sax work in the last year (sometimes being a friend does not deter from being an enthusiastic fan) and released a house-rockin’ solo disc the year prior. Check his work out at saxgordon.com. He also posts great photos from his touring travels at facebook.com/saxgordonmusic. Beadle brought his friends the celebrated Brazilian guitarist Igor Prado and Austin-based vocalist Jai Malano as guests. Others seated at our table included Kenny Neal and his wife, Jimmy Reed’s daughter and Al Basile. By the end of the night I found myself making the acquaintance of one of WIllie Dixon’s daughters also.

Pretty early in the evening I resigned myself to the fact that I was just going to miss some things, and tried to just roll with the evening and enjoy it all. With the sold-out crowd, it was impossible to even greet everyone that you knew. There were a few other Omaha folks that I saw in attendance and for a true blues fan, I think attending the awards would be a real treat. The star-power on hand was significant, the sound quality of the performances was good and the performers on the main stage got some time to stretch. It would have been nice if the acoustic sets had been given another song, most artists got a two-song mini-set. I’d never seen nominated artist Doug MacLeod perform live and his story-song performance about people’s “love buckets” was also a moment that was both heartfelt and scene-stealing. Another artist I hadn’t seen before live and really enjoyed was Sugaray Rayford, who is a great, high-energy entertainer and had a nomination in the Best Traditional Blues Male Artist category, where the award went to Chicago’s Lurrie Bell.

You can find the listing of all the nominees and winners at blues.org.

The weekend also marked the long-anticipated opening of the Blues Foundation’s physical space for the Blues Hall of Fame. Now the Foundation has a place to present information about the inductees and to develop an educational archive for information and research. The Hall at 421 South Main, across the street from the acclaimed Civil Rights Museum, has artifacts selected from the 130 individuals who have been inducted since 1980. This year’s inductees were veteran blues entertainer Tommy Brown who was present to accept his award, guitarist Eric Clapton, who sent a thoughtful written statement thanking the Foundation for the honor and roots pioneer Little Richard. This year’s inductee announcements came early in the awards evening and there was also a great moment that nightwhen inductees or family representatives gathered together for a group photo onstage.

In addition to the inductee memorabilia, the main gallery of the Blues Hall of Fame currently hosts an exhibit of the extraordinary music photography of Dick Waterman, who was on hand for the opening day.

Beyond the main events of the Awards and the Hall of Fame opening, there were showcases and jams on Beale Street. Brandon Santini hosted an afternoon of music on Friday, May 8, to benefit the Hart Fund, the Blues Foundation’s Handy Artists Relief Trust that provides financial assistance to blues musicians and their families for medical expenses to burial fund assistance. The music was great, with many blues stars dropping in to perform. The afternoon event generated a remarkable $10,000 in donations in a half-dozen hours. I’ll try to give you some more highlights from the showcases and jams soon.

If you are a serious blues fan and you are not a member, you should take a look at what the organization is doing and consider supporting the ongoing mission of keeping the blues alive by becoming a member of the Blues Foundation. The organization is making an impact with the ever-growing International Blues Challenge and the annual Blues Music Awards along with working with young musicians in the Generation Blues program and administering the HART Fund.

WRITER’S NOTE: due to a last minute illness, The 24th Street Wailers had to cancel but KRIS LAGER BAND is filling in at The 21st Saloon 6-9 p.m. for an all-too-rare, two-set local club show! The marvelous rockabilly of The 24th Street Wailers is up at The 21st Saloon Thursday, May 14, 6-9 p.m. New member Elliot Sowell is apparently still recovering from a medical emergency he suffered last week and is not with the band on this run. Front woman Lindsay Beaver is a powerhouse who delivers original material with passionate, fiery singing while also holding down the drum work. The band features fine R&B-style sax from Jon Wong. Their last disc, Wicked, was a Juno nominee (the Canadian equivalent of the Grammys) and was produced by Nick Curran’s bassist Billy Horton. If you like rockabilly with that from-the-heart vintage vibe, this is seriously a bad-ass band, come on out and get hip! See the24thstreetwailers.com.

The Blues Society of Omaha (BSO) is launching a new website and the calendar function is now active. So now you can check out the calendar at omahablues.com for updates on live blues and roots music in the Omaha-Lincoln area. (Full disclosure: I am a member of and advisor to the BSO.)

Kris Lager Band’s (KLB) annual HullabaCruise is sold out but for Saturday night, May 16. KLB friends Andy Frasco and the U.N. bring their high-energy party blues to the covered party barge on the landing at the River City Star at 10 p.m. Tickets for the Friday, May 15, cruise are available while they last at eventbrite.com.

Sower Records’ Sowerfest is happening at Duffy’s Tavern in Lincoln Saturday, May 16, 9 p.m with two stages and a mere $8 cover for 24 roots artists performing from 1 p.m.-1 a.m. See sowerrecords.com for the line-up and all the details.

Blues harmonica virtuoso Jason Ricci is back on the touring circuit and gigs at The 21st Saloon next Thursday, May 21, 6-9 p.m. Check out his music at mooncat.org.