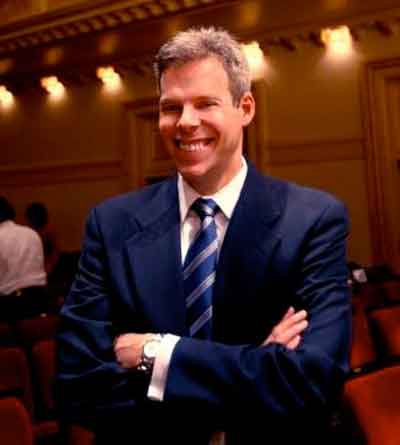 James M. Johnson was a musician before settling into arts administration, and he might be dusting off his double bass in the coming months. “Unfortunately, having spent the last 25 years in a series of tiny New York City apartments, I never found room for a double bass,” Johnson says, laughing. “Maybe now that I’ll have a little more room I can pick it up again.” On May 4, the Omaha Symphony announced Johnson would be the president and chief executive officer of the 90-year-old arts organization. Johnson starts work June 1. His wife and two daughters, ages 6 and 11, will join him a month later. “My wife and I already bought a house. We’re really looking forward to joining the community,” Johnson says, adding he cannot wait to learn “what makes the community tick, what inspires people” so he can discover what Omaha wants and what the Symphony should deliver. Johnson grew up in the Seattle, Wash. area and attended Pacific Lutheran University in Tacoma. “While at university I decided I had more talents off the stage than on,” he says. He earned his masters in business and in arts organization and has been working in nonprofit arts for the past 25 years. Johnson spent the past 10 years as CEO of the New York Pops. “It’s a terrific organization, wonderful orchestra and our home is Carnegie Hall, so it’s been a real privilege to be in that position,” he says. “But the Omaha Symphony is actually a better opportunity for me. It’s a larger institution, presents more concerts each year and the Holland Center is a wonderful hall. I’m happy to take the challenge of leading the organization. I’ve had a chance to hear the orchestra, they’re wonderful, the musicians are first-rate.” Johnson has Midwestern roots, too. The old family farm, begun by his Norwegian immigrant ancestors, remains north of Ames, Iowa, and many of his cousins still work the land. “I never hesitated on moving to the Midwest. It felt like a natural fit,” says Johnson. “Omaha has a lot to offer culturally and a lot of great educational opportunities. It’s an ideal place to be.” Johnson says his job will entail administrative duties with regard to the orchestra, including fundraising, marketing, planning and production of concerts. “Without setting any specific goals yet,” Johnson says, noting he’ll need to immerse himself in order to identify exact objectives, “I think the critical factor is to gain the orchestra a greater presence in the community. The community has to see the orchestra as a valuable asset for its wonderful music, educational opportunities and the other intangible elements that an orchestra brings to the community. I imagine that will involve doing more programs outside the hall and doing more promotion of existing strengths.” Two such strengths he sees include Omaha Symphony’s educational programs and pops series. “I think the orchestra’s educational programs are really something to be celebrated,” he says. “The exposure and impact on students is extraordinary.” One of Johnson’s main passions is education, inspired by his own experiences as a child. “I started playing when I was 10 years old, but it wasn’t until I walked into a concert hall and heard a professional orchestra warming up — just making notes — that I realized what music could be,” he says. “I’ll never forget that sound, it stirred something inside of me that wanted to make music the most important part of my life. Kids need to be exposed to that. Just the ability to hear that music can change lives. It certainly changed mine.” As he joins the community, Johnson also hopes to strengthen its artistic alliances. “I believe in the power of collaborations,” he says. “When you can find a good artistic partner it makes all kinds of sense. You reach a larger audience with a greater impact.” He also sees pops concerts as a way to make the Symphony experience more inclusive. “A whole series devoted to the rock genre shows a commitment to an audience that wouldn’t necessarily attend a classical music concert, but it’s an audience we want to serve,” he says, referring to the Symphony Rocks series. “We want to make sure that we are reaching as broad of an audience as possible. Pops programming can be just as interesting and compelling from an artistic point of view as classical offerings, provided you give the same care and attention.” Johnson says he’ll likely delve into bolstering pops programming right away, noting ever-eclectic audiences. “How people listen to music has changed radically in the last 10 years. No one says, ‘I only listen to X, Y or Z.’ We’re all listening to everything,” says Johnson. “I think that’s something orchestras can learn from, and respect that even the crowd that comes for your Mozart concert could possibly be listening to Lady Gaga in the car on the way home.”