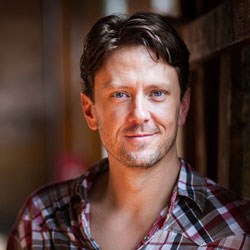 “I hear America singing…each singing what belongs to him or her and to none else” wrote Walt Whitman. This is from a famed poem which is set, appropriately, to American music by Pulitzer Prize- winning Steven Stucky. You can hear it performed by baritone Christopher Burchett and the Omaha Symphony led by Thomas Wilkins at the Joslyn Art Museum January 10th. Whitman’s title is also this concert’s, presenting Stucky’s four- part “American Muse.” Other parts set poetry by John Berryman, e e cummings and A.R. Ammons with cummings evoking a legend from this territory: Buffalo Bill. “I looked for texts that somehow dealt with Americaness,” Stucky said,” even the physical realties of the national landscape. ”

Music written in this country from 1937 to 1999 is featured. Virgil Thomson celebrates our legacy by calling forth familiar tunes and melodies such as “Dixie” “Hot Time in the Old Town Tonight” and “ We Won’t Go Home Until Morning,” in a suite from his score for the documentary film The River, commissioned by the U.S. Department of Agriculture and inspired by the mighty Mississippi. Both men, by the way, came from the Midwest, Thomson from Kansas City, Missouri and Stucky from Hutchinson, Kansas.

Matched in spirit and rooted in tradition is the fourth piece, Eric Ewazen’s “Chamber Symphony.”The New York Philharmonic, the Chicago Symphony, the Cleveland Orchestra have all played his compositions. This one has “strong rhythm,” writes program annotator Paul Schiavo, calling the Symphony “colorful and melodious.”

Mr. Burchett has quite a career, having been seen and heard opera-wise in New York, Boston, Virginia, Santa Fe and more. Concert-connected, he’s sung works by, among others, Bach, Britten, Beethoven and Vaughan Williams. The baritone is considered a champion of new scores. Case in point, and appropriate to this engagement, he’s heard on iTunes with Opera America Songbook. Underscored by appearing before in Omaha, with the Orchestra, he performed songs by Broadway legend Frank Loesser. And, in 2008, Burchett sang in Opera Omaha’s production of Blizzard Voices by Paul Moravec.

Undoubtedly everything in this concert belongs to the people who wrote it. It belongs to us too. Americans.