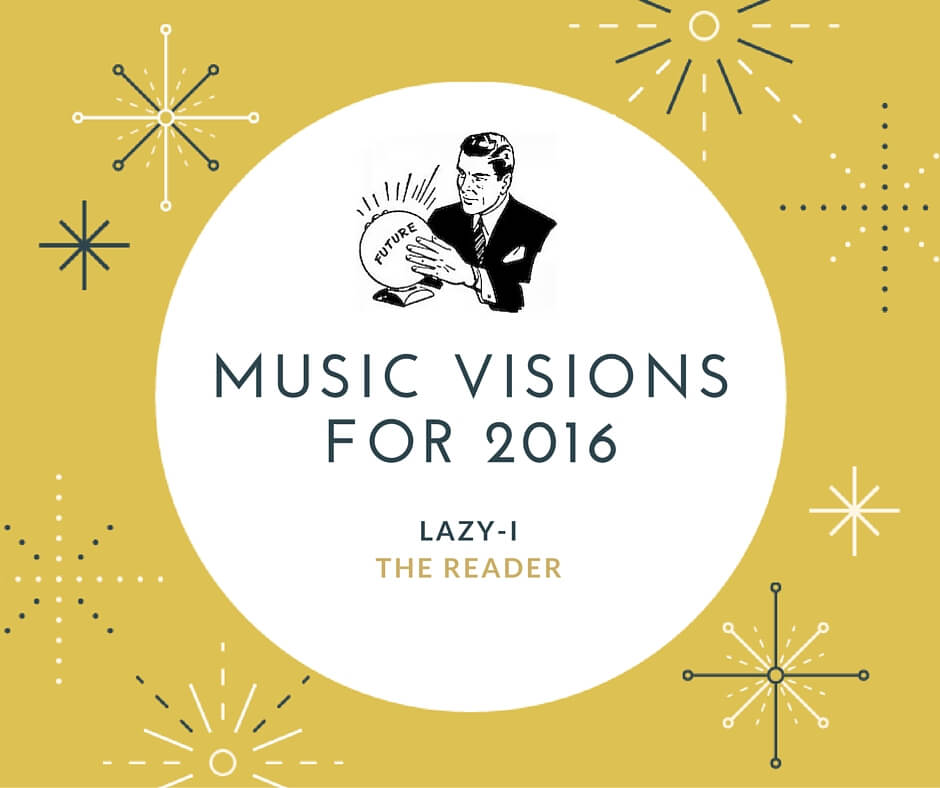 So now you know what happened in 2015. Here’s what’s going to happen in 2016. But first, let’s score how well I did with last year’s predictions. My crystal ball must have been broken because I didn’t do so good.

2015 Prediction: An all-out Spotify rebellion will break out next year, and it won’t be coming from independent labels who are getting gutted by the service, but rather (ironically) from big name stars who make the most money off Spotify. And you’ll have Taylor Swift to thank.

Reality: Only a few stars joined Taylor and stayed off Spotify — Prince, Thom Yorke and Jason Aldean. The reason no one’s jumping off the streaming train — through mid-year 2015, music streaming has increased year-over-year by 92.3 percent, according to Nielsen Music. With the industry in shambles, who doesn’t want to ride that wave?

2015 Prediction: The vinyl craze will slow after a year that saw a 49 percent increase in U.S. vinyl sales vs. 2013 numbers. Younger music fans refuse to embrace a medium they see as an interesting but inconvenient gimmick that costs twice as much (or more) than what they pay to download the same album (if they pay at all).

Reality: As of July, vinyl sales climbed another 38 percent year-over-year in the U.S., with vinyl now comprising nearly 9 percent of all physical sales (up from 4 percent), according to Nielsen.

2015 Prediction: More record labels will be forced to follow record label Fat Possums’ lead and open their own vinyl pressing plants due to the shortage of vinyl manufacturing options.

Reality: Didn’t happen. In fact, according to Nielsen CD sales were down 10 percent by mid-year 2015 versus the previous year.

Reality: While artists such as Bjork and Squarepusher have produced 360-degree “virtual reality” videos, I’ve yet to see a band create something specifically for Oculus Rift or even Google Cardboard…yet.

2015 Prediction: A reunited ’90s band will release a new recording that will break into the mainstream in a big way. Will it be Sonic Youth, Buffalo Tom, Jane’s Addiction, Galaxy 500, The Grifters, R.E.M. or Commander Venus?

Reality: None of the above. Instead, ’90s alt rock is being regurgitated by today’s crop of indie bands.

2015 Prediction: Bands we’ll be talking about this time next year: Modest Mouse, Hop Along, U2, Desaparecidos, Low, Cursive, Prince, Savages, Lloyd Cole, The Mynabirds, The Replacements, The xx, The Rolling Stones, Tom Waits, For Against, PJ Harvey, Icky Blossoms.

Reality: Hop Along is a critic’s darling, U2 is going back on tour, Desaparecidos cancelled their tour, Low just played Reverb, and Prince released a new album in December.

Reality: Other than FKA Twigs, just about everyone else listed is MIA.

2015 Prediction: The Rolling Stones will be down one Stone.

Reality: Not only are they alive and kicking, but the Stones did a brief tour last summer, and Keith just released a new solo album.

Reality: Well, Sweatshop has been dormant since it changed ownership.

Reality: They didn’t get “that band,” but they did get a sold out concert.

2015 Predication: We’ll experience the first wave of rock ‘n’ roll “retirements” as a number of long-time well-paid singers/songwriters/musicians/bands will announce they’re getting out of the music business because they can no longer make a living at it, thanks to declining album sales and streaming services.

Reality: Not only did no one retire, but Phil Collins said he’s coming back. Does anyone ever really leave the music business?

2015 Prediction: Look for a Kickstarter campaign from a former Billboard chart-topping act (and I’m not talking about Creed).

Reality: Other than De La Soul and TLC, successful pop acts have been avoiding Kickstarter.

Reality: Either the darkness has lifted or I’ve been ignoring the gloom.

2015 Prediction: With the continued popularity of music contest shows like The Voice and American Idol, it was only a matter of time until a network decided to revive American Bandstand.

Reality: Nope. In fact, this will be the final season for American Idol (or so they say).

2015 Prediction: Thanks to its airing on Palladia, someone will create an American version of Later… with Jools Holland.

Reality: We’re still waiting for something / someone like Jools in the U.S.

2015 Prediction: Look for the launch of yet another new FM radio station in the Omaha market that plays CMJ-style indie.

2015 Prediction: As the industry continues to crumble, more historically huge bands will sign deals with mid-level indie labels. Along those same lines, you’ll see more formerly “large” bands and performers self-releasing material as they turn their back on labels altogether.

2015 Prediction: No local or Saddle Creek artist will make it to the SNL stage next year (duh), but one (other than a Conor band) will make it on national TV.

Reality: The only local to make it to the airwaves in 2015 was Desaparecidos.

If I really stretched, I was 5 for 20. Maybe I was trying too hard? This year I’m limiting predictions to just 10. Here we go:

2016 Prediction: In the old days, if you wanted your music to get heard by the biggest audience you sought out radio stations in hopes they’d add your single to their play lists. With music streaming replacing radio as the new music promotional model, the new target is getting songs added to streaming playlists that have the most followers. For example, if you happened to get your song added to Spotify’s “Today’s Top Hits” list, your music would be heard in more than 6 million pairs of ear buds. Spotify’s “New Music Friday” playlists boasts 855,000 followers, according to Billboard. Just as important is getting the attention of DJs, curators and social media “influencers” with large followings. Labels are now hiring reps that do just that.

2016 Prediction: Streaming live performances will become a thing. Apps like Periscope give anyone with a smartphone an opportunity to share a live performance, but more than that, clubs, venues and music halls will begin to upload their soundboard feeds directly to streaming services, sharing concerts as they happen, making it possible to catch sets by virtually any band on tour.

2016 Prediction: This is the year that vinyl crosses the line from interesting novelty to serious revenue stream, as it becomes second nature for labels and musicians to consistently produce vinyl versions for their latest albums. As a result we’ll see the beginning of a second record-store renaissance. More shops will open. In-store performance tours will become as common as book-signing tours. Record Store Day will expand beyond two days a year. Vinyl is here to stay.

2016 Prediction: Apple Music wasn’t the game changer everyone thought it would be, but it still managed to rack up more than 54 million users in 2015, according to Nielsen and was ranked as the No. 9 smartphone app. Watch as more services (including Facebook) get into the streaming music business, forcing Spotify and Apple to to figure out ways to gain bigger market share, ultimately cutting the price of premium streaming services in half (or lower). Free premium streaming may be just around the corner.

2016 Prediction: It’s not unusual that Tom Jones will take his final bow this year.

2016 Prediction: As costs continue to rise and income continues to shrink for record labels, watch as small and mid-sized indie labels begin to consolidate in an effort to share resources and broaden their reach. In this industry model, who would be a perfect suitor for Saddle Creek?

2016 Prediction: A long-time music reporter and Nebraska music scene fixture will either retire or get a new assignment.

2016 Prediction: When The Waiting Room and The Slowdown opened in 2007, those venues focused on booking indie shows. As interest in indie music dropped off in recent years, they’ve changed their course, only occasionally booking mid-sized to large indie rock show. That shift will continue in 2016 as more small and mid-sized indie shows will detour to small venues like Milk Run, Lookout Lounge and O’Leaver’s, who will become the de facto outlets for all things indie. With indie music headed back underground, is the rise in house shows and hall shows far behind?

2016 Prediction: The next network appearance by a Nebraska performer will again involve Conor Oberst, as we welcome the return of Bright Eyes. Will Conor finally make it on SNL? Wait and see…