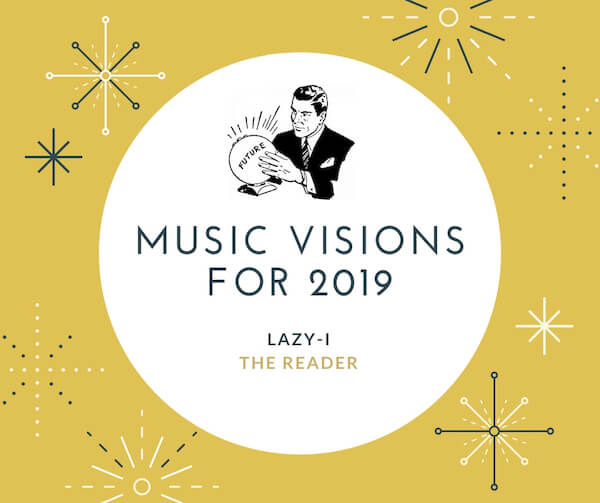 It is time once again to gaze into the crystal Fender Strat and peer into another dimension which will reveal to my eyes alone the happenings and occurrences that shall take place over the next calendar year in the world of popular music. But before we get to that, let’s take a look at how I did with last year’s visions for 2018.

2018 Prediction: With Milk Run gone another DIY venue will emerge to try to fill the void in booking up-and-coming touring indie artists.

Reality: While there are still house shows, no one has really stepped up to fill Milk Run’s shoes.

2018 Prediction: With new California offices, expect as many as four new bands added to the Saddle Creek Records’ roster in 2018, including at least one veteran indie band looking for a new home.

Reality: The Creek added Black Belt Eagle Scout, Young Jesus, Tomberlin and Big Thief’s Adrianne Lenker. As for that veteran band, The Faint is back and will release its first new album in five years.

2018 Prediction: Watch as some rather big names leave NYC and LA for the cheap digs and central location only Omaha can provide.

2018 Prediction: Those who freaked out when vinyl returned will be doubly shocked when cassette tapes begin to make a comeback this year.

Reality: Cassette sales for the first half of 2018 were up 90 percent year-over-year in the UK and we now have an annual Cassette Store Day where you can pick up cassette copies of Nevermind, Back in Black and the Bohemian Rhapsody Soundtrack, among others.

2018 Predictions: Speaking of vinyl, as albums sales begin to flatten this year, watch as prices for new vinyl finally begin to drop. Can the $9.99 album be far behind?

2018 Prediction: Fed up with facing a crowd of people holding up smart phones during concerts, artists will implement new technology that will block smart phone cameras from operating inside venues.

Reality: While this tech exists (Apple patented it years ago) artists are still using Yondr devices to lock up your cell phone during shows.

2018 Prediction: With Hi-Fi House going public last summer and Hear Nebraska merging with Lincoln’s The Bay, look for yet another music-related organization to emerge, this time as a non-profit performance venue.

Reality: The Bemis is establishing a new sound art and experimental music residency program that will include a recording studio and performance space, but the music will be anything but pop.

2018 Prediction: More and more bands will change their names after their first or second release. Same band, different name, all to keep their music in front of the ever-fickle music public always looking for the next big thing.

2018 Prediction: With the opening of the new Capitol District we will see even more live original music somewhere downtown other than at No-Do.

2018 Prediction: As the Maha Music Festival turns 10 this year, expect a mega-spectacular headliner and the festival’s expansion to a two-day event.

Reality: Maha indeed expanded to two days in 2018, with Weezer as the headliner.

2018 Prediction: You thought Prince’s and Bowie’s deaths were earth shakers, someone even bigger will be knocking on heaven’s door this year.

Reality: Mr. Zimmerman is still very much with us.

Reality: Almost all the bands mentioned released new material in 2018.

2018 Prediction: Director Alexander Payne will be so bowled over by the area’s music scene that he not only will try to integrate Omaha music into one of his upcoming films, he’ll begin work on a movie based loosely on the Omaha music scene circa 2003.

Reality: I still think it’s a helluva idea, and I know where you can find a screenwriter, Alexander.

Prediction: First it was vinyl, then cassettes and now even 8-tracks. Next year crazed music aficionados will take it one step further as we see the first album released on reel-to-reel tape.

Prediction: You thought having concert tickets on your iPhone was handy, watch out for facial recognition tickets. By submitting your facial profile to Ticketmaster, checking in at a show will be as easy as looking into a camera.

Prediction: A savvy concert promoter will organize a new Lilith Fair next year that brings together every hot indie female-led act for a traveling tour. Among them female indie supergroup boygenius, Saddle Creek’s Big Thief and Hop Along, Mitski, Noname, Eleanor Friedberger, Courtney Barnett and, of course, the return of Sarah McLachlan.

Prediction: Speaking of Saddle Creek, with the return of The Faint to the roster, expect an even more surprising new release from another of the label’s first-generation superstars.

Prediction: For years the Hi-Fi House flew under the local radar before finally going public. This year a national publication will discover the project and bring it to the attention of a world-wide audience.

Prediction: As times get tougher for musicians, watch next year as the number of GoFundMe campaigns rise, including from some very well-known artists. They won’t be asking you to fund recording projects; they just need to pay their bills.

Prediction: At least one major, respected rock artist will come out in 2019… as a Trump supporter, and the fallout will make even Kanye blush.

Prediction: Because of the advent of streaming services, more and more vintage (i.e., ancient) artists will enter the Billboard Hot 100 as a new generation of listeners discovers them via television commercials or film soundtracks. Everything old is new again.

Prediction: As we mourn the passing of Almost Music a new record store will open in 2019 either downtown or in Benson operated by another well-respected member of the local music community. The shop will feature the same high-quality curated new and used stock, and will quickly become “the place” where musicians and young fans hang out.

Prediction: A very famous candle in the wind will be extinguished in 2019.

Prediction: Finally, one of Saddle Creek Records’ new era artists will do what no other Creek artist has been able to do: Be the musical guest on Saturday Night Live. Can you guess her name?