The Thursday early blues shows presented by the Blues Society of Omaha at Chrome Lounge kick off November with the return of the Heather Newman Band. Newman, now based in K.C., was just selected to represent the Kansas City Blues Society in the International Blues Challenge in Memphis in January 2019.

Thursday, Nov. 8, the Michael Charles Band featuring native Australian guitarist Charles plugs in at Chrome. Thursday, Nov. 15, East Coast bluesman Bobby Messano performs. Messano is a veteran musician who has worked with a number of artists including time as music director for Steve Winwood and touring with Lou Gramm (Foreigner). Messano’s recent solo blues CDs have been recognized with a Blues Blast Music Award nomination and time on both the Billboard Blues Top 10 and the Roots Music Report’s Top 40 blues-rock albums.

There is no show on Thanksgiving night, however the BSO and the team at Chrome are putting on a special Thanksgiving Eve show with blues guitar star Coco Montoya playing Wednesday, Nov. 21, 6-8:30 p.m. at the nearby Stocks n Bonds venue created by the owners of Chrome. Stocks n Bonds is in the former Brewsky’s space just south of Chrome. Stay in the know about BSO presents shows along with a curated list of many area blues and roots performances at OmahaBlues.com.

The Blues Society of Omaha completed its annual Blues Challenge and panels of judges following the Blues Foundation’s judging criteria selected Stan & the Chain Gang (band) and Matt Cox (solo/duo) to perform in Memphis at the International Blues Challenge (IBC) in Jan. 22-26 2019. At the IBCs, they will have the opportunity to perform alongside over 250 acts from around the world. The event is a great platform for artists looking to expand their national touring and recording presence. Past BSO representative the Hector Anchondo Band made it to the prestigious final eight performers in the 2016 IBCs. For more information on the IBCs visit blues.org/international-blues-challenge.

Thursday, Dec. 6, Lincoln’s Zoo Bar partners with the Toy Drive for Pine Ridge to host a benefit show for the cause. Playing from 6-10 p.m. are Lash LaRue & The Hired Guns and the Levi William Blues Band. There are a number of events in November and early December to raise money for toys for the children on the Pine Ridge reservation at Christmas. The charity also needs donations for the emergency heat fund that keeps elders and families supplied with propane when they cannot afford to purchase their own during the bitter winter. For more about Lash LaRue’s Toy Drive for Pine Ridge, details on all the events and official drop-off sites where you can donate toys see toydriveforpineridge.org or Facebook.com/toydriveforpineridge.

A highly anticipated rockabilly and roots holiday show Tuesday, Nov. 27, 7:30 p.m., brings some high octane acts to The Waiting Room when Horton’s Holiday Hayride rolls into town. The lineup features The Reverend Horton Heat with special guest Big Sandy plus honky-tonk guitar master Junior Brown and seminal American roots-rockers The Blasters with Phil Alvin front and center, Keith Wyatt on guitar and the original rhythm section of Bill Bateman and John Bazz. See onepercentproductions.com for details on all these shows. 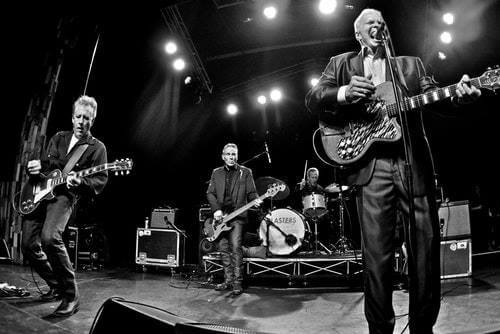