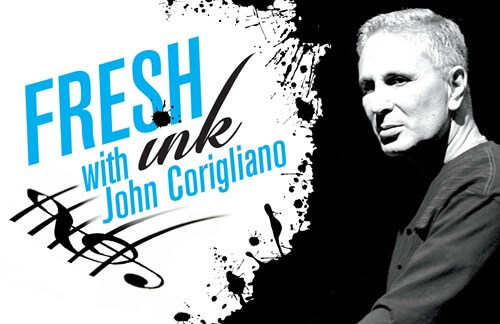 The Old Market is certainly known as Omaha’s happening place. No surprise, then, that it’s a site for something new, entirely fresh: a concert on May 16 at Kaneko of music of today, works in progress, written by people still emerging into the light. They are composers in their mid-30s, whose studies continue even while their careers already show promise.  They are the focus of Fresh Ink, a seven-year project fostered by the Omaha Symphony Orchestra dedicated to making sure such creations flourish and prosper.

A great reason to be there yourself is the presence of celebrated American composer John Corigliano, winner of a Pulitzer Prize, an Oscar, and five Grammys. And to hear his music as well. Live.

“I enjoy working with young composers,” Corigliano says. He has long admired and fostered careers of people from earlier generations. As Composer-in-Residence in 1987 with the Chicago Symphony, aside from writing his own new works, he was charged with choosing new scores for performance by the Orchestra. “I think that we should be of assistance to all composers,” he told Chicago classical music broadcaster Bruce Duffie.

Corigliano will certainly talk about his own music at the concert, doing so with Omaha Symphony Music Director Thomas Wilkins. “But remember, the evening is not about John,” Wilkins points out. “It’s about these young people.”

Both men selected the music to be heard. Through a national call for scores, the work of four emerging composers was chosen for the program. Over the course of several days prior to the concert, they get the opportunity to develop and incorporate Corigliano-stimulated changes in what they’ve written before the final performances. This rare concept is actually a real-life laboratory which also involves the 39 member core of the Omaha Symphony.

Ticket holders are invited and encouraged to attend two day workshops to personally experience the creative process in action and to witness the evolution of something so new—from first reading to final performance.

Why here? “I’ve wanted the community to have a sense that we all can nurture such creative people to have an ownership of something not yet at all familiar, rather than being afraid of it,” Wilkins explains. “This completely changes how an Omaha audience approaches such music, seeing that, we are part of a vanguard.”

The idea for this project originated with him. “Years before I arrived here, the Symphony Guild sponsored a new music festival. I suggested that we do it again, but in a different way— to create a place where young composers could have their works realized under the watchful ear of a very well-established living American composer. We give them the time with the Orchestra and the support from the Guild.”

He and Resident Conductor Ernest Richardson made the overtures to the already established composer in what was first called “The New Music Symposium.” Michael Daugherty came in 2008, Joseph Schwantner in 2010. William Bolcom was the man in 2012 when the series was renamed “Fresh Ink.” That new title suggests many kinds of media in progress, appropriate to the setting of Jun Kaneko’s Old Market studios.

“The partnership is a natural fit.  It really allows us to elevate the program and create a unique experience,” comments Adam Goos, the Symphony’s Vice President, Education and Community Engagement. He adds, “We’ve realized how interesting are the creative processes and new music to so many of our patrons and to the community at large. But, at the same time, at its core, this is an educational program, the primary concern being the experience for the composers.”  Goos is responsible for administrative aspects of the event, saying, “At the end of the day, I’m just implementing Thomas’ vision with the rest of the staff.”

So, you may ask, “What’s new?”  There is [pskh] by Chicago-based, Istanbul native Alican Çamci, inspired by 2013 protests in his homeland. He says that he derives his ideas from both inside and outside Western classical music. He was born in 1989, three years after Brooklyn-based Brendon Randall-Myers, who’s also a guitarist and likewise active in experimental rock and free improvisation. His piece is Indefatigable Optimism. Korean-born Yie-Eun Chun (1985) wrote A Little Puppet Play. She just had a premiere in April of Read My Riddle performed by Indiana University New Music Ensemble as well as Game of Fives by Munich’s Breakout Ensemble in January. And, from Bangkok, comes Arsid Ketjuntra (1983) who is much involved in digital sound synthesis, studying, he points out, Psychoacoustic and Music Cognition. He also writes acoustic pieces. Such as this one, Up On The Hill, Below The Clouds. FYI: This event’s requirements are for works solely for chamber orchestra or chamber ensemble. No electronics, MIDI, digital technology or “sound reinforcement.”

Note the composers’ ages. They match the requirements for submission of works: These people must have been born after January 1, 1980. Further, they have to be U.S. residents enrolled as full-time students in college or university degree programs. All of them have had other music performed elsewhere before coming here, including at the Asia-Europe New Music Festival 2014, the Bang on a Can Summer Festival, the Beijing Modern Music Festival 2013-2014, the Norfolk Summer Festival, USF New Music Festival 2014, and by such groups as the Eastman Sinfonietta, Musica Nova Ensemble, Tanglewood New Fromm Players, and the Yale Contemporary Percussion Ensemble.

As for how their music should sound, Corigliano notes, “I certainly try very hard not to let style be an influencing factor and try to find a piece that in some way speaks to the concert hall audience. For any composer to look at another composer’s work and try to be fair is a great problem; to be a composer is to be someone with strong views. If you don’t have strong views, you can’t write strong music of any kind. But the piece must speak to me as well.”

The concert portion of the “Fresh Ink”  project also features Corigliano’s own Voyages for flute and orchestra from 1971.  Appropriately, he wrote it when he was about the same age as these newcomers. “It will sound very tame in this context,” he adds. “But it doesn’t represent what I am doing today.”

“I’ve loved the demographics of our audiences,” Mr. Wilkins enthuses. “All over the place. From young to old. I had college kids who were cashiers in grocery stores telling me how much they’ve enjoyed this series. I think having this in the Old Market is especially drawing young people. By offering wine and beer during the performances, we’re creating a new gathering, rather than just a concert.”

Being in Kaneko, he adds, is “a good alternative to a concert hall. There are people who hang out in the Old Market but don’t go to concert halls. This is for them another place to get together.”

Of course, Mr. Wilkins is very familiar with Corigliano’s compositions, having led the Omaha Symphony in the fiery Gazebo Dances this past September. He also conducted the Grammy Award-winning Percussion Concerto Conjurer at San Diego in 2011 and another Grammy winner, the Symphony No. 1 with the Detroit Symphony Orchestra in 2007.

Wilkins doesn’t want anyone to think that this whole concept is his alone. “Basically, it’s my colleagues in our offices who turned this idea into a happening.  They deserve the credit. The last time we did it, it was the coolest thing in the world.”