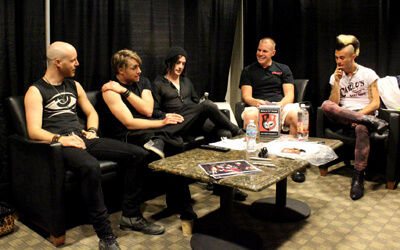 The Nickelback Here and Now Tour was in Omaha on Tuesday, May 22nd and along with them, Bush Seether, and My Darkest Days were in town on the tour. This has been one of the most anticipated tours of the late spring, early summer. If you were at the CenturyLink Center in Omaha, NE, on the 22nd you would have seen why. Nickelback and the other bands that performed played in front of a packed arena. The stage setup was very intricate and the pyro and lights amazed many of the people in attendance.

Nickelback always puts on a great show as we’ve seen in the past as they’ve brought their show to Omaha. It seems that on every tour though, they seem to try and top the last one. Each time it seems like they manage to do so too. Starting off the night were the guys in My Darkest Days. Even though they only played four songs for their setlist they had the crowd singing along and dancing to their music.

Next, Seether took the stage playing eight songs which seem to be a greatest hits setlist. They were a great performance as well as the next band, Bush.  Gavin Rossdale, the lead singer of Bush, even went all the way around the arena in the crowd while singing the famous Beatles song, Come Together. Then finally, Nickelback proved to put on another fantastic show. Halfway through their set they went toward the back of the arena and got on a moving platform that raised them up and spun them. That was a nice touch to their show so the people in the back could see the band for a few songs a little better.

Backstage with My Darkest Days: http://www.youtube.com/watch?v=8YlbzWHkQ10