Home » Music » Omaha’s jazz past, present merge at The Jewell 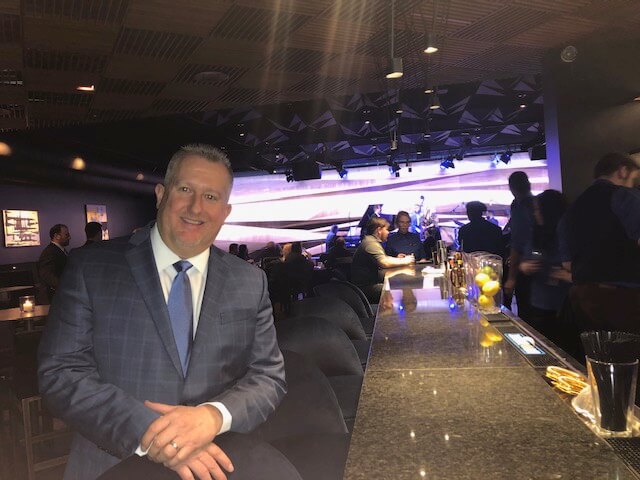 McKenna’s appreciation for North O’s legacy music scene is evident throughout the swank space. Oversized reproductions of archival photos picture icons who played the Dreamland Ballroom. The black and white images add warmth to an already intimate room distinguished by a contoured stage backdrop meant to represent a jewel’s kaleidoscopic patterns. The club takes its name from Jimmy Jewell Jr., who booked the killer acts that made the Dreamland on North 24th Street a venue of some renown in jazz circles.

Dreamland operated on an upper floor of the Jewell Building, which today is home to nonprofit agencies, and back in the day housed a street-level barber shop and pool hall. Leave it to a transplant from New York to put the Dreamland, which closed in 1965, front and center again. McKenna, an Eastman School of Music graduate, first learned about the venue in school. He was intrigued how it was a Midwest circuit stop for touring legends Louis Armstrong, Duke Ellington, Count Basie, Dizzy Gillespie, Nat King Cole, Sarah Vaughan, Dinah Washington, Lionel Hampton and many more.

“To revitalize it a little bit is kind of cool. That’s why I called it The Jewell – to bring that back and to do right by North Omaha,” said McKenna, who’s located his club in the Capitol District to take advantage of folks staying in downtown’s 3,000 hotel rooms. Besides, North Omaha already has Love’s Jazz and Arts Center.

Still, he said, “This is not going to happen without North Omaha’s blessing. I have 11 investors from different pockets of the city, including North Omaha. I’m taking ads out in the Omaha Star. I’m trying to really embrace this authentic storyline, so that we can work together to make sure this is a community celebration.”

He wants The Jewell to be a platform for sharing this undertold narrative about North O’s live music culture.

“Along the way I’ve been telling this story and a lot of people don’t know this story. To keep it genuine, we’ve got to really spell it out.”

When McKenna and his Fremont, Nebraska, native wife moved to Omaha in 2015 to raise their daughter, he researched Jimmy Jewell Jr., the Dreamland, other historic local music hives and the many noted musicians who resided or visited here. Once The Jewell idea crystalized, he sounded out North O leaders (Mike Maroney, Al Goodwin) and players (Curly Martin) for their knowledge and approval in creating a venue that’s both tribute to the past and showcase for established and emerging talent.

Having left Sony in 2008 to form his own music management company, McKenna Group Productions, which he operates out of Omaha and New York, and fueled by his fascination with the history here, he found a project to challenge himself.

“I figured out something that wasn’t here at the level I thought it should be and that was a proper sit-down, fine-dining music venue,” he said. “But I knew it wasn’t going to work unless we really found the thread – and that was North Omaha.

“We’re going to hopefully carry that torch and really expose what used to be and try to bring some people back and then deliver that to future generations. The next generations need to know that this was a great scene, a beautiful scene. There’s a huge story there.”

McKenna marvels at what Jimmy Jewell Jr. did.

“He was able to get the biggest names. I mean, c’mon, man. It’s not easy to convince managers and agents,

McKenna’s collecting stories. How on an extended Omaha stay, Nat King Cole wrote the hit “Straighten Up and Fly Right” – “I’ve got some artists that will be doing tributes to Nat King Cole” – and how artists arrived by bus and stayed in private black homes or black boarding houses, lionized by adoring neighbors. After gigs, star musicians jammed with local players.

McKenna digs how Count Basie hired Preston Love Sr. at the Dreamland to tour with his orchestra and how Anna Mae Winburn headlined there and later led the International Sweethearts of Rhythm all-female swing band that McKenna studied in college.

“We need to talk about this,” McKenna said. “We’re going to really be celebrating the historical sense but also bringing the new players, too, like Esperanza Spalding and Christian McBride. Every time I go back East and talk to them about North Omaha, they’re like, ‘Oh, yeah – there was a scene there.’ We’ve got to put the spotlight on that. That’s what I want to do. On our social media we’re posting a lot of that historical stuff. We’ve got to educate folks that we had this here.”

He’s also insisting artists make pilgrimages to the Jewell Building, whose display of photos from the Dreamland’s heyday, said McKenna, “gives me chills.”

David Sanborn is eager to learn.

“I’m sorry to say I’m unaware of the history of jazz in Omaha. It’ll certainly be new to me and an interesting experience,” Sanborn said.

McKenna’s taking steps to immerse visiting artists in the community by contractually requiring they do outreach through master classes or workshops. “I have relationships with UNO, the Holland Center and Love’s for this educational component.”

His support of the local music community extends to reserving Wednesdays for area performers.

With programming, the club’s “not going to be a hundred percent jazz,” he said, adding, “There are singer-songwriters coming through.”

The Jewell’s about good quality music, whatever the genre. Just no hard rock.

“It’s good to be diverse like that. Good music is good music.”

Further rooting the club to this place is assistant general manager Monique Alexander, a North Omaha native with a legacy connection to Duke Ellington as a distant cousin.

McKenna, who rose through the Sony ranks as a researcher, librarian and eventually vice president of audio operations and marketing, is applying his expertise to the endeavor.

“I felt I should do something that taps into that experience. Managing artists is great but you’ve got to do something in the community, too.”

His industry contacts with agents, managers and talent bookers should aid in attracting top-tier artists.

“We will get Wynton Marsalis out here, I guarantee you that. But the timing’s got to be right.”

He’s confident the club’s high standards of decor, house instruments (a Steinway piano, a custom Gretsch drum kit, a killer bass) and acoustics (a floating ceiling to isolate vibrations from above), combined with its historical focus, will attract name talents.

“They will do whatever it takes to perform at great venues.”

McKenna’s left nothing to chance.

“It needs to be nurtured and developed. It’s not going to be rushed. It’s gotta be done right. To put this together has not been an easy thing. It’s been very detailed-oriented. Every single move I’m making means something.”

The cozy, 150-seat venue boasts great sight-lines, with patrons only a few feet from the stage.

“When you’re that close it’s a different thing,” he said.

“That’s the treat – to be that close to these types of artists. They’ll talk to you in a different way than they will performing in a big house. That’s what I love about this club – it’s a whole different vibe.”

He’s leveraging The Jewell’s sustainability on business travelers-tourists as well as locals looking for a signature night out. The club, at 1030 Capitol Ave., is accessible from the Marriott and The Capitol Plaza.

It has its own dedicated chefs (Jon Seymour and Mark Budler) food and beverage director (Brent Hockenberry), hosts and servers in putting out its New Orleans-influenced menu.

“People of all different cultures and walks of life will congregate similar to what happened at the Dreamland Ballroom. People will come to eat, drink and hear great music.”

The club worked out the kinks during a soft opening that launched Jan. 17. Sanborn will help officially usher in The Jewell at a ribbon-cutting. He and his quintet will play 6:30 and 8:30 shows both nights, Feb. 6-7. Sanborn’s trademark alto saxophone will blend with acoustic bass, drums, piano and trombone in performing works from his repertoire and from the late jazz composer-instrumentalist, Michael Brecker.