Home » Music » On the Same Page 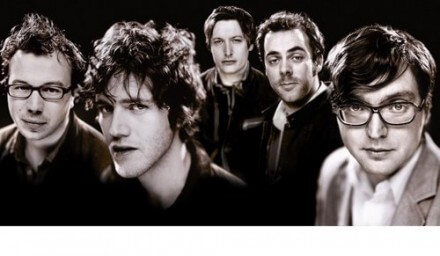 Over the course of six albums, Gomez have built a reputation for warping their Brit-pop sound with plenty of genre-hopping tics and off-kilter arrangements.

But the band had a new vision for its seventh album, the recently-released Whatever’s On Your Mind, guitarist/vocalist Tom Gray says.

It’s a very melodic record, he says. It’s a refined, streamlined take on what the band does. The band decided to follow where the music was taking them without over-intellectualizing.

“More than anything else, the songs that were being written led the way,” he says.

Gomez produced the record, with Phantom Planet’s Sam Farrar on hand to help. Gray says Farrar brought the melodic sensibility to make sure the band didn’t deviate from their new straightforward course.

“We brought Sam in to police us a little bit,” Gray says.

Gomez first turned heads when their 1998 debut record Bring It On won the Mercury Music Prize, a UK music award given to the best Irish or English music recording of the previous year. That album came marked with many of Gomez’s trademark moves fully-formed. Folk and blues smashed into classic Brit-pop melodies, while the band deconstructed and stretched their songs beyond simple structures.

Since 2006’s How We Operate, the band has worked with Dave Matthews’ ATO Records imprint, which helped introduce the band to new American fans.

So while previous Gomez records could come sound more like a compilation or cuts from a well-curated jukebox, this time the band sought to jump genres while holding to the entire record’s melodic directness.

“It’s a Gomez album so it’s all over the place,” Gray says. “So in the Gomez world, it’s quite a normal record.”

Gray says Gomez tries to avoid repeating themselves in the studio. With the song-first approach, it felt like they were doing something different.

With three singers and four songwriters, there’s plenty of material coming in. Gray says there can be

conflicts and confusion with so many creative inputs.

While often the songwriters seem to be traveling in different orbits, this time the orbits ran closer together, Gray says.

“Everyone was kind of on the same page,” he says.

Other times, the songwriters play off of each other, taking one member’s song and providing rewrites or arrangement ideas. Gray says the process always seems to be fluid and ever-changing.

“It’s never become formulaic,” he says. “One of the things we are squeamish about is falling into those patterns.”

“After the messiness something exciting can be formed.”

The songwriting arrangement means that record to record, different members can find their time to lead the way. People work in creative cycles, so when one songwriter isn’t as productive, another one can step in.

“Your time will come as a heavy lifter,” Gray says. “That’s the great thing about having so many writers in the band.”

Seeming incongruity has also been the name of the game for Gomez’s touring life, especially when it comes to Omaha.

The band has played the city multiple times. The last time was headlining a 2009 young adult-focused concert in Memorial Park, where they met then-Mayor Mike Fahey.

“We were slightly disappointed in meeting the mayor that we didn’t get a key to the city,” Gray jokes.

Prior to that show, Gomez had built a sizable Omaha cult after several successful club gigs. Gray says one of the things he’s always enjoyed is the fact that the band has built unlikely followings across the world. Gomez is on a short list of UK bands that could regularly play club gigs in Nebraska.

Meanwhile, the band could be headlining in a 500-person rock club, a larger theater or in a field for a festival.

Gray says he relishes the troubadour life, playing wherever. He still enjoys the intimacy of a club show. The band tends to sense the instant reaction of their songs on smaller stages.

“People tend to dance more in clubs,” he says.