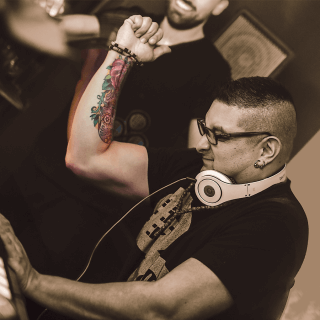 Well known DJ/producer Z Trip sells a T-shirt that reads “I AM A DJ” while Girl Talk’s Greg Gillis offers one that reads, “I AM NOT A DJ.” While it’s true the lines have been blurred since technology made making music a lot easier, there’s still a solid understanding of what a “real” DJ actually does, especially among other turntablists. According to DJ Rob Swift, formerly of the X-ecutioners, “At its most simplistic, a DJ plays music for groups of people or him/herself. But beyond that, a DJ’s roll revolves around being able to control people’s emotions through music.” Omaha-based DJ Dave Stutsman has been actively DJing since 1992, when he was a freshman in high school. He felt the same way as Swift described.

“Going to raves and house parties where other DJs were controlling the room got me into it,” Stutsman says. “I liked the power of the DJ. So I started watching their every move to learn the technique. DJ Halo from Chicago was at an Omaha party back in ’93. He brought me to see the power of music. The rest is history.”

Since then, the San Antonio native has settled into the Omaha music community. From his work with Omaha Night Life (ONL) to this year’s involvement with the Best in the Midwest Tattoo Convention, he always has one hand on a turntable. Although he is no longer with ONL, he’s still proud of its growth.

“I came up with the concept of Omaha Night Life when I was driving to a rave in Kansas City,” he recalls. “I was big into checking out message boards for the next DJ event and Omaha really had nothing. There was a void for information in the metro. I found some people that had the same vision. And we created something pretty cool. It got bigger then I ever imagined. I’m no longer with the company. I moved on to start my own businesses.”

For Stutsman, there is something working a “normal” job will never give him and that’s the feeling of lighting up a room with music. “I love the feeling I get when people go nuts to what I play,” he says. “That means you’re feeling what I’m feeling. That connection is irreplaceable. Track selection is key. You have to think ahead of what will continue to make this group dance and feel what you’re playing. I never plan out playlists because you never know what crowd you will have. I also love to be versatile. I do love doing open format gigs. I love playing the classic that people sing to.”

Over the years, DJing has taken Stutsman all over the country. Performing under his DJ Shif-D moniker, he’s played several Omaha clubs like House of Loom, Halo, Shark Club, Rehab Lounge, Lit Lounge, The Capitol, and Espana. He’s also played clubs in Cincinnati, Pittsburgh and other various cities. “I would be so bored not having DJing in my life,” he says. “I plan on getting into producing in 2014. I have all the toys to do it. It’s just a big learning curve to learn Abelton LIVE, but I’m determined to learn it.”

From February 7-9, 2014, Stutsman has the honor of being the house DJ at the Best in the Midwest Tattoo Convention, which is held in Council Bluffs. “I have been sponsored for DJing by Big Brain for a couple of years now,” he explains. “Big Brain owner Smitty came to me about being the house DJ for all their conventions. It’s been great getting to see new cities and play other clubs in America. I can’t wait to see what the future holds. This convention is top notch and will only get bigger. I love tattoos, and now even more. I’m also the webmaster for www.shaneoneillproductions.com. Seeing all this talent this convention brings is quite appealing. Plus, tattoos are addictive. I have 2 big ones planned.”

At this point in his DJing career, it’s clear he’s comfortable in his niche city of Omaha. He’s lived in the modest community since 1984. As a husband and father of (almost) two kids, his roots are firmly planted. “I love that there is so much talent,” he says. “The live music scene is so great. Omaha loves music and knows talent. That is why you see so many shows sell out in this town. The Faint could be my favorite band in town. They are doing something nobody else is in the world is doing. Icky blossom is also awesome. You can’t forget the hip-hop scene. Everyone’s doing big things.”

Stutsman has played all kinds of gigs and seen a lot of smiling faces, which he says overwhelms him with gratitude. “I love that I can bring money to my family and have fun doing it,” he concludes. It keeps me focused on doing a top-notch job. Making the people/client happy will only get you more opportunities to play more events.”