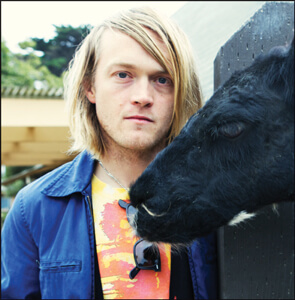 Adam Haworth Stephens steps out on Cliffs Adam Haworth Stephens’ windswept, gravelly croon has long been one of Two Gallants strengths. And while Gallants is “temporarily on hiatus” with “no plans to do anything right now,” Stephens used the downtime to craft the elegant solo record We Live on Cliffs. Released a couple of weeks back, the album has drawn mixed reviews with some finding it blasé and middle of the road and others toasting it’s engaging grooves and intelligent lyrics. I can see both sides: on the first couple spins nothing really grabbed me, but as I listened further I began to really enjoy the album’s sonic nuances and Stephens’ range as a singer, songwriter and instrumentalist. Like the two most recent Gallants records, Cliffs was released by local label Saddle Creek Records. Stephens, a San Francisco native, has found working with Creek a great experience. “They’ve been great,” he told me while gearing up for a tour opening for The Felice Brothers. “They’re great people and they have this nice, patient way of doing things. It’s like this calm envelops everything. I deal with a lot of people in this business and their mellow approach is definitely different.” Stephens is accustomed to working with Gallants partner Tyson Vogel, who also has a great solo record out. The chance to work solo and put together his own band and fulfill his creative vision proved to be rewarding and difficult. And while many artists’ solo records sound like a watered down version of their band, Cliffs has several cuts that would have no business on a Gallants project, but several others that do a decent job of highlighting the traits many of us love about his work with Gallants: an emotional urgency to the vocals, competent guitar work and lyrics that are more mature and developed than his previous work. “There were certain aspects of doing the solo record I really liked,” Stephens says. “I learned a lot working with a talented producer. I guess there are things I would and wouldn’t do in the future that I can take from the experience. Working with Tyson, we divided everything up pretty evenly. Working with somebody else can be kind of violating. I mean they’re my songs but somebody else is working on them.” Cliffs is a solid collection of songs, some of which are Stephens’ best work. “These songs were definitely for this record,” he says. “I wrote most of them a couple of months before recording. I had been playing quite a bit solo, it was really stripped down. And as I got closer to recording I wrote a bunch more songs, most of which are on the record.” His time playing solo, one man and a guitar on stage under the bright lights, served Stephens well as an artist, as evidenced by the new record. But the experience also led to a revelation for which many Gallants fans will be thankful. “When I started playing alone I knew immediately that I wanted to be playing with a band. So I gathered more people around me and kind of wrote those songs for that band. Then I played some more solo shows and realized again that I don’t really like to play alone. Playing reserved music by yourself at bigger venues when alcohol is involved is tough. It’s kind of hard to break through that.” Adam Haworth Stephens plays w/ The Felice Brothers and Con Dios Tuesday, Oct. 12, at the Waiting Room, 6212 Maple St. The 9 p.m. show is $12. Visit onepercentproductions.com.