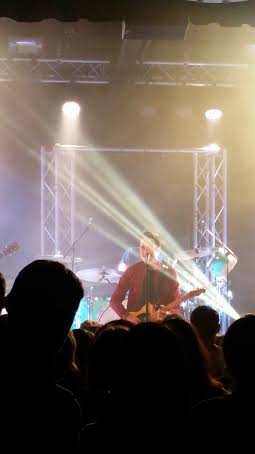 “She said, I’m in love with someone else she said I fell in love with someone else and I I’m in love with someone and that’s all that I know for sure.” How can such depressing lyrics make you want to jump and dance around? Because it is just how Parachute works. Their lyrical stories may be about breakups, missed chances, mistakes made, and love found, but when they add their upbeat instrumentals, your soul sings. It is a difficult thing to do, masking the stories behind the rocking tunes produced by the drums, piano, guitar, bass and saxophone. You read correctly, Parachute had a saxophone accompanying them on stage and wooooo, was it sexy.

Last night, Monday, Apr. 11 at The Waiting Room Lounge I stood, packed behind the sound equipment area with two of my friends, swaying to the guitar strums of Jerad Finck, the opener for Parachute. It takes guts to stand on stage alone. A man and his guitar singing to a sold-out house that is there for a different reason. Finck did not disappoint the crowd as he has a similar sound to Parachute and Jon McLaughlin, the second opener. I enjoyed his hit song, “Criminals” and although the title brought a graphic image to mind, “Blood in the Water,” was another great song.

Jon McLaughlin was up next and oh, can he sing. McLaughlin played the piano for most of his performance and was accompanied by a guitarist and drummer. He talked adorably about his flower shirt and made Omaha feel special saying he wore it just for us. I am sure he says this to all the cities he plays in, but last night he was ours. McLaughlin not only knew how to make us laugh and feel one of a kind, he knew how to make us feel the music. He pounded his fingers on the keyboard and encouraged us to help him sing during, “Don’t Mess With My Girl.” If you have not heard McLaughlin sing, look him up, but ladies, be careful.

Waiting patiently for Parachute to setup the stage, we sipped our beers discussing the undeniable fact of setting our early alarms for work. I have to stop attending concerts on weeknights, I feel old as I begin to yawn when 9:00 p.m. hits and the main act has just started their first song. Will Anderson, the lead singer of Parachute started rocking from the second he got on stage. He only stopped after three or four songs to talk to the crowd and ask how we were doing. We were great and wanted him to keep playing. The performance was a good mix of new and old songs. The band released their new album in March, it was a perfect way to experience their new sound. When playing some of their older songs, the band changed the tone. “She is Love,” was almost unrecognizable with a reggae sound. As much as I love the original, this version was easier to dance to and made for a better concert song.

During the song “Forever and Always,” Anderson stopped singing and invited someone on stage he said he had promised to help out. This man was a clear fan of the band and he introduced his girlfriend, another fan. She looked confused, shocked and excited to be sharing the stage with Anderson. The fan stated he knew his girlfriend wanted to meet Anderson, but he wanted to make the moment special. He got down on one knee and proposed, “I don’t know if I’ll ever be as good as you deserve, but if you let me, I’ll spend the rest of forever and always trying.” She accepted and they walked off stage together as Anderson finished the song strong. Many captured the experience on their phones and Anderson said the best part was he would always be in the background of those photos. Completely fitting for a band centered on love songs to be part of such a memorable moment.

Like any band that has been around for ten years, you expect them to grow and change with the times. Parachute has done this, but they haven’t lost sight of the type of band they are. The songs on their new album still have stories within the lyrics that sometimes do not match the upbeat sound produced from the band, and yet, it works. It worked for the band in 2006 and it is still working now. Omaha appeared to like it as they belted out the words to each song old and new. From the old, “Stay with me, baby stay with me” to the new, “I don’t want to fall asleep without you, I don’t want to take one breath without you.” Keep doing your thing, Parachute and please come back to Omaha, but maybe next time on a Friday night.