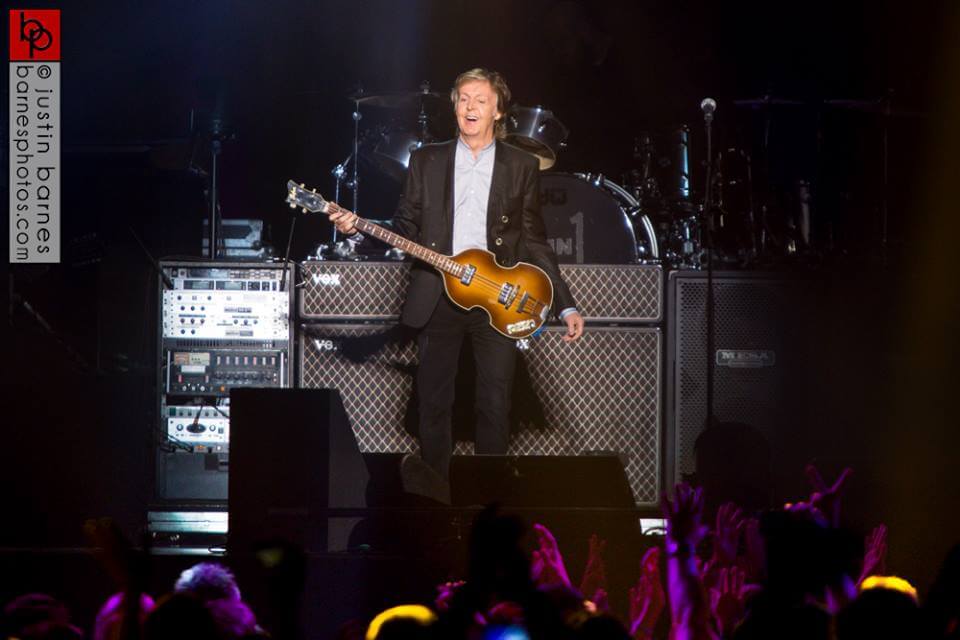 I know why Paul McCartney’s tour is called One on One – it’s because after it’s over, you leave feeling as if you’d just spent the evening hanging out with him, having a couple of singalongs and joking about old times. Even though in truth I had just spent the evening packed into the CenturyLink Center alongside thousands of other fans, I left feeling as though I was walking away from an evening spent with Sir Paul.

Here are some things you need to know if you plan to attend a Paul McCartney concert: people bring signs, and not just a few, but a bunch that are sometimes clever and sometimes annoying as they block your view. I saw at least four signs that begged, “Sign My Butt.” Thankfully, McCartney never pulled anyone on stage to sign anyone’s rear end, but he did pull a couple up that had signs asking for help in proposing. McCartney stopped at one point during the show to read some of the signs and chuckled at a few of them, admitting that he has to remind himself while performing to not stop and read signs so as not to get lost with the lyrics or music.

You also need to know that his fans are dedicated and don’t mind traveling to attend a concert. Before the show it felt more like a convention than a concert as mega-fans hugged and shared memories from previous concerts. It was a polite, jovial crowd of folks, varying in age but all equally excited to be there.

With a music career that spans more than half a century, McCartney knows a thing or two about putting on a good show. In fact, I’m going to make the bold proclamation that until you’ve seen McCartney and his band play “Live and Let Die” live complete with aggressive pyrotechnics, your schooling in true showmanship is incomplete.

“Let It Be” took my breath away. Earlier in the evening McCartney joked that when he played Beatles songs, the crowd looked like a starry night from all the cell phones in the audience and when he played other songs it looked like a black hole. So many cell phone lights went up at this song that it was like standing in a planetarium.

He played songs predating the Beatles (when they were The Quarrymen) and played plenty of Beatles tunes alongside songs from his band Wings. His tribute to John Lennon was beautiful and his tribute to George Harrison was played on a ukulele Harrison gifted him years ago. McCartney spoke openly about missing these friends and reminded the crowd about the brevity of life.

I’m well aware of the criticisms McCartney receives for his aging vocal range, but he hit some high notes I wasn’t expecting him to hit, and he did It well. While it’s true that his voice has some limitations, let me tell you what he can do: a three-hour show with no break and without forgetting any lyrics or missing a single beat. At one point during the show he unapologetically waggled his backside to the crowd, eliciting excited shrieks from the audience. So if you’re coming to his concert expecting to see a musician past his prime, struggling to keep up with the rigors of touring, you’ll be sorely disappointed.

This concert easily slides into one of my top spots of best concerts I’ve attended in my lifetime, and I’ve been to my fair share. It’s no wonder McCartney packs venues wherever he goes.