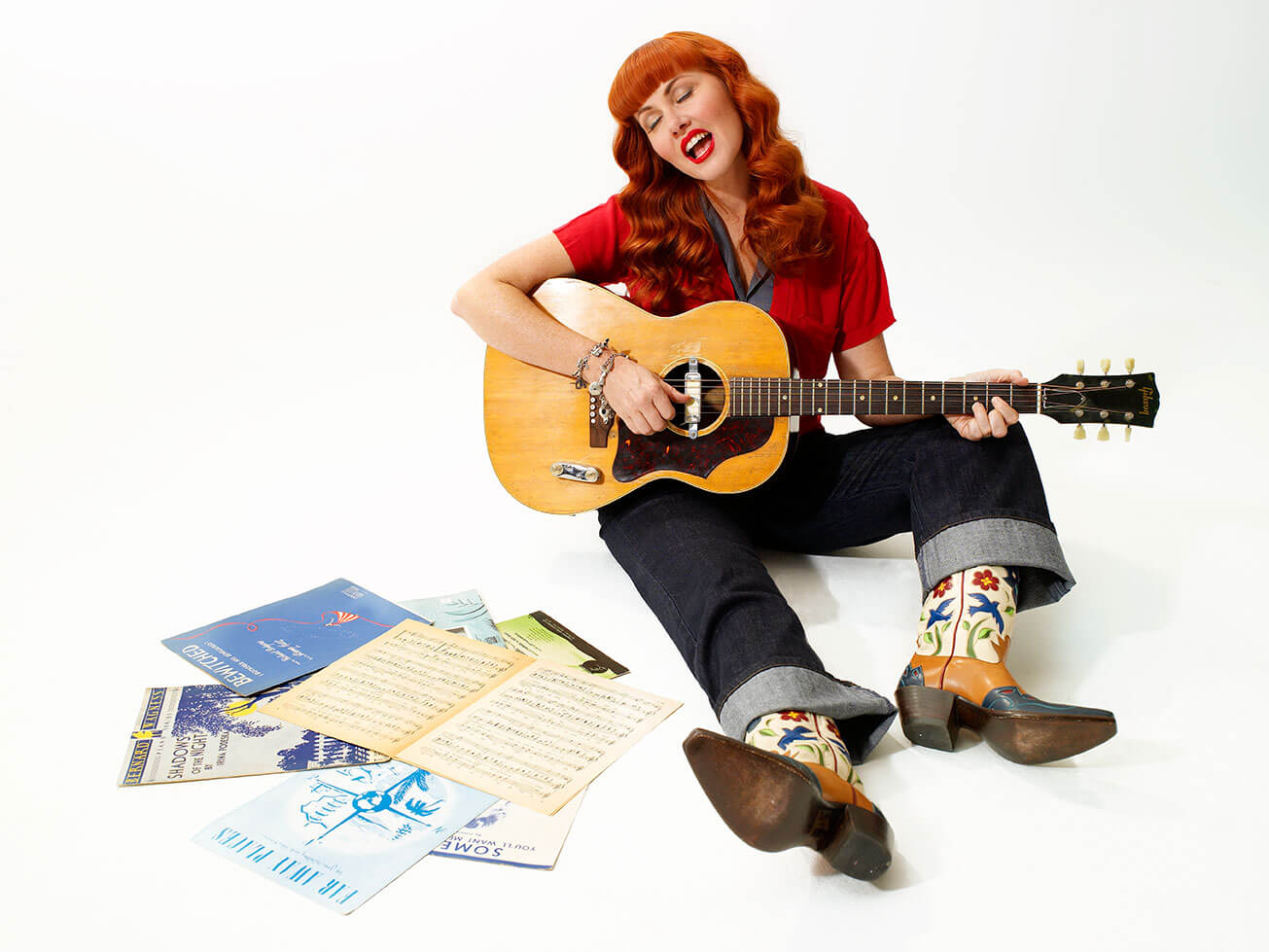 Remember Polly O’Keary & The Rhythm Method take the stage at The 21st Saloon Thursday, Aug. 27, 6-9 p.m. Fans know Polly as the vibrant, red-headed bass player for Too Slim & The Taildraggers over the last few years, but she is a singer-songwriter and bandleader in her own right. Reviewers compare her vocal approach to classic, popular blues singers like Koko Taylor, Etta James and Janis Joplin. O’Keary and the band are multiple “Best of” award winners in the Pacific Northwest including nods from the Washington Blues Society for “Best Blues Album,” Compass, “Best Female Blues Vocalist,” Best Songwriter” and a nomination for “Best Blues Bass. They also received the 2014 Inland Empire Blues Society award for “Best Blues Album” for Compass. See pollyokeary.com.

Then head on down to Slowdown for a big celebration of local soul music Thursday, Aug. 27, 8 p.m.  Check out the new fire coming from Josh Hoyer & Soul Colossal, just off a busy couple months of touring with special guest CJ Mills. Hear more from bandleader Josh Hoyer in this quick interview I did with him last week:  thereader.com/story/soul_power.

Also featured is new Omaha soul-R&B band Sam Ayer & The Love Affair, who I am excited to catch live. Their clip at facebook.com/samayermusic promises some old-fashioned horn-driven soul that should be a great fit with Hoyer’s music.

Mesonjixx is also featured. After the live show is done at Slowdown, the party moves next door to the Trapp Room for DJ-spun soul plus a visit from Maria Bonita’s food truck.

Josh Hoyer & Soul Colossal have a string of these-days-all-too-rare local appearances after tonight’s Omaha show. Friday, Aug. 28, they hit Tower Square in Lincoln, 6-7:30 p.m., then they hustle on over to The Zoo Bar for a late night set Friday. Saturday, Aug. 29, they are back in Omaha for the Toast of Omaha, where they play at approximately 6:30 p.m. Sunday they play the Omaha Jewish Community Center’s Backyard Concert Series 5-7 p.m.

Then Thursday, Sept. 10, 6 p.m.  the great powerhouse show of jump-blues, Chicago blues and swing with Doug Deming, Dennis Gruenling and the Jewel Tones is back. This will be their last tour stop in Omaha this year and this is a fabulous band, Deming is one of the best at the T-Bone Walker-Charlie Christian style of swinging blues and Gruenling is a master of the harmonica, particularly the meaty Chicago sounds. See Facebook.com/DennisGruenlingDougDeming.

They share the bill with award-winning blues entertainer Zac Harmon. Mississippi-born Harmon has been called “a masterful musician and performer of the blues” by

The Blues Society of Omaha hosts the fifth annual Nebraska Blues Challenge in September and October.

The Registration Deadline is just around the corner. Registrations must be received by Tuesday, September 8. Bands must be available to perform on one of the preliminary round Dates: Sept. 13, Sept 20 and Sept. 27 as well as at the final to be held Oct. 4. (Note, I incorrectly listed the finals date as Oct. 11 in last week’s write-up.) The top three bands from the preliminary rounds advance to the finals. Judging is based on the criteria used by the Blues Foundation’s International Blues Challenge. The band receiving the most points at the end of the final round goes on to represent the Blues Society of Omaha in the International Blues Challenge in Memphis January 26-30, 2016.

Readers of this column should know that when I am persistently in your ear, this is going to be something special. See the September print edition of The Reader for more on versatile, swoon-inducing crooner Johnny Boyd and his great band. They’ll put down a mix of musical styles from jump and swing to jazz and blues and more, built for dancing and with world-class musicianship and plenty of fun. (Ok, I lied, that was more than 11 words, but trust me.) johnnyboyd.com.

Denver keyboard man Andy Sydow is back at The Zoo Bar Friday, Aug. 28, 5-7 p.m. Sydow plays a swampy, Louisiana style blues with jazz inflections that is mighty fine. See andysydow.com. Remember Josh Hoyer & Soul Colossal bring it on for the after 9 p.m. show on Friday. Check zoobar.com for all the latest.

Remember you only have a few more days to get your nominations in for this year’s Omaha Entertainment & Arts Awards. Nominations are decided by public vote along with input from local experts. Go to  oea-awards.com before Aug. 31, or send your fans there. One vote per person. Help support your local favorites by voting for their nomination. Winners are selected by judging panels composed of respected scene watchers and contributors. The awards will be announced in the official OEA ceremony Jan. 17, 2016.

Matt Whipkey has been making a buzz with a string of opening slots for Dwight Yoakam after his band opened for Yoakam at the legendary Surf ballroom earlier this summer. Follow the latest on Facebook.

Alan Mansfield was a beloved member of the Omaha music scene, though not part of the blues scene, he was best known as a guitarist for the band Witness Tree. He lost his battle with cancer July 30. His friends join with Reverb Lounge to host A Celebration of Alan Mansfield Friday, Aug. 28, 8 p.m. Performing are RAF, Bullet Proof Hearts, Matt Whipkey, Mother Molly & The May I’s, A Fight Within the Mastersleep and Lift Ticket. Tickets are $10 and available at etix.com. Proceeds from this night will go to the Mansfield family.

Folk-Americana singer-songwriter Una Walkenhorst is from Kansas City. If that name sounds familiar, she’s the daughter of Rainmakers’ lead singer Bob Walkenhorst. Una is out on tour and hits the Barley Street Tavern next Friday, Aug. 28, with Blakk Mantra, Garfan and Altura. See Facebook.com/unawalkenhorst.music.

Other just-announced shows include the raucous rockabilly of the great Kim Lenz Wednesday, Sept. 16, 9 p.m. at Reverb Lounge. She puts down a real-deal, old school sound. She’s a 20-plus year veteran of roots music who is as vibrant and sassy today as ever. She was the 2015 Ameripolitan Music Award Winner for Female Rockabilly Artist of the Year. See kimlenz.com. Nick Moss Band brings their hard-driving, guitar-fueled blues to The 21st Saloon Saturday, Sept. 26, 6 p.m. for a special non-Thursday show. Moss’ latest album has been a huge favorite with critics and fans alike. Time Ain’t Free received a spot in Guitar World’s “50 Best Albums of 2014.” See nickmoss.com.

Also on the bill are Freeway (Australia) and Nebraska’s own OK Sisters. See playingwithfireomaha.net for more including other select dates Simone will play in the area.