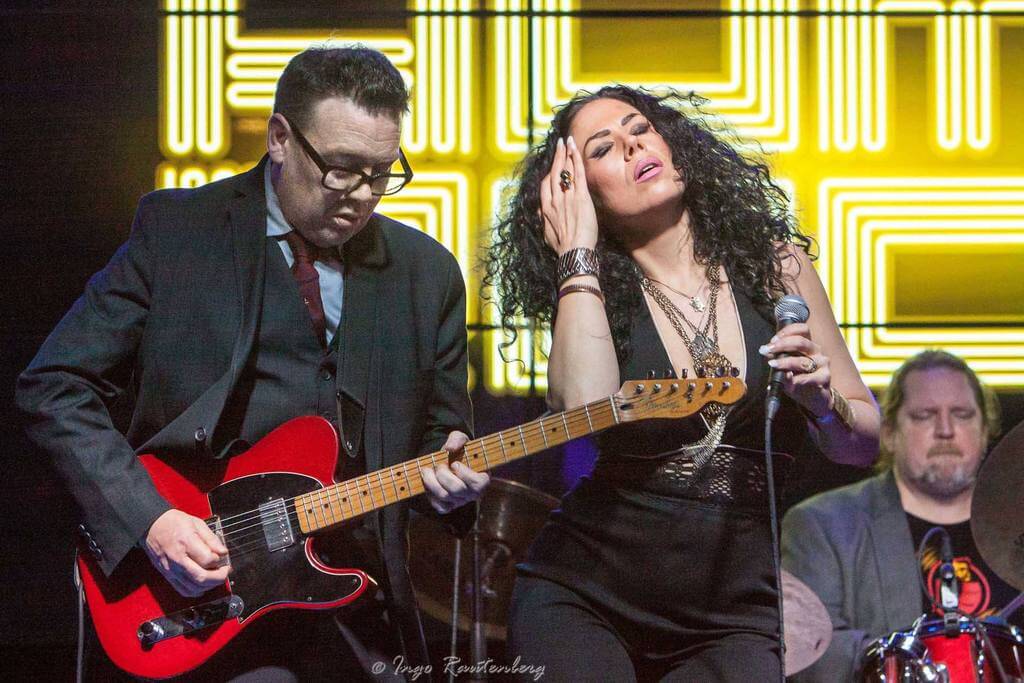 Laura Rain & The Caesars make their Zoo Bar debut Wednesday, July 29, 6-9 p.m. This band is one you are going to be talking about in the months and years to come if you are a soul-blues fan, so get yourself in on the ground floor and check them out. They knocked out The 21st Saloon audience that saw their show in early June. The band is from Detroit so they come by their soul roots naturally. Rain is a powerful and emotive vocalist who also has a flair for drama and entertaining the crowd. Guitarist George Friend’s jazz-inflected R&B styling is sensational and smart, but not in your face. Friend also co-writes with Rain and produced their 2013 disc Electrified. On disc the band includes a horn section, they are currently touring as a four-piece but make no mistake, Laura Rain & The Caesars have got it goin’ on. You will be hearing more about this band.

One reviewer says “This is Memphis soul, Chicago blues and Motown Funk, all in a Detroit Motor City vehicle that is flying up the highway. Grab a seat while you can.” See laurarain.net for more reviews, background info and to hear tracks from the band’s last CD. Their latest recording, Gold, is due out in September. Do yourself a favor and go hear this band.

Swinging’ & Jumping’ the Blues with Doug, Dennis & The Jewel Tones

Hoodoo favorites Doug Deming & The Jewel Tones featuring Dennis Gruenling are back for a special show at The Zoo Monday, Aug. 3, 7-10 p.m. This band is another big personal favorite that combines stellar jump-blues with meaty Chicago blues for a one-two punch carried out by guitarist Doug Deming and harmonica master Dennis Gruenling with the great rhythm section of The Jewel Tones. I’ll have more on this show and the upcoming weekend shows coming at you soon, but mark your calendar now for this great show Monday night at The Zoo. You can also catch these great VizzTone recording artists in a just-announced, special FREE show Friday, July 31, at Barley’s 114 W Broadway, Council Bluffs, 9 p.m. A serious Hoodoo favorite, take advantage of one of these opportunities to see these excellent players throw it down!

Scott Keeton is back in town for a gig at The 21st Saloon Thursday, July 30, 6-9 p.m. Oklahoma-based Keeton is a long-time local audience favorite. His blend of rockabilly, roots, blues and even rock make for an always-danceable show. Keeton also plays Friday, July 31, 5-7 p.m., and Saturday, Aug. 1, 6-9 p.m., at The Zoo Bar.

Josh Hoyer & The Shadowboxers take the stage at Stranksy Park Thursday, July 30, 7-9 p.m. for the final offering in this summer’s free concert series. The band is about to hit the road for an 8,000 mile August tour that will take them through the upper Midwest, some western plains states, parts of British Columbia, the Pacific Northwest and the SFCA Bay area. See joshhoyerandtheshadowboxers.com.

And one more note before I wrap up installment one of this week’s live roots music info, The Sunday Roadhouse is back on Sunday, Aug. 2, with Red Molly at Waiting Room Lounge, 5 p.m. This female trio seems to be the up and coming darling of the Americana-roots scene. They take their name from Richard Thompson’s famous song and they are being heard around the U.S. And at folk festivals from Australia to Denmark. They are praised for their beautiful harmonies and their joyous performances. See sundayroadhouse.com. Check out redmolly.com to hear tracks from the artists.

And watch for an expanded part two of my weekend to-dos.