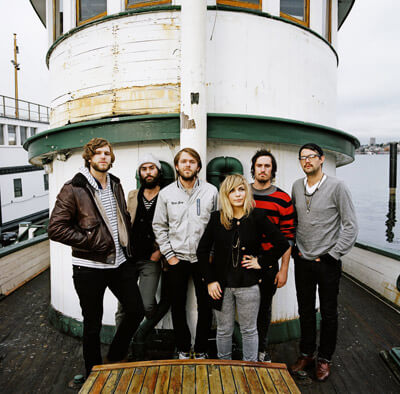 Josiah Johnson is still stoked on the response his band, the Head & the Heart, got at their Omaha show in June.

The Seattle-based band was in the middle of a run of dates opening for Iron & Wine. The crowd at the Slowdown, 729 North 14th St., seemed to keep cheering and cheering after Johnson and his band mates finished the final song of their set.

“It was mind-blowing,” he says. “There was an energy that shouldn’t have been there for an opening band.”

Now the band will return to Omaha, playing a sold-out show at the Waiting Room Lounge, 6212 Maple St., as part of their quick rise from two songwriters in Seattle to the hottest new band on Sub Pop Records roster.

Johnson moved to Seattle some three years ago and started playing an open mic night at a pub. He quickly met Jonathan Russell, who had recently moved from Virginia, and the two started playing on each others songs.

As they met other people, they formed a loose collective of musicians.

“There wasn’t really a line-up,” Johnson says. “The focus was on songwriting and not really being a band.”

However, during the course of about a year, guest musicians like Charity Rose Thielen became regular contributors, adding their personalities to the songs instead of just playing along, Johnson says.

They had tons of songs written by the time they were ready to play shows, so they recorded right away.  They recorded songs with plans for an EP and a subsequent tour. They recorded a full album, then burned copies onto homemade-sleeved CD-Rs for the tour.

“It was kind of ramshackle. We made our own shirts with block printing,” Johnson says.

That was the first step towards a self-made rise for the Head & the Heart. The CD-Rs were eventually replaced by a professional run of the self-released self-titled album, which had blockbuster sales at Sonic Boom and Easy Street Records in Seattle. KEXP in Seattle embraced the band, eventually rotating every song on the album through the station’s play list.

The band that had only played 10 or so Seattle-area shows when their album first came out in the summer of 2010, began playing every two weeks or so for about five months. The crowds kept growing.

“They didn’t get tired of us, which is a pretty good thing,” Johnson says.

Once the album became a fixture on Sonic Boom’s best sellers list and on KEXP’s play list, the band started fielding calls from managers and record labels. A booking agent got the band gigs opening for Vampire Weekend and others. They eventually signed with local legend, Sub Pop Records.

“Because it came out of nowhere, every step along the way was  a surprise,” he says. “I keep being wowed at how well it’s gone.”

By the time Pitchfork decided to issue a weak-kneed criticism of the disc, the band had gotten in front of enough people that word-of-mouth drowned out the mercurial indie website’s review.

Johnson says the review was kind of a badge of honor and proof that the band’s music would stand on its own.

“They trashed our album, we must be doing something right,” he says.

Now that the band mates have settled in with each other; and having had an exciting dose of success, the songwriting process has turned from being the product of two separate songwriters to being much more collaborative.

The band gathers snippets of songs written by both members and works them into whole songs, often eschewing the typical verse-chorus-verse format.

It’s a fun process to cull together songs as a group, he says.

After their fall touring they plan to resume writing. There are tons of parts, but Johnson wants to write some at home as well, so the band will have more than songs from the road.

It’s been nearly two years since they recorded most of the songs on their debut, which Sub Pop re-released earlier this year, and the band already has a lot of new song options. However, they won’t be quite ready to jump into the studio to write a second album.

“We don’t have a batch of fully written songs,” Johnson says. “There’s a growing list of those puzzle pieces.”

The Head & the Heart w/ Thao & the Get Down Stay Down and the Devil Whale play the Waiting Room Lounge Sunday, October 9th at 9 p.m. The show is sold out. For more information, visit onepercentproductions.com.