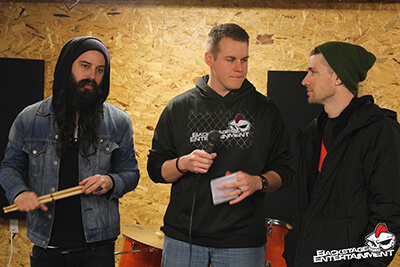 First, we went to The 402 to interview Joey and John from Red Jumpsuit Apparatus. Never doing an interview yet at The 402, we got to interview the guys in a basement room with windows so fans could watch during the interview. The guys talked about their 4th studio album that will be out on July 4th of this year titled “4.” They are headed to the studio soon to start recording and are excited to get the new music out to the fans.

Next, we headed downtown to the Slowdown to catch T. Mills for an interview a half an hour before going onstage. T. Mills was very humbled by how much attention his social media is getting and explained how all of his posts come from him by either his cell phone or computer. He loves engaging with the fans which you could tell by the end of the night, he let a lot of fans from the crowd onstage to help with his last song.

One thing that we like to do for fans is show what an artist does before taking the stage. T. Mills gave us that opportunity that night to show what it was like just before he went on. Make sure to check out the links below to watch the interviews, backstage footage, and see the photos from the night.