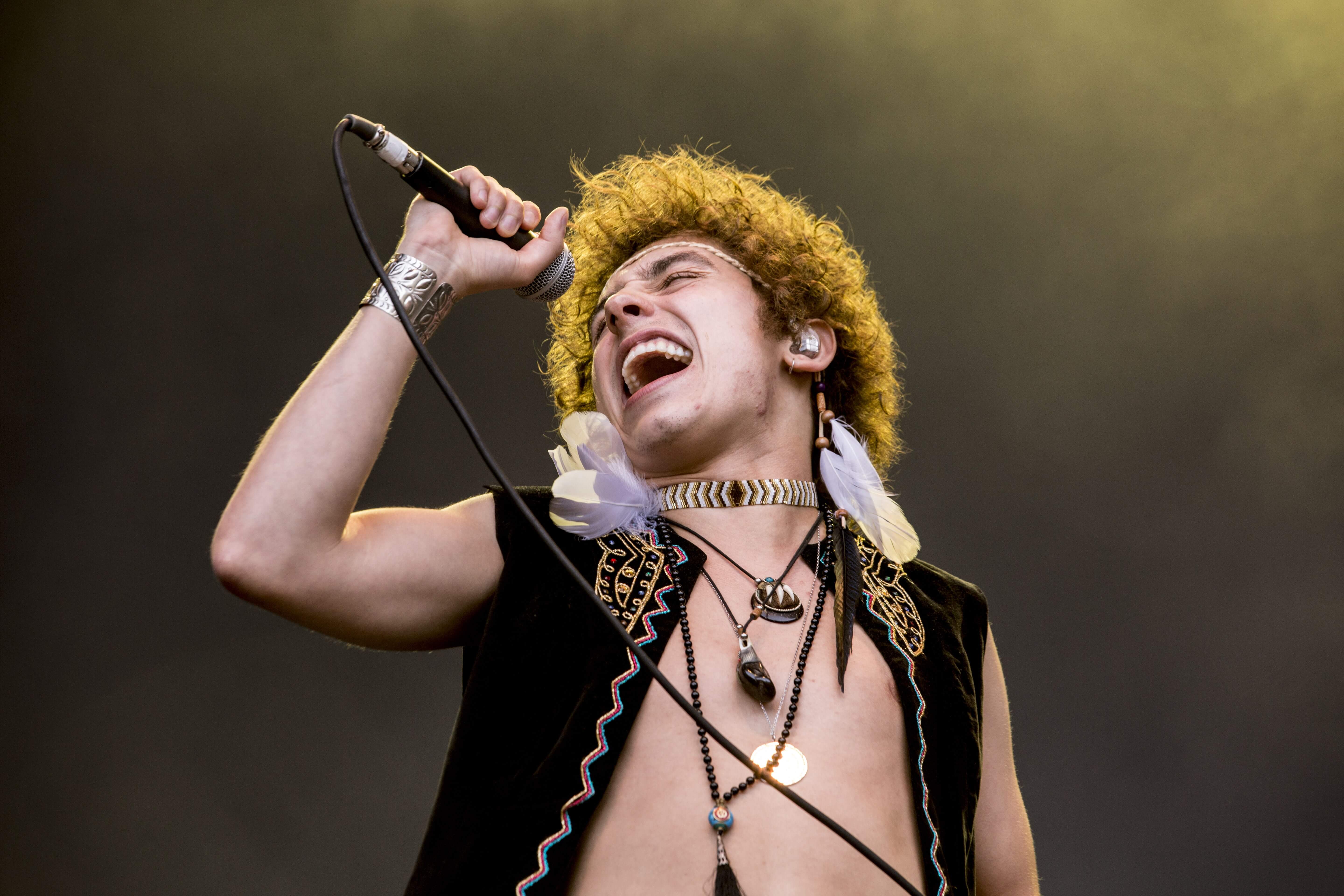 Okay, this is cheating. Greta Van Fleet isn’t really a cover band, but they sound so much like Led Zeppelin that they might as well be. The Michigan band borrow heavily from the hard rock legends — albeit with a little dash of AC/DC thrown in for good measure. For their Friday set on the American Eagle stage, the band was in full ’70s rock regalia: leather pants, multiple necklaces, a vest with no shirt — and that was just the lead singer. The group rolled through a number of tunes from their pair of 2017 EPs with a healthy dose of soloing thrown in to round out the set.

The crowd also had a vintage feel to it. Hard rockers both young and old wandered the grounds sporting vintage rock t-shirts, ripped jeans, and enough silver jewelry to make Guy Fieri smile. I even ran into a few groupies that were old enough to have slept with Jimmy Page. For a festival that seemed to be falling further away from rock music, Greta Van Fleet was a reminder of how much fun the genre that started the music festival can be.

Parquet Courts had no business being the first act to grace the Bud Light stage on Friday afternoon. Not that they weren’t good — they were actually fantastic — it’s just that no one had any idea of who they were.

“I’ve longed for that day when I’d be playing for confused, slightly disgruntled Post Malone fans,” said guitarist Andrew Savage. “And that day has finally come.”

Despite a small turnout and the aforementioned Post Maloners, the group delivered the goods. The Brooklyn band played cuts spanning their six-album discography including standouts like the freewheeling one-two punch of “Master My Craft” and “Borrowed Time” from their debut masterpiece Light Up Gold and “Wide Awake,” the angular title track of their 2018 record that sounds like a block party complete with cowbells and whistling. The band capped off their set with a 10-minute jam and the two-minute punk burner “Light Up Gold” before telling the audience that they could Google them. Hopefully, a few actually will.

A lot of eyebrows were raised when Vampire Weekend and The Weeknd were pitted against each other on Saturday night. The Columbia grads have not released an album in over five years and are not exactly known for having a stadium-sized sound either. There has been even more uncertainty around the band since the departure of multi-instrumentalist Rostam Batmanglij. To compensate, the band brought in four additional musicians to help round out their simplistic afro-pop. It worked. Tracks like “Cousins” and “Wolcott” sounded bombastic with the addition of the new members. However, the sparse playfulness on classics like “Cape Cod Kwassa Kwassa” and “Oxford Comma” remained intact.

There was also a DGAF attitude that ran through the show which is a very strange thing to be typing about a Vampire Weekend concert. When they weren’t rolling through the hits, the band took time to show off their skills by pausing for extended jams throughout the set. They played “A-Punk” three times to “warm up,” according to frontman Ezra Koenig. The threw in a Chicago cover. Koenig even announced that the band had recently completed their new album and were in the process of mastering the record. It was a great reminder of what made the group so exciting at the start of the decade and what there might be to look forward to at the end of it.

It pains me to say this since I’m such a big fan, but it has to be the Arctic Monkeys. The Sheffield boys’ set was heavy on the ’60s-inspired lounge music off their new album, Tranquility Base Hotel and Casino, and the combination of a curtain and a giant neon “MONKEYS” sign was reminiscent of the setup for the variety shows from the same era.

Every member of the band dressed accordingly: suits, billowy trousers, bowling shirts. Frontman Alex Turner had something approaching a leisure suit complete with an ascot and a freshly shaven head.

Despite exuding confidence and British cool, the band could not make up for the fact that their new record just is not that fun to hear live. As arguably their weakest album to date, the crowd was less than thrilled with the litany of new songs.

When the band did break into the punkier cuts from their debut or the hits from their commercial smash AM, everyone went absolutely apeshit. People were singing along to the guitar parts and thrusting their hands towards the sky. Those moments were few and far between though and it felt like a missed opportunity for a band that was on the cusp of taking over on American soil.

Bruno Mars is our generation’s best pop performer and his Friday night headlining set left no doubt. Mars has always made his best music when he repurposes the sounds of past icons. There is a James Brown swagger and shuffle to “Uptown Funk” and “Perm.”  Pop gem “Treasure” could easily slide onto either side of Michael Jackson’s Off The Wall and both “Versace on the Floor” and “Finesse” are pure throwbacks to ’90s R&B. Mars is aware of all of this and made sure to play up those elements in both the lights and graphics that appeared on stage. He even threw in a couple guitar solos with purple neon that felt reminiscent of a certain ’80s pop legend raised near the waters of Lake Minnetonka.

Equally as good as Mars was his band. With the exception of the drummer, all of the members paraded around the stage doing the same slides and two steps Mars himself was doing while never slipping up on a single note. They were also allotted time to flash their own individual talents by soloing between songs.

Unfortunately, due to time constraints, Mars was not able to play the set of covers that includes hits from the artist’s aforementioned list of idols. While it would have been nice to see, Mars did an incredible job of distinguishing himself as someone that can comfortably slide into that list of greats

After three days and countless highlights, the festival’s fourth and final day felt a little flat. There were highlights: Jack White delivered a tremendous headlining set that was even better than his show in Omaha earlier this year and The Vaccines played a fun, singles-heavy set. Other than those acts though, there was not a whole lot that was memorable. Lil Pump’s set was marred by technical difficulties, Odesza didn’t offer anything outside of what Perry’s was offering all weekend long, and acts like Lykke Li and Manchester Orchestra are just not ideal for the festival setting. I’m sure there were plenty of fans out there that would disagree and plenty more that were too drunk or high to care who was playing, but the festival’s final day left me tired and a little less than satisfied.

This honor goes to the late afternoon/early evening rap crowds. It didn’t matter if it was Logic, Post Malone, G Herbo or Tyler, the Creator, people were losing their goddamn mind. Mosh pits were forming left and right, everybody knew the lyrics to every song, and overeager teens were scaling everything from trees to camera towers.

These shows also had some of the finest fan interactions. G Herbo was nice enough to let a wheelchair-bound crowd surfer on stage with him. Logic showed his appreciation for a young fan named Matthew who had been camping out since 6 a.m. to see him by getting the crowd to chant his name. Tyler, by contrast, told a fan that was bold enough to throw his shoe on stage that he was dumb. “Now you gonna be that dumb motherfucker walking around at the festival with one shoe,” he said. “If any of y’all see this nigga, make sure to make fun of him.” Glorious.

As I stated from my review earlier this year, St. Vincent has one of the best live shows around. The guitar goddess brought a scaled-back version of her Masseduction tour to the Bud Light stage at the festival’s north end. Annie Clark brought all the same weirdness that she did to the Holland performance earlier this year. Dressed in her trademark pink spandex bodysuit, Clark shredded her way through the hour-long set. Her band members wore tan masks that hid their features and screen behind Clark flashed pop art inspired graphics similar to the ones she had shown in Omaha. All of this would come off as trite if Clark could not play, but she can. Really well in fact. During the set I befriended an older man from Birmingham, Alabama that put it best. “A lot of these acts say ‘fuck’ to get the crowd fired up, but she can actually fucking play.”

NME favorite Franza Ferdinand, Catfish and the Bottlemen, and Børns all had stellar sets throughout the course of the weekend. Franz Ferdinand’s set was heavy on material from their masterful debut album — yes, that’s the one with “Take Me Out” — and the crowd almost seemed surprised by how many hits the band actually had.

Børns brought his brand of cabaret indie pop to a ravenous crowd at the Lakeshore stage. Garrett Clark Borns came out dressed in a Texas tuxedo but eventually stripped down to just his bell-bottom jeans, slinking and thrusting his way through his seductive songs in between. He also jumped off the stage to lead a singalong and make some fans in the front row very happy.

Catfish and the Bottlemen, by contrast, just rock. The lads from North Wales absolutely hammered their way through their 50-minute. It was just simple, effective, slightly distorted rock n’ roll and it was an absolute blast.