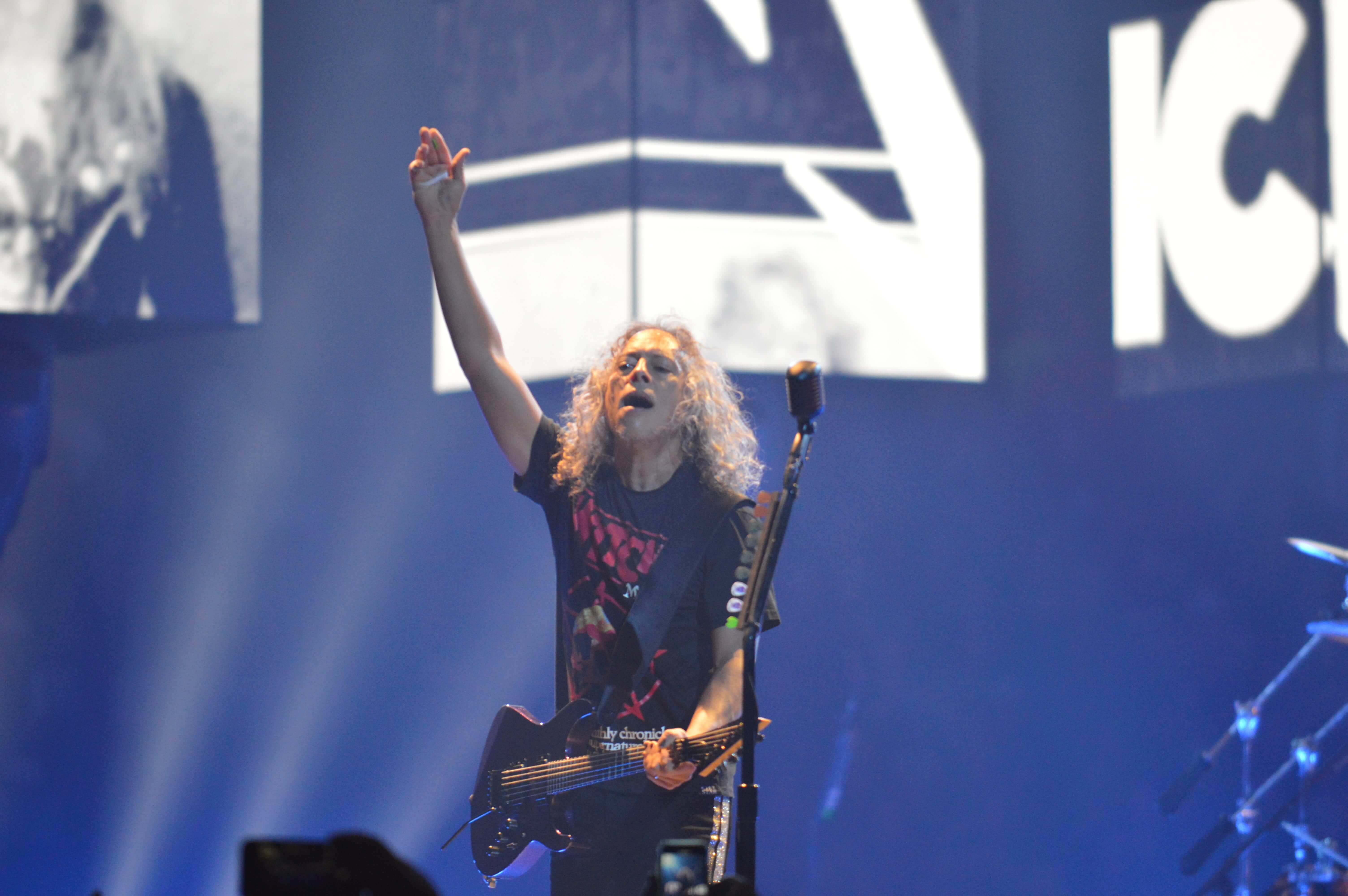 “Welcome to the family,” roared singer James Hetfield midway through Metallica’s Thursday night show at Pinnacle Bank Arena. The Bay Area legends came through Lincoln to remind the Heartland who the kings of thrash metal are, in case there was any doubt.

There was no opener for the show and the near-sell-out crowd was obviously antsy before the band took the stage at around 8:30.

When they made their way onto the stage accompanied by Ennio Morricone’s “Ecstacy of Gold” from the score to The Good, the Bad, and the Ugly the crowd absolutely lost it. Metalheads are passionate people and you could tell there definitely weren’t any casual fans in the audience.

Metallica definitely delivered the goods. The show was part of the band’s Worldwired tour, inspired by the band’s surprisingly successful tenth album Hardwired… to Self-Destruct, and the set was heavy on new material.  The record is solid –arguably their best since their 1991 self-titled effort — and fans seemed really responsive to the new material, even singing along the album’s lesser singles.

While I’m sure the band appreciated that, they definitely knew they had boxes to check before shipping off to the next city. “Seek and Destroy” from the band’s first record was the first truly soaring sing-along of the evening. They also played a searing version of “Hit the Lights” and bassist Robert Trujillo paid tribute to original bassist Cliff Burton with a spot-on rendition of “(Anesthesia) Pulling Teeth.” They also stomped through Ride the Lightning classics “Fade to Black” and “For Whom the Bell Tolls.”

While the band sounded great, the production took the show to a different level. The stage was placed in the center of the arena’s main floor with a number of video cubes floating overhead. There were no set seats on the floor either, after all, this is a Metallica show and people are expected to mosh, even if they are starting to grey.

Throughout the show, the cubes flashed everything from fan art, to footage of black-and-white war films, to neon signs advertising ladies of the night. On the ground, flames erupted around drummer Lars Ulrich’s drum kit during “Fuel” and drones that were reminiscent of giant lighting bugs flew in intricate patterns just above the band as they played “Moth Into Flame.”

The band just seemed happy to be playing as well. You would think that would be a given for a band with six number one albums, more than 100 million records sold, and one of the most successful stadium tours in recent memory. However, the band has had its share of struggles over the years — the loss of members, alcohol abuse, and historic levels of infighting.

You would never know it watching the group on Thursday. There was a dorky playfulness that was present throughout the entire set. Trujillo and lead guitarist Kirk Hammett would chase each other around the stage like a couple of fourth-graders playing grab ass at recess (they even played a Chic cover between songs), drummer Ulrich did one fan a courtesy by spitting water on his towel at their request, and Hetfield spouted multiple times how thankful he was for everyone turning up.

There was plenty of fan service throughout the show as well. Hetfield did a shout out to an eight-year-old fan named Lily standing in the first row, the Nebraska state flag flashed on the video cubes with the group’s logo scrawled across it, and Hetfield showcased his pick which featured the Hardwired cover on one side and “LINCOLN” on the other.

For the final part of the main setlist and the encore, Metallica brought out all the big guns: “One,” “Master of Puppets,” “Nothing Else Matters,” and “Enter Sandman.” Even though the members are all in or approaching their mid-50s, and celebrating 37 years of existence, they can still fucking shred.

“You make us feel good and we’re here to make you feel good,” said Hetfield midway through the performance. And while it’s easy to be cynical about Hetfield pandering to the crowd and trying to make people feel like they need to snag a $60 t-shirt on the way out — Metallica is a brand at this point — it’s much harder to do so when you’re thrashing so hard you’re worried about giving yourself whiplash. Metallica may be part of the machine at this point, but they are still pretty damn fun to rage to.