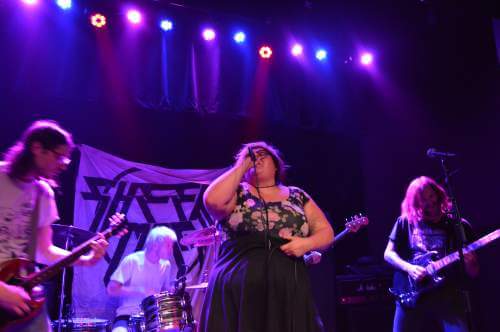 The Reverb Lounge was packed Tuesday night for Philadelphia rock band Sheer Mag. In fact, it may have been the most packed I’ve ever seen the Benson club, and with good reason, Sheer Mag has been one of the most ass-kicking guitar bands to appear in the last three years.

Before the Philly band took the stage, local group BIB and Indiana based Laffing Gas opened the show with a one-two punch of punk energy. Both bands had pummeling riffs, hard drums, and genuinely engaging front men. They provided an excellent shot of adrenaline to start the night.

As much as I enjoyed the first two groups, Sheer Mag were billed as the headliner and they certainly took the show to another level.

Their setlist was comprised of a mix of cuts from the band’s new record, Need to Feel Your Love, with a number of classics from their first three EPs. New songs, including the politically charged “Meet Me in the Street” and “Expect the Bayonet,” mixed in seamlessly with the likes of “Button Up” and “Fan the Flames.”

Despite a broken bass string and a slight pause in the show, the band provided a thunderous rendition of “Turn It Up,” complete a three-guitar chugging riff, dueling guitar solo, and the musicians shouting the title in between verses from lead singer Tina Halladay.

They could have played these songs half-heartedly and I still probably would have enjoyed it. Luckily, the interplay between all the band’s members was impeccable.

Halladay’s howl is even more impressive in person. Laffing Gas’ guitarist joined Sheer Mag’s Matt Palmer on Kyle Seely to kick up the band’s already punchy guitar sound, and the rhythm section of Cameron Wisch on drums and Hart Seely on bass played with driving ferocity throughout the show.

After a rousing cheer from the crowd, the band returned for a two-song encore. They started with the hard-hitting swagger of “What You Want,” the very first song from their first EP. The group followed with “Need to Feel Your Love,” the title track off the new record. Back-to-back, the songs did well to highlight the group’s evolution. The former a grimy, riff-driven rock n’ roll throwback and the latter a disco-infused stomper.

As the disco ball turned and the crowd swayed to the final song I couldn’t help but think this was the best show I’ve seen so far this year. I said in my preview that if the band was anything less than thrilling I’d be surprised. Sheer Mag was all of that and more, and I can’t wait until I get to see them again.