Home » Music » Review: The Weeknd Is Out of This World at Pinnacle 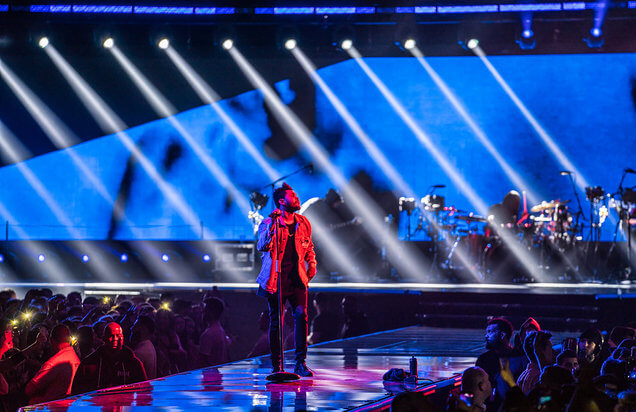 It has been a whirlwind year for Abel Tesfaye, the Toronto native better known as the Weeknd. After releasing a number one single, number one album, and a successful first leg of his Starboy: Legend of the Fall tour, the artist was primed to give Lincoln the best possible show on Wednesday at Pinnacle Bank in Lincoln, and he did not disappoint.

NAV, another Toronto native and up-and-coming Soundcloud artist, kicked off the show with a quick opening set that included the self-produced “Myself” and “Perfect Timing (Intro),” his collaboration with Metro Boomin.

Atlanta rapper Gucci Mane has been on an absolute tear since being released from prison in May of last year, and the artist was in good form for the show. He broke out his verses from both Rae Sremmurd’s “Black Beatles” and Migos’ “Slippery” as well a litany of tracks from his recently-released mixtapes. However, radio-friendly singles “Wasted” and “Lemonade” appeared to be the crowd favorites of the evening.

Before the Weeknd came on, the crowd were given a chance to marvel at the stage setup. The stage itself was a long catwalk that jutted out into the back of the floor section of the arena. Overhead was giant, shape-shifting Star Destroyer ripped straight out of a galaxy far, far away. All of it was bathed in smoke and strobe lights as a lurching bass signaled the start of Tesfaye’s set.

Tesfaye ascended from the middle of the stage and ran through a number of songs from his most recent album, and the tour’s namesake, Starboy.

The simple mechanic tick of “Starboy” gave way to the sinister synths of “Party Monster,”  “Six Feet Under” and “Low Life,” both trap-infused Future collaborations, banged hard, and there was even a mash-up of “Tell Your Friends” and “Die For You.”

While Tesfaye is aware that the majority of fans were there to hear the newer hits, he took time out mid-set to perform “The Morning” and “Wicked Games,” two of the slower cuts from his first mixtape House of Balloons.

To end the main set, Tesfaye brought out all the hits. His croon on “Earned It” was greeted with appreciative cheers from the female fan base, “In The Night” saw the artist gliding across the stage, and the slick, electro-pop of “Secrets” gave way to a bass-heavy rendition of “I Can’t Feel My Face.”

The applause he received for each was more rapturous than the last. I can honestly say it was the loudest crowd I have ever heard in my life, a fact that did not seem to be lost on the artist.

After ending the show with a throbbing, bass-heavy version of “The Hills,” Tesfaye bowed down to the crowd and then to his three-piece band. It was a lovely gesture and an acknowledgment that the Starboy status is only possible with the love of the fans and the help of those around him.