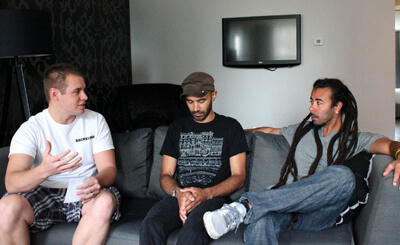 Like every year, the Omaha area is always in anticipation about who the bands will be performing at River Riot. When 89.7 The River announced this year’s lineup, it proved it was going to be another great show. This year there were five bands playing on Friday, May 11th with After the Fall opening followed by Emphatic, Five Finger Death Punch, Shinedown, and headlining the event was Incubus.

Backstage Entertainment got to interview Incubus and Shinedown that night as well as bring you some behind the scenes footage. The day for Backstage Entertainment had a slight change starting early that afternoon but turned out to be for the better. We got a call from Incubus’ management saying the band wouldn’t be onsite until after our scheduled interview but wanted to know if we could do it earlier at the hotel they were staying at on our way to the show. We jumped at that opportunity because it would be neat to have a different setting.

We got to downtown Omaha and called the Incubus tour manager and from there we talked to the hotel staff and they gave us our own hotel room just for the interview. After waiting a little bit, Chris and Ben from Incubus came up to the room for our interview. We talked to them about what it was like having so many hit songs, their upcoming tour with Linkin Park, and they drew questions from the “BSE Box.”

Later that day, we arrived to the new venue for River Riot, the Mid America Motorplex in Pacific Junction, IA, and had our interview with Barry Kerch, drummer for Shinedown. Barry was a really nice guy and he made time for us before their set and before the band’s workout. Barry told us the whole band gets together to try and workout before their set just to stay in shape on the road and stay healthy. We also talked to Barry about their new album, Amaryllis, and the direction they went from The Sound of Madness album.

Overall it was a fantastic night, the new venue seemed to work great for the show, and besides the windy weather everyone had a great time. Below are links to our interviews, backstage footage, and photos from the night.

Before the Incubus Interview: http://www.youtube.com/watch?v=AbMUBtELtMo