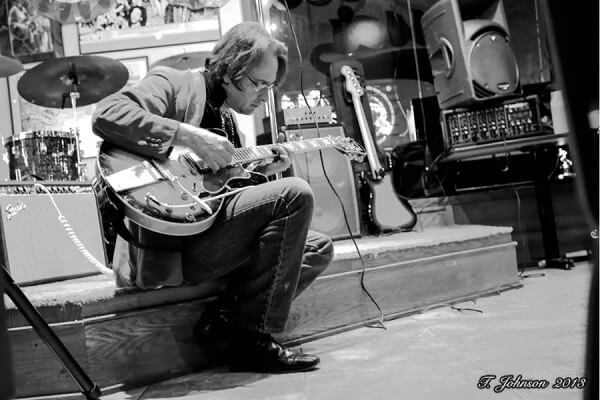 Chicago’s Rockin’ Johnny Burgin is back in the metro with a show Thursday, March 26, 6-9 p.m. at The 21st Saloon. Burgin is an accomplished guitarist with great chops in traditional Chicago blues plus some sweet jump and swing style. Burgin learned from some of the greats of the blues when he first hit the scene in Chicago. Producer Dick Shurman, writing in Living Blues magazine, says, “Johnny has always been known as a crowd pleaser with rawness, drive and a tight band that’s a guaranteed winner for all who see or book the band.” March 10 Burgin releases his new CD Greetings from Greaseland, recorded at Greaseland studios in San Jose, CA. The disc features some heavy hitting sidemen including Kid Anderson, June Core, Aki Kumar and Vance Ehlers. See rockinjohnnyband.com.

Des Moines, Iowa’s, fine jump, swing and Chicago blues band The Soul Searchers are at The Reverb Lounge in Benson Friday, Feb. 27, 9 p.m. These guys are great musicians and play an excellent mix of original music and traditional blues from T-Bone Walker to Muddy Waters and Little Walter. They have both spark and sparkle. The band has won the Iowa Blues Challenge, plays regionally including appearing at the Mississippi Valley Blues Festival and they have been featured on Iowa Public Television. Alligator Records’ president Bruce Iglauer says of the band that they are “playing blues with a real sense of the tradition.” See thesoulsearchersband.com.

Veteran musician Steve Johnsen of The Johnsen Brothers passed away Feb. 19 at the age of 64. Johnsen was much beloved and respected in the local music community. The Johnsen Brothers were longtime favorites and mainstays of the Omaha-Council Bluffs blues scene. As the bass player, Steve helped lay down the great grooves that brother Neil’s guitar soared over. The Blues Society of Omaha hosts a benefit and gathering in honor of Johnsen on Sunday, March 22, at The 21st Saloon, beginning at 3 p.m. BSO President Mark Grubbs says “This will be an afternoon of great music by a large number of Steve’s friends and band mates from years past. Steve’s wife, Nancy, has requested that proceeds from the event go to the hos- pice that made the final weeks comfortable for Steve and family.”

The Omaha Lounge, in the beautifully restored space occupied for years by Buck’s Shoes at 1505 Farnam St., has been booking a variety of local jazz and blues artists for early shows most nights 7:30-10:30 p.m. Hector Anchondo has been playing solo acoustic Thursdays. This weekend, Carol Rodgers performs at The Omaha Lounge Friday, Feb. 27. Also known as “Mama O,” Rodgers is a 30-year veteran of the music business who has recorded and toured with Sergio Mendes. Rodgers is a popular local entertainer who has also been featured on nationl film and television soundtracks. Saturday, Feb. 28, saxophonist Ed Archibald plays with pianist Jeff Scott. Keep up with their schedule at facebook.com/theomahalounge.

Aly Peeler’s popular open mic is happening at The Hive on Wednesdays, with a who’s who of local artists performing in a variety of styles. Music starts about 9 p.m.

Samantha Fish plays The 21st the following Thursday, March 12, her up and coming sister Amanda Fish and her band open the show at 5:30 p.m.