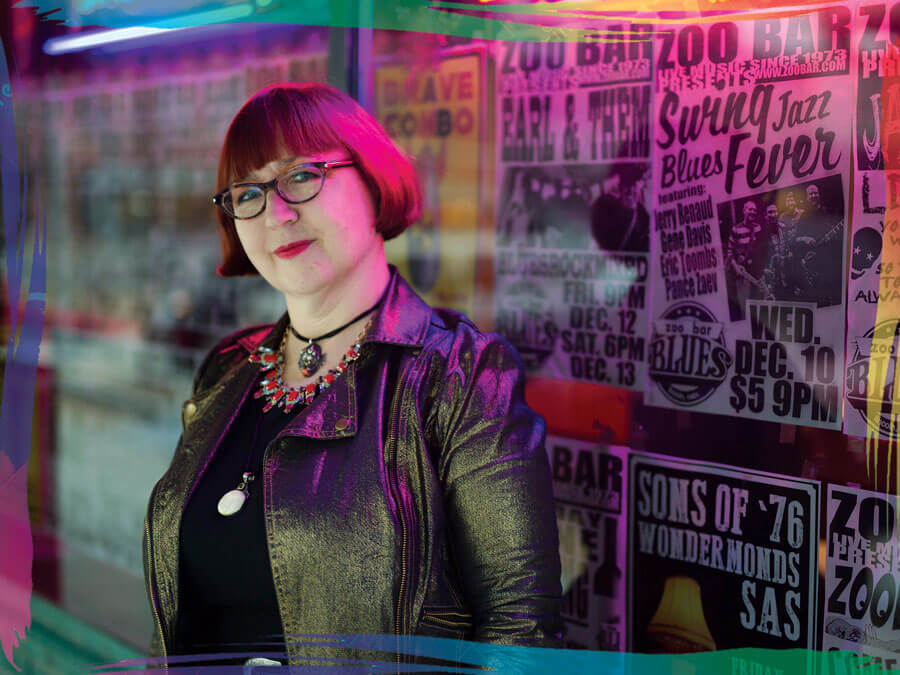 Anyone in the Omaha/Lincoln music scene who has had the good fortune of befriending B.J. Huchtemann knows just how dedicated she is to Roots music. You can see it at every show she attends. From her own big band roots to a college epiphany and her immersion in roots music, Huchtemann’s lifetime of work is about to receive one of the highest honors in music journalism.

On Friday, Jan. 23, Huchtemann will receive the Keeping the Blues Alive Award for Journalism, given out annually by the Blues Foundation in Memphis. Huchtemann is the fourth Nebraskan to win a Keeping The Blues Award along with Larry Boehmer, Terry O’Halloran and Rick Galusha and honored to be a woman winning the Award in more male-dominated industry.

Each year, the awards are given to individuals and organizations that have made significant contributions to the Blues world. In Huchtemann’s case, it is her deeply sincere passion for music that has fueled her work over the last 25 years.

That passion began early when as a child she would watch her mother, Peggy, dressing to the nines in preparation of going to see Big Band concerts at the Elms Ballroom in Schuyler. It is told that her father, not particularly into music, would often have BJ or her brother dance with Peggy while listening to Benny Goodman, Glenn Miller and other Big Band favorites. Huchtemann also remembers spending a lot of time in her youth with a transistor radio that would fill the air with a variety of genres including Soul, Blues, Pop and Rock from Ray Charles to The Monkees.

But it wasn’t until the early ’80s in college where Huchtemann fell in love with the world of Roots music. Attending University of Nebraska-Lincoln, she took a lecture class called “Arts Today” with Professor Larry Lusk. Lusk brought the infamous Jay McShann in from Kansas City to perform and she was taken aback. Huchtemann quickly became a regular at the ZOO Bar, where owner Larry Boehmer often hosted McShann as a performer. She defined the performances of McShann and newly re-discovered singer, Alberta Hunter, as “magical.”

“You know, there are certain artists that just have, I guess, such a passion for the music, or a connection with the music, that it’s not just a performance, it’s an experience,” she said. “And if you’re really lucky, you experience this kinetic thing that can only happen with live music; where there’s an energy sharing, and the more the audience responds, the more the artist responds, and it can really be magical. I feel sorry for people that don’t give live music a chance, because to me it is one of the most important things. It’s like religion to me.”

Seeking the “magic” in music has inspired Huchtemann to see thousands of shows and form deep, lasting bonds with musicians and industry professionals that span from the local scene to iconic international status. Here are what some of those folks have to say about her:

“It’s rare, I think, to find people who pay attention to the details and get it all so right.  I’m sure the Nebraska music scene, roots music in particular, benefits greatly from her passion and professionalism in print.” — Tommy Castro (Blues Music Award Winner)

She has a keen awareness of soulful music regardless of the genre, and can always discern the more artistic bands from the mundane.” — Larry Boehmer (founder of ZOO Bar)

“For as long as I have known her, B.J. Huchtemann has been a perceptive, compassionate and non-stop promoter of blues music and the musicians that perform it. She’s helped me, and so many other musicians, through some damn rough times as well as shared the good times and has given wise career counseling to more musicians than I count. If every city had someone like her, the world of music would be a better place.” — Dave Alvin (Grammy-Award Winner)

“As a local musician, I can’t think of anyone who, on a daily basis, passionately promotes and shares with the public the upcoming events and artists in our area. BJ is a tremendous asset to our community and local music scene and we are lucky to have her in Omaha.” — Matt Cox (Local Musician)

“It’s one thing to just write about music, it’s a whole another thing to show up and become a part of it like she does. She doesn’t just write about the music, she lives it and is passionate about it. That’s the way it should be.” — Kris Lager (Local Musician)

“B.J. has good taste and she knows music and I find that rare. I talk to a lot of music critics who have no idea about the history and the roots of it. And she actually goes out to learn more and that is extremely impressive. I talk to a lot of people that don’t get what I’m saying, that misquote me left and right. It’s refreshing to find someone who really cares about writing about music.” — Curtis Salgado (Blues Music Award Winner)

In the early ’90s, Huchtemann saw dwindling crowds for some of her favorite Roots artists, namely a show at the Howard Street Tavern where 40 people showed up to see Luther Allison. She realized the mainstream press was not going to cover Roots music so she held off on CD reviews she was writing for the regional music monthly “The Note” in order for them to coincide with local performances. At that time, editor John Heaston reached out to her about doing Blues coverage for The Reader. Looking back, she realizes that in the days before the internet, people used to talk more about music; they hung out at record stores and talked about what shows they were excited to see. Essentially, her Hoodoo column, and the freedom afforded to her by The Reader editors, harkened back to those days of lively conversations on what great music was coming through town.

Huchtemann doesn’t claim to be, see herself as, or market herself as an “authority” on music. She sees herself as a knowledgeable fan that is blessed with a platform to reach people in the community. She defines the foundation of her job as trying to connect the artist with audiences that will respect, appreciate and hopefully be moved by their work. At The Reader, she is thankful for the freedom to write about the music she loves most, but has been asked why she seems to lack a critical voice. Her response is that she’d rather talk about the artists creating music that is significant, rather than bash the artists that aren’t quite there yet.

If any of you have seen B.J. at a show, you know exactly where her heart is. You can see the happiness she exudes while listening to great music. She is in it. She is with you. It is magic. Talking about seeing older performers such as Jay McShann, she says “after a song or two, if you really look, if you really watch, you can see the days and the years roll off. And you can see the joy that they get out of the music. And you can see the person that started making music and it is pretty amazing. Music IS medicine.” Memorable performances by her favorite artists including Jon Dee Graham and Dave Alvin, seeing Curtis Salgado at Playing With Fire after his liver transplant, seeing Odetta in the misty rain at the Chicago Blues Festival, seeing Luther Allison for the first time at a completely packed ZOO Bar, have solidified the idea that music is a very special thing when it works.

As we see crowds and musicians in the Blues world aging, Huchtemann gets frustrated at some younger perspectives that think of Blues in a negative light, as sad or depressing. She notes that new, younger artists such as Shakey Graves and John Fullbright are packing houses and are very rooted in Blues music and she hopes that younger crowds will realize what they are hearing and be willing to dig deeper into Roots culture.

“Blues is not sad music,” she said. “Blues is about celebration. Blues is about community. What we are facing now, is this issue of not enough people coming out to keep places like The ZOO with a secure future.” She is very aware that club owners that succeed realize that you have to build a following and not write off great bands if they don’t pack the place the first time. With that thought, always fighting for the cause, BJ encourages people to just please get out of the house and go see live music. Search for the magic.