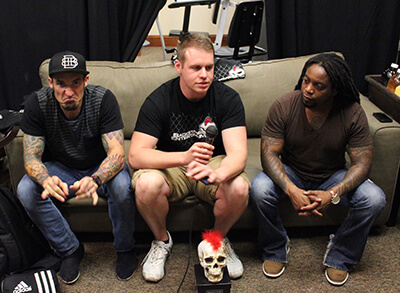 On a very wet Sunday night, Staind and Sevendust performed at Stir Cove in Council Bluffs, IA. Earlier in the day before the down pouring rain, lightning, and thunder. Backstage Entertainment had the opportunity to interview Lajon and Clint from Sevendust. This was Backstage Entertainment’s third interview with the band and each time we see them they always confirm their status as one of the nicest bands in the industry.

The guys’ most recent album, “Time Travelers & Bonfires,” was released in April of this year and have been touring as an acoustic set since the album is acoustic as well. Asking how the tours that are unplugged versus the ones that are plugged in, the acoustic sets bring out more of the sincerity in the song. You can’t cover up mistakes in the song if any are made by being loud, like an electric show.

As the show started, so did the rain. It seems rare that you have an outside show in the down pouring rain and continue with the lightning and thunder but Sunday night June 1st was one of those rare occasions. The rain seemed to have no effect on either of the bands that night and it turned out to be one of the best shows we’ve attended at Stir.

Make sure to check out the links below for our interview with Sevendust and photos from their set!