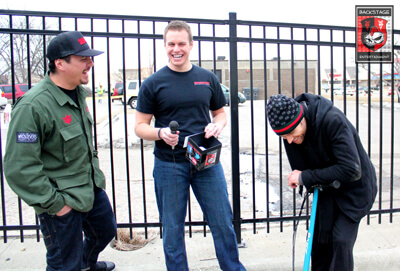 Shinedown, Three Days Grace, and P.O.D. had a couple of shows near the Omaha area within a couple days of each other. On Tuesday, March 26th, the show was in Lincoln, NE, and then on Thursday, March 28th, they were in Sioux City, IA. Backstage Entertainment made the trip to Sioux City to cover the show and interview P.O.D. before the show.

Before the show we caught Sonny Sandoval, lead singer for P.O.D, and we talked about the tour and how it was going. They were on the last few shows of the second leg and got a chance to be with family for the Easter holiday. Sonny said they’ve really been enjoying the tour and have developed some great relationships with members from both Shinedown and Three Days Grace.

After the interview the show started and we got to go backstage to watch P.O.D. take the stage and watched their set side stage. Playing some songs off their most recent album, “Murdered Love,” and the hits that many people know from P.O.D. they opened the show and got the crowd ready for the other two bands. Next, Three Days Grace took the stage and we were excited to see how Matt would do as a the lead singer. Since the tour kicked off there have been mixed reviews about Three Days Grace’s performance. We all know you can’t replace Adam Gontier because he’s an incredible vocalist, but in my opinion, Matt did a great job. He had the crowd with him the whole time and brought the energy like the band is known for.

The show ended with Shinedown performing an awesome set with many of the hits and quite a few songs off their new album, “Amaryllis.” A few years ago Shinedown performed at Sokol Auditorium in Omaha and to see how much they’ve grown as a band is amazing. The guys will only continue to make more great music and keep growing. Overall, the show was phenomenal and would recommend anyone to see any of the three bands if they are in your area.

Make sure to check out the links below for our interview with P.O.D. and photos from the interview and live concert shots on Backstage Entertainment’s page.