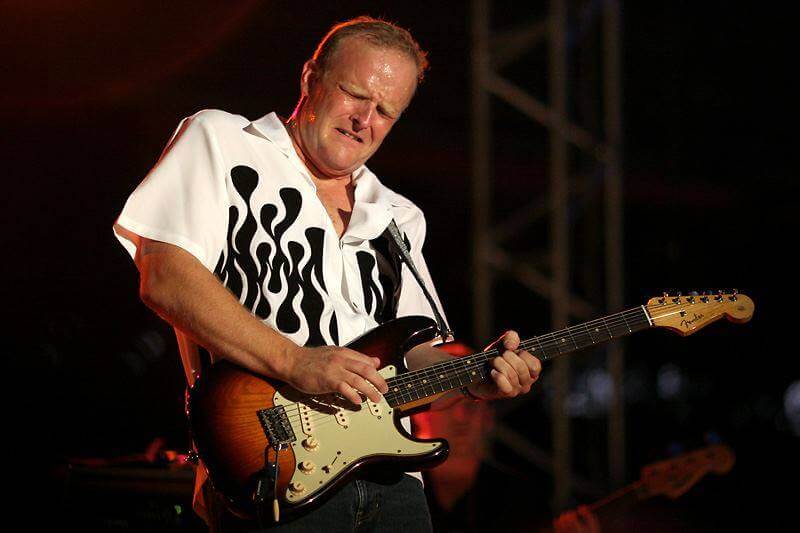 The third of three Playing With Fire free summer concerts takes place Thursday, July 2, at Midtown Crossing, lawn seating opens at 5 and music begins at 5:30 p.m. with BluesEd band Us & Them.

Headlining the show is Albert Cummings. Cummings is a popular blues-rock guitarist who has been seen previously at Playing With Fire and at local venues.

Guitar Edge said of the Cummings, “The blues is best served up live, with an enthusiastic audience and a killin’ band, and that’s exactly what guitarist Albert Cummings does, driving his audience to frenzy in all the right places.”

Cummings is touring in support of his brand new record on just out June 30 on Blind Pig. Someone Like You was produced by Grammy winner David Z and features Mike Finnegan, Tony Braunagel and Jimmy Vivino. See albertcummings.com.

The Boogie Boys from Poland take the second slot on Thursday night’s Playing With Fire Stage. The band’s traditional style of boogie-blues has gotten them to Memphis for the International Blues Challenge twice. They represented Poland in the first European Blues Challenge in 2011 and finished in the top three. They have been feateatured at the Montreal Jazz Festival and Mont Tremblant Blues Festival. Their press kit promises “the band’s piano dueling and duo-ing talent mixed with energetic and nearly acrobatic stage presence has wowed the crowds.” See boogieboys.pl.

The Blues Society of Omaha’s BluesEd youth band Us & Them is a veteran of the BluesEd program. Performing since 2010, they have been seen on Playing with Fire stages twice and play regularly at BluesEd events and Omaha venues. Us & Them has finished recording a CD that will be available later this year. See bluesed.com.

The Playing With Fire free concert series happens in the green space on the east end of Midtown Crossing (bounded by Farnam, Harney and Turner Park Blvd.). Parking in the garage is free during concerts. The lawn opens for seating at 5 p.m. and music begins at 5:30 p.m. For all the details on the final show of this year’s Thursdays of Playing With Fire shows see playingwithfireomaha.net.

Kelley Hunt plays Lincoln’s Zoo Bar Thursday, July 2, 6-9 p.m. The gutbucket blues of guitarist  Steve Byam’s 40SINNERS project is on tap at Harney Street Tavern July 2, 9 p.m. Benson First Friday heats up Benson Friday, July 3. If you don’t already have tickets to Steve Earle with the equally amazing Mastersons tonight at The Waiting Room, you are out of luck. The show is sold out.

I’ll post a special holiday weekend version of Hoodoo with more live shows of note and more about the Zoo Bar 42nd Anniversary featuring the great soul-blues icon Irma Thomas Friday night. You can also follow me if you are on Facebook at facebook.com/bjhuchtemann to get the latest info.

The indoor sets for the Zoo Bar 42nd Anniversary are as follows:

Check out zoobar.com as well as the July’s monthly Hoodoo (on the street in print now) for the details on the weekend outdoor Zoo Fest July 10 & 11 in front of the club at 14th & P Street in Lincoln.