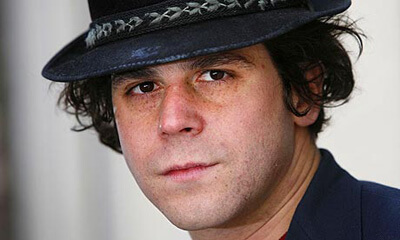 Pennsylvania native Langhorne Slim has seen his career gain headway like a  slow rolling train. Born Sean Scolnick, Slim took his name from his  hometown Langhorne, Penn.,  a nod to his blues influences. His band The Law takes  the stage at the Slowdown this Saturday.

So, who is Langhorne Slim? That question might best be answered from the  title of his current album The Way We Move. The album takes its name from  the constant touring and moving Slim has experienced in the past decade.

When listening to the album, you definitely pick up on a rocking folk sound  with a splash of punk for poetic justice. Slim’s influences are many and  wide ranging. After teaching himself guitar playing along to Nirvana, he  began to explore other avenues of music, especially of the classic  variety. You can hear Bob Dylan’s poetic metaphors echo in his lyrics.  Kurt Cobain’s intensity in his vocals and Tom Petty’s passion when Slim  takes the stage. He’s even a fan of the Wu-Tang Clan.

When speaking to Slim, you definitely sense the vibe of a guy who  truly loves being out on the road performing and loosing himself in the  moment. A guy who’s singular focus in life is making good music about the  events and relations around him.

The Reader: Your sound is all over the place. How would you describe your sound with such an eclectic group of influences?

Slim: I analyze other musicians. I’m clever at all kinds of music and I’ve  always been very analytical of others music if I thought it was good. I  would imagine that that comes out in what I do.

The Reader: How does your songwriting process lend itself to your diverse sound?

Slim: I don’t really know. I don’t really have a songwriting process. I  guess I just try to be aware of it when inspiration comes. I’ll hear a melody  in my head or hear someone say a line at a bar and I’ll think that would  be something good for a song and I’ll try to piece it together. It’s  really not a conscious process. Perhaps something I should really work on.  It just kind of happens and I try to be there for the happening.

The Reader: What is it about music that draws you to it, not only as a musician  but also as a listener?

Slim: It’s a need to listen. A need to experience. A need to dance to it  and move to it and need to create it and perform it. I’m drawn to it like  a lion would be drawn to a … whatever it is a lion is drawn to  (laughing). It’s my life force, it’s what I need to breathe and to live. Without it I would probably suffocate or explode.

The Reader: Typically, where do you draw your inspiration from?

Slim: My life. Music, for whatever reason, just goes along with my life.  If I’m feeling stressed out, joyful or depressed, I’ll hear little  melodies that go along with those emotions. I try to add stories to those  melodies and honor those emotions truthfully. If I’m lucky, there’s a  song.

The Reader: Part of your moniker, you took from your hometown Langhorne. Was the  Slim part a nod to the old blues masters?

Slim: That’s exactly what it was. I was 18 years old and my high school  sweetheart’s father turned me onto a lot of old blues. At the time, I was  listening to a lot of punk rock, rock’n’roll and stuff that I loved and  will always love. But, I really got into that stuff (blues). It’s a nod to  those old blues guys that were so inspiring to me.

The Reader: Your career really seems to be this steady moving train that keeps  going. What are your goals moving forward?

Slim: The goal is always to keep moving forward. It really has been a  steady train of progress. A very slow and steady train. Which is fine.  This train just needs to keep on rolling and I just need to make sure that  it’s well fueled. Keep writing songs. Keep writing records. Keep doing  shows and hopefully just enjoy it more and more.

The Reader: How long have you been playing with your current lineup?

The Reader: I read a quote from DeLorenzo where he said it sometimes feels like  you two have been in 15 bands together. How does that chemistry work for you guys when you perform and write.

Slim: Progress really. We had chemistry in the beginning but, after 10  years of doing this together with no one really knowing who we were in the beginning and no one coming to our shows to a couple of years later with  three people and $3. Now, 17 people know who we are and  we have $20 (laughing). It’s a lot better growing with your  best friends who become your brothers, as opposed to playing with a bunch  of different people every year. I don’t really know though. I’ve never  really done it that way. I’m just really happy that I have the guys I have  and that they work the way they do.

The Reader: When you write a song, how do the rest of the pieces fall into place with the band?

Slim: It’s dependent upon their instruments and how we sound as a group.  I give them a melody and let their talents take over from there. They’re  great at what they do and creative. It’s fun for me to hear how they  interpret a song. Sometimes it comes out how I imagined but, other times,  it comes out in a way that I would have never imagined and it ends up  being much better then it would have ever been. It’s kind of a controlled  chaos.

The Reader: What type of mindset do you take on when you up on stage?

Slim: The whole thing is that the body is not there. There is no mindset.  I rely solely on feeling and inner freakdom. As soon as my mind starts  interrupting, that’s when shit starts to go down hill. I  try to keep my  mind out of the process as much as possible.

The Reader: Who are some of your favorite live performers compared to your  favorite recorded artists?

Slim: I haven’t seen them all live but I’ve seen plenty of performers.  I’d have to say Muhammad Ali, Salvador Dali and Bob Dylan. Oh yeah, and  Otis Redding. Those are some of my favorite guys.

Langhorne Slim plays this Saturday with Jonny Fritz at the Slowdown, 729 N 14th St. $10 in the front room.