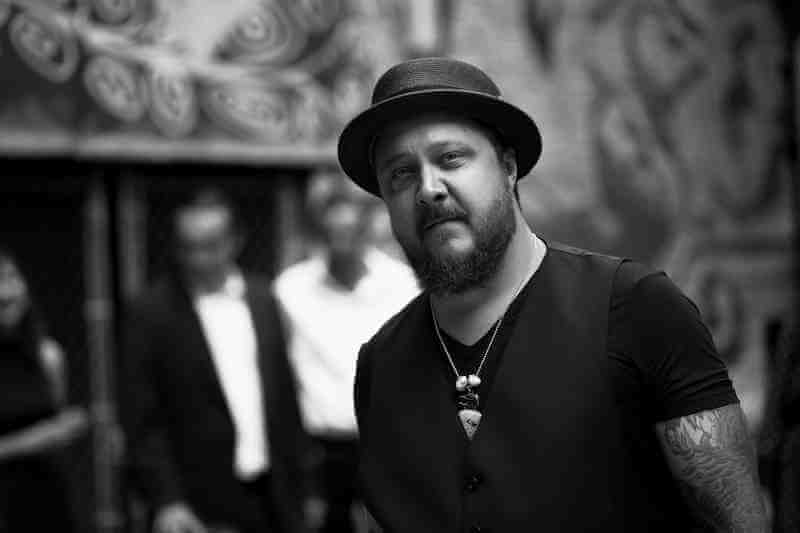 “Music is a healer, and possesses the power to bring real and positive change to the world,” Josh Hoyer said, “I saw Charles Bradley in Wichita in May and he reminded me of that magic, that power. I was in tears.”

Lincoln soul-blues musician Josh Hoyer has stepped up his sound and commitment to the music with every new project. Now he’s relentlessly touring and infusing every show with new focus.

“I told myself a few months back that if I am going to be away from my family for extended periods of time, this music and our show have to be about much more than us doing what we love to do. It has to be about empowering people, about talking about the deep issues we face as a nation and as humans, it has to be part of a movement of changing the world for the better. Once I embodied that viewpoint, that we are serving a greater cause, our shows have been much more powerful and people have really been responding.”

From night clubs to festivals, Hoyer finds audiences are “truly moved by our music and our message. I have been going out into the crowd on our last song as of late to really cement the stage-to-crowd connection. People enjoy being able to shake your hand and look you in the eye. It has been a very moving, a humbling change for me.”

Hoyer is a veteran Lincoln musician who had fronted several high-profile local bands before beginning this project. Josh Hoyer & The Shadowboxers debuted in 2012 and the band has been touring nationally, while releasing two CDs of original music in less than three years. They have been recognized with multiple OEA Awards, including 2014’s best Best R&B/Soul band and Album of the Year. Hoyer also received a national nod with a nomination for best New Artist Debut Album in Blues Blast Magazine’s 2014 awards. In August 2015, the group announced a name change to avoid confusion with several other bands with similar names that they have encountered in other regions. The new band name is Josh Hoyer & Soul Colossal.

“Our next record is a continuation of these growing philosophies and intended to move people in mind, body and spirit. I am just doing my little part in the world. But I intend to do it to the best of my abilities.”

A preview of the recording shows that Hoyer’s energy is well-suited for the live, “one-take” process. The music is the rich, horn-driven soul-R&B that local fans love. Hoyer’s voice delivers his original tunes with the depth, maturity, growl and spark that show the influence of soul greats but that is distinctively his own.That top-flight musicianship and Hoyer’s sweat-drenched, testifying stage presence pull listeners onto the dance floor and into the music.

“You’ve got a guy who been a singer as far back as he can remember that has learned to become more and more honest with himself and his music in me,” Hoyer says. “Along with the [different] ages and backgrounds, each of these players has a different musical background as well. We have two serious jazz cats in the horn section with Marcus Lewis and Mike Dee. We have a rocker and wearer of many hats in Benjie Kushner. We have a drummer that grew up in the church that lays in the gospel and jazz chops in Memphis Shepherd. We have a young prodigy of a bass player in Josh Bargar…We are committed to each other and to the music, and we truly believe that we have something special to offer the world. That kind of strength of character in a group of men is a huge blessing. A Soul Colossal, if you will.”