Home » Music » Stage-screen star in concert with the symphony 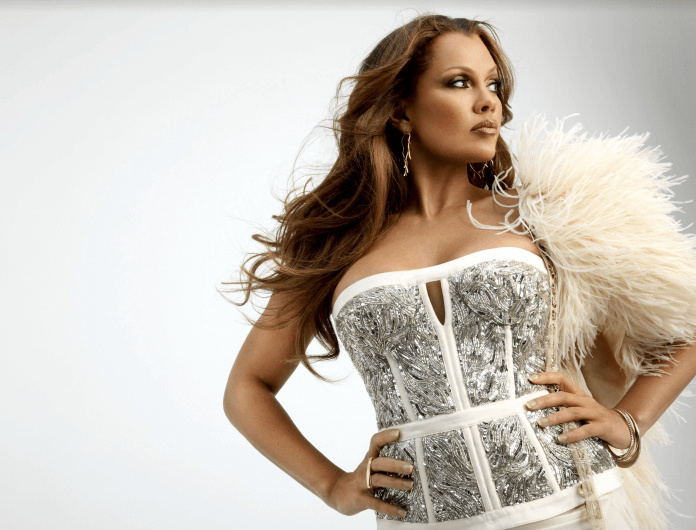 Singer-actress Vanessa Williams, 55, brings a regal serenity wherever she goes.

She looks forward to a backstage visit from an uncle who lives in Omaha.

“I’ve felt the embrace of the African-American community from the get-go – besides incidents where people felt I wasn’t black enough,” she said.

She’s proud of her behind-the-scenes reputation as a steadying influence.

“I’m usually the leader of calm. People say when I’m a part of an ensemble, it’s a calm and happy set. I know how to deal with people. I don’t like drama and I don’t engage.”

Thirty-four years into her career, she shows no signs of slowing. In February, she appeared in the New York City Center Encores production Hey, Look Me Over. She sang a tune idol Lena Horne originated in the show Jamaica.

Here, Williams will interpret standards immortalized by Horne and other icons.

She recently completed a three-week Asian tour. Then she went to Dallas to shoot an ABC episodic dramedy pilot, First Profits, about women cosmetics moguls. If picked-up, it will mark her fourth ABC series, following Ugly Betty, Desperate Housewives and 666 Park Avenue.

“It’s kind of like going back home. The character I play is a force to be reckoned with. I’m excited.”

She loves moving from one genre to another.

“It’s great because it exercises a lot of different muscles for me. It never gets stale and I get a chance to reach different audiences. Playing a small jazz club I can do some intimate, personal stuff. Doing a symphony concert allows beautiful, lush orchestrations I don’t get to hear all the time, so for me it’s a special treat. Then acting behind a camera, I get a chance to step into another character.

“The reason I get to do so many things is that I take care of my voice, I’m professional, I show up on time, I know my material. That’s how you have longevity in this business – being prepared and dependable.”

Performing is play. Preparing to play, especially doing eight shows a week on Broadway, can be a grind.

“The biggest effort is getting to the theater and going through the process of putting on your makeup and costume, especially when you’re exhausted or your voice doesn’t feel right or you’re dealing with distractions. Once you hear the downbeat, then it all goes away. You feel the electricity from the audience, the camaraderie of the cast, and it’s easy.”

The mother of four, who successfully manages her Type 1 diabetes, said she consciously “doesn’t try” striking a positive image but instead projects her authentic self.

“I think it’s a byproduct of who you are. I am who I am and I’m lucky I had great parents who instilled great values in me and I get a chance to demonstrate that. I think it’s also reflected in my children (one of her daughter’s is singer-actress Jillian Hervey).”

“I’m seen as a survivor after being famous overnight at 20 and then having to create a career when, within 11 months, it all changed drastically. It shows fortitude, perseverance, talent. That’s what’s revered. That’ll never go away. That’s a badge of honor I continue to carry.”

“I know these are very positive and strong women helping to bring awareness to the issues,” she said.

She cautions branding all men with a broad-brush.

“I don’t want an attitude where every man is bad, a threat, a predator, untrustworthy. I’ve worked with some incredibly talented, wonderful, warm men – producers, directors, writers, actors – who are my good friends.”

She weathered divorce from NBA player-turned-actor Rick Fox – the father of three of her children.

She married businessman Jim Skrip in 2015.

Williams has come to represent what black women she admires symbolize.

All legendary women stellar in their career and active with civil rights. Their own personal struggles were such lessons for us and our generation. They paved the way.”

“I’m always the one everyone comes to for advice. I love to connect people and make things happen.”

“Progress is definitely apparent in movies and television,

Certainly, there’s plenty of opportunity now, which is fantastic.”

She’s may even direct one day.

Meanwhile, she despairs America’s divide. “The hate speak and the divisiveness,” she said, “is just really saddening”

Escape with her in music on the 21st.