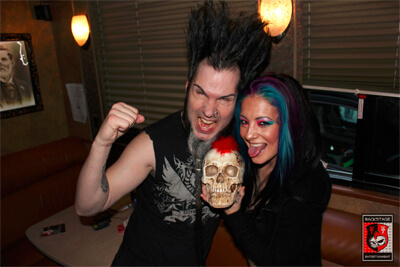 One week after unveiling the new “BSE Box” during our Backstage Entertainment interviews, we got to use it for four interviews during the Noise Revolution Tour. The tour had quite a few bands performing on Sunday, September 23rd and featured the bands Static-X, Emmure, Ill Nino, and 9Electric. We got a chance to talk to all four of those bands during their time in Omaha.

First, we spoke with Cristian Machado, lead singer for Ill Nino. Cristian talked to us about how much down time the guys actually have during the day before they perform. He said touring can be somewhat boring but it helps when all of the bands are good friends and can hang out. He also talked about Ill Nino’s new album coming out in October. The band’s very excited about the release and thinks that it has some of the best songs they’ve done.

Next, Frankie Palmeri, lead singer of Emmure, had time for us to do an interview. Frankie was a pretty straight forward guy and wasn’t afraid to tell the truth. He gave honest answers to our questions, even telling us when he thought questions were stupid. All in all, we had fun in the interview with Frankie and a must see for fans. Thunderwood and Mikey in the band 9Electric, also made some time for an interview. These guys got a kick out of the “BSE Box” and had a great time answering the fans’ questions. They talked about forming the band and how it all came together.

Our last interview of the night was with Wayne Static and Tera Wray Static. Wayne is the lead singer for Static-X and recently came out with a solo album called “Pighammer.” He talked about doing his solo work and Tera also talked about how she was excited for him to do solo work because she knows how talented he really is. Both also shared the story of how they met on one of Wayne’s tour stops and went on to traveling together on the Static-X tours.

The show was great, although being a Sunday night and keeping some fans from attending, it was still great to see Static-X perform again in Omaha. The band that surprised me the most that night was the guys in 9Electric. It was a good time and make sure to check out the links below for our interviews with the bands. Also check out the photos from the interviews and live shots of Static-X performing on Backstage Entertainment’s Facebook page.