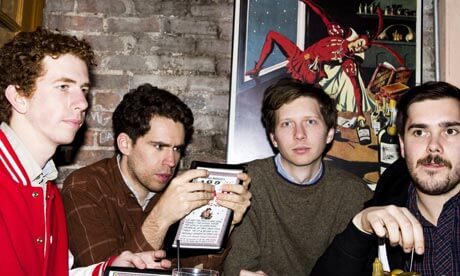 Parquet Courts’ second album Light Up Gold started getting passed around just like many of the other albums Andrew Savage had released prior — by word-of-mouth among fans of underground rock and garage rock music.

The band had self-released the album on their own label, Dull Tools, and were content with how the 2012 LP was getting out there. Savage says his own record collecting and music fandom has developed in a similar way, as he relied on friends’ recommendations and the like to discover new sounds.

“That’s the way to hear about music,” Savage says.

But that wasn’t meant to be the full story for Light Up Gold, because eventually that praise spilled from word-of-mouth to indie music bloggers and from there, Pitchfork Media and other arbiters of mainstream indie music taste took an interest.

“That’s kind of a self-generating kind of thing,” Savage says.

So as the coverage built up around November of last year, it became apparent that Parquet Courts needed to take the next step to promote their music. That meant re-releasing the album on What’s Your Rupture? and playing events like South By Southwest Music Festival.

Working with What’s Your Rupture? was an easy choice, as Savage had known label head Kevin Pedersen for quite awhile. But signing with the label also expanded the band’s reach considerably. The label re-released Light Up Gold earlier this year.

“That was in a lot of ways was people’s first knowledge of Parquet Courts,” Savage says.

Fergus & Geronimo, one of Savage’s other projects, has had similar success and ended up releasing two albums on Hardly Art, a Sub Pop Records subsidiary label. Fergus & Geronimo was more of an occasional project and is currently on hiatus. Parquet Courts is Savage’s full-time band.

“Pretty much all my songwriting is towards Parquet Courts,” Savage says.

It was at the tail end of that first wave of press and praise that Parquet Courts last played in Omaha, during the cold of December at the Sweatshop Gallery, 2727 North 62nd St. Jack Begley of local band Yuppies booked the show and that’s just one sign of the growing ties between Savage and Yuppies.

The two exchanged shows over the years and late last year, Savage agreed to put Yuppies’ next album out on his Dull Tools label. That self-titled record comes out later this summer.

Parquet Courts will return to the Sweatshop Thursday, June 20th with Begley’s other band, The Dad. Savage says Parquet Courts are playing less DIY spaces these days, but they still like being able to take a break from bar and music venue shows.

“Obviously, the rules tend to be kind of lenient,” Savage says. “I still love playing DIY shows because they’re fun.”

Savage has logged plenty of touring experience, having been in several other bands. He started out in the Denton, Tex.-based Teenage Cool Kids, which was the first band of Savage’s to go on tour. In between that band and now, Savage played in Wiccans and recorded two Fergus & Geronimo albums with collaborator Jason Kelly.

Once Savage relocated to New York, he quickly tapped some friends in that area to start the new band.

“Nobody is a hired gun in Parquet Courts. We’re all friends,” Savage says.

The band recorded Light Up Gold on a tape machine in their practice space, recording all but the vocals live. It took three 15-hour days, Savage says.

Once signing to What’s Your Rupture?, the band wasted no time recording a follow-up. They completed that in 10 days at Seaside Lounge Recording Studios in Brooklyn. Jonathan Schenke helmed the all-analog sessions. It’s also where Savage recorded the second Fergus & Geronimo album Funky Was the State of Affairs.

The band premiered three new songs from the album, due out next year, on NPR’s World Cafe program.

“Recording in the studio is just way easier. You just have a lot more at your disposal,” Savage says.