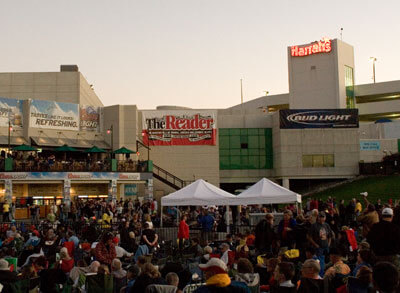 Stir Concert Cove revealed the rest of its initial 2011 summer line-up last night at a party held inside Harrah’s Casino. A July 5 Black Keys show had been announced long ago — in fact, it’s been sold out for quite some time, too — and Mumford & Sons (June 14) were announced as somewhat of a teaser to last night’s event by Harrah’s last week. As for the new announcements from last night, there will be some of the familiar (Big Head Todd & the Monsters on June 10), a little country (Gary Allan on June 25 and Eric Church on Aug. 26), and a little ‘90s old school, too (Goo Goo Dolls on July 15 and Stone Temple Pilots on July 17). Oh, and the Monkees on July 3. Yup, these guys right here. But outside of The Black Keys, the cream of the crop is probably The Flaming Lips show scheduled for Aug. 4. Anybody that was at their 2006 show at Stir — frontman Wayne Coyne likes to do this a lot — knows what I’m talking about. Mumford & Sons tickets go on sale today and all other concerts April 15 at stircove.com. As has been the case in past years, expect a few more artists and bands to be added throughout the spring and summer. We’ll keep you updated on those announcements as they trickle in. 2011 STIR CONCERT COVE SERIES May 26: Hinder with Red, Kopek & Royal Bliss June 10: Big Head Todd & The Monsters and Toots & The Maytals June 14: Mumford & Sons with Nathaniel Rateliff & Fairchildren June 25: Gary Allan July 3: The Monkees July 5: The Black Keys with Cage the Elephant (tickets are sold out) July 8: Ben Folds July 15: Goo Goo Dolls with Michelle Branch & Parachute July 17: Stone Temple Pilots July 21: Melissa Etheridge Aug. 4: The Flaming Lips Aug. 26: Eric Church