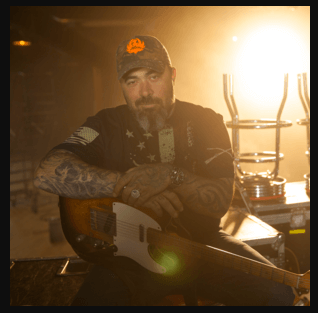 “Sorry, I’m just walking into Waffle House,” says Aaron Lewis midway through our phone conversation. The singer, rhythm guitarist, and founding member of post-grunge giants Staind is deep in the midst of a press-heavy day that includes two more interviews following ours. He apologizes a second time and tells me he wanted to get to the southern staple before the next reporter shows up. It is an appropriate meeting place for Lewis’ most recent press tour due to the fact that he is talking about his country-rock solo material and not the band that brought him fame and fortune in the early 2000s.

To an outsider, it might look like a strange transition going from post-grunge to honky-tonk, but for Lewis, it’s the most natural progression in the world. Born in Massachusetts and raised in New Hampshire and Vermont, Lewis grew up listening to the legends of the genre: Haggard, Cash, George Jones, and David Allan Coe to name a few. Lewis was raised on this music and it is what he still gravitates towards most. For Lewis, making a solo record was less about progressing musically than it was about returning to his roots.

I start by asking Lewis how the current tour is going and how it stacks up against previous road experiences. “It’s a piece of cake compared to touring with Staind,” he laughs. “I can remember one stretch where we played 18 shows in 16 days.” Touring is now a much more leisurely experience for the 45-year-old father, something he seems to be genuinely grateful for. Lewis says that while he still tours throughout the year, he now gets longer breaks between the shows. “I’ll play tomorrow and Saturday, and then I get to head home for a few days and see the family until next Thursday’s show.” It’s a nice pace, but one you can afford to do when you have already sold close to 15 million records.

On Aug. 31, Lewis will headline Stir Concert Cove in support of his latest album, 2016’s Sinner. Over the past few years, Lewis has played Stir a number of times and I ask him how he feels about the venue. “I like an amphitheater towards the end of the summer when it’s not brutally hot because there’s something to be said for listening to music without a roof over your head,” says Lewis. He goes on to say that he hopes the weather from his last show does not follow him this time around. “I was all ready to play and the sky opened up and chunks of hail just started coming down,” Lewis tells me. “Hopefully the fans won’t go home wet and pelted and pissed off this time.”

Despite the dramatic difference in sound, Lewis says there is still a lot of overlap in the fans that come to see him perform. While he appreciates all the love, the thing he does not want to hear is people requesting Staind songs. “It just gets to the point where I’m hearing those requests for the whole show and I’m just thinking ‘look at the name on your ticket, this is not what you paid,’” says Lewis. “It just ruins the experience for everyone else there.” So, just to be clear, if you’re going to an Aaron Lewis concert you are going to hear Aaron Lewis songs. This should be self-explanatory, but apparently, it’s not.

Overall, Lewis said he’s been more than happy with the turnout and that people seem to appreciate the authenticity of his songs. This is high praise for Lewis who’s recently taken issue with spurious country songwriting industry.

During a September show last year, Lewis told the crowd that artists like Cole Swindell and Dan + Shay are “choking all the life out of country music.” Though not apologetic, Lewis told me that the comments were not a personal attack on any of the artists. He does not have a problem with anybody making country music, but he does have a problem with how they’re making it.

“It’s basically a bunch of writers held up in the same room, bouncing the same ideas off each other, and writing the same song over and over,” said Lewis. You can hear the disdain growing in Lewis’ voice the more he talks about the environment. For Lewis, this gathering of talent does not lead to the exploration and experimentation, but toward a pop-country hegemony. Not only that, but it is helping to create an environment where Sinner is considered too country for country radio. That makes it all the more impressive that it topped the Billboard US Country Albums when it was released in September of last year. Lewis seems to take real pride in the fact that he was able to top these “overproduced” country singers making music he considers to be uncompromising.

In fact, while making Sinner, Lewis got about as far away from overproduction as one can. The album itself was recorded in one 16-hour session and every song was done with the bare minimum of takes, usually just one or two. The fast recording tempo gave the album the raw, emotional feeling that Lewis was looking for, similar to the country giants he idolizes.

While he does not seem to be satisfied with today’s country, I take the opportunity to ask if there is any contemporary music he enjoys. “Trap,” Lewis says. Surprised, I ask Lewis if there were any particular artists he likes. He proceeds to list mumble rap stars Migos, Lil Uzi Vert, and Kodak Black. I ask him if there’s any particular reason for the love. “The production is great,” Lewis says. “I also think it’s kind of interesting when you see your 15-year-old daughter who lives out in the middle of the country rapping every word to every song.”

Before he is swept off to his next interview I ask Lewis about a comment from his Rolling Stone interview last year. In it, Lewis talks about how he is still trying to prove he is “a viable part of the country community and not just a rock guy that’s coming in and dipping [his] toes in the country world.” It is a funny thing to ask a guy whose album features collaborations with Willie Nelson and Chris Stapleton. Lewis brushed off the comment and says he does not like getting hung up on accolades or being part of a “scene.” Coming from other artists this might seem a little forced, but for Lewis, it comes off just as sincere as everything else he’s said.

That outsider spirit is what seems to be driving Lewis, pushing him toward his next show, his next song, his next album. At the end of the day, he does not care what the country world says about him, what the critics write about him, or what you and I think of him. He wants to make music that he is happy in the style of the greats he grew up listening to, and, in a world where artists are more willing than ever to compromise, it is something we should all stand back and appreciate.