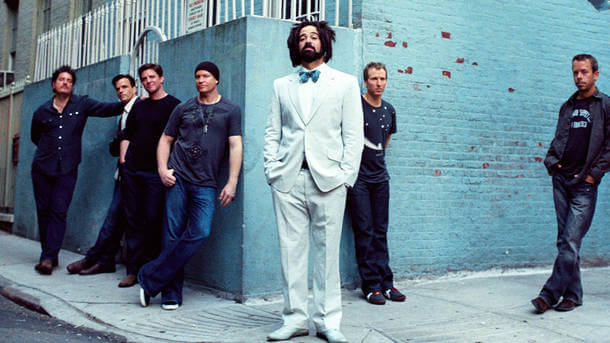 You would be surprised how often musicians don’t know that much about music — or, should I say, music history. Most of the time, they’re exactly like the majority of their audience — they grew up listening to a few select artists that formed the backbone of their musical vocabulary. This isn’t an indictment. If anything, it makes the artists more relatable because returning to the same records that we discovered in our formative years is something all music fans do. As a music journalist though, it can be a bit disappointing to find out that the people you are interviewing don’t have the same voracious appetite for exploring music and its history, that they aren’t crate-digging record nerds like me.

This wasn’t the case with Counting Crows singer Adam Duritz. Though his band does have an upcoming show at Stir Cove, they don’t have a new single or album to promote, so instead, we mainly discussed records.

In addition to his role with Counting Crows, Duritz is the co-host of the Underwater Sunshine podcast along with his friend and music journalist James Campion, and the pair is focused on sharing not only the music they love but the stories and history behind it.

“What we’re trying to do on the podcast is play music that’s just great and get people to understand how many great kinds of popular music there are,” says Duritz. “I grew up listening to free-form radio, particularly KSAN in San Francisco, and they would just play everything. I never had any sense of ‘this is my genre and you guys suck,’ I listened to everything.” That list includes everything from Miles Davis to classic country and even early punk. On Underwater Sunshine you’re likely to get as eclectic of a mix; from obscure tracks from a band like the Only Ones to an exploration of the Neptunes collection of hits to a three-part breakdown of the Beatles and their legacy.

“There’s an embarrassment of riches,” Duritz says, but goes on to say that when you can access everything you like it makes finding new material difficult. He believes it’s easier for people to become overwhelmed and fall back into rotating the same records from their favorite bands.

I take this opportunity to ask him about one of his most beloved bands, Teenage Fanclub, and why he thinks they weren’t bigger in their heyday.

“It wasn’t making a sort of statement,” he says and mentions that it didn’t make waves in the way that Nirvana did.

During the early part of the ’90s, Counting Crows, Teenage Fanclub, and Nirvana were all signed to DGC/Geffen. “We were all fans of each other,” he says. “The thing about Nirvana though is that they were a statement. So much so that anyone that everyone that dressed like Kurt or sounded slightly like that was something to rally behind for the next five years or so whether they were any good or not. Kurt was brilliant, but not everyone that wears a plaid shirt and a pair of Doc Martens is.”

As our talk turns towards labels and record release I ask why it has taken so long to record a follow-up to Counting Crows last record, Somewhere Under Wonderland, which was released just a hair over four years ago.

“I just don’t know how to put records out right now,” Durtiz tells me, going on to say that releasing one or two songs at a time seems to be the sensible thing to do. “I feel like when we release single songs they just don’t have that same impact as the bodies of work do where you can sort of get lost in an emotional world. It’s a case of do we play to our strengths or to the more sensible way of making commerce now.”

The lack of new material has not stopped the band from hitting the road, however. Arenas, amphitheaters and clubs have all coming calling and legions of fans flock to hear the band’s legendary catalog, something which Duritz says he is extremely grateful for.  Life on the road, however, can be quite taxing, especially with a tour schedule as hectic as the Crows. In the past, he’s even compared it to being trapped on a submarine.

“You get in this container and you get out at a hotel or a backstage which looks exactly like the place you were at the night before,” he says of touring. “It’s just a weird life, a weird removal from socialization. It’s motion that doesn’t feel like motion.”

“Life on tour is about being right where you are,” he says. “The next night’s not coming any sooner, and if you start thinking ahead you’ll drive yourself crazy. It doesn’t go any faster and it’s very repetitive.”

As he’s describing it, it sounds miserable. Duritz sounds dejected as he talks about the isolation of the experience and the toll it can take on relationships. Just recently, his girlfriend of about a year came along and he mentions how frazzled she was by the whole thing. It makes you wonder why anyone would choose this sort of profession.

Towards the end of our chat, though, Duritz talks about playing a show a few nights earlier. He said it was a smaller city and the crowd wasn’t the size he expected. Just looking out into the crowd made him bummed out he said, and now I’m even starting to feel bummed for him. Then he starts talking about singing, and the experience, and being able to feel the energy when he’s on stage, and I can hear a flicker of excitement grow into a small blaze. That’s when I realize he wouldn’t choose any other career. Music is basically Duritz’s whole life — playing it, recording it, producing it, and pontificating about it online — it’s all he really knows. Sure there are hardships associated with the job, but that’s the case with just about every profession. It’s the closest thing I’ve had to a “Stars – They’re Just Like Us” type of moment.

Before I can ask what it is specifically that excited him about the performance, the call is dropped. I trying calling back but the line has gone completely dead. Even his publicist isn’t able to reach him. At that point it was official, he’d gone back on the submarine, back to life on the road.

For tickets to the Counting Crows show at Stir visit Ticketmaster.