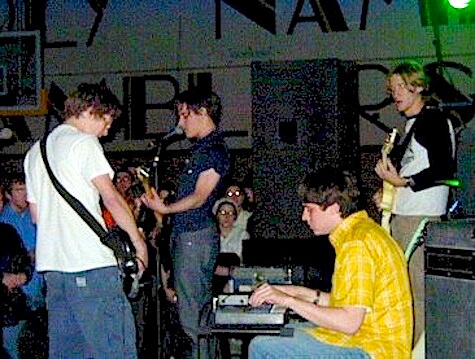 Some are calling the return of Desaparecidos — the punk band fronted by Omaha’s grand poet lyricist Conor Oberst — a reunion. Maybe it is. But that presumes the band at some point “broke up,” which they never really did.

The band’s brief tour with emo act Jimmy Eat World in 2003 was a dropping off point. It was a tour that, according to Desaparecidos guitarist and co-founder Denver Dalley, came out of nowhere.

“When we were on the road for that one, Conor would go out to the van and listen to mixes of Lifted,” he said.

Lifted is, of course, Bright Eyes’ 2003 album Lifted or the Story is in the Soil, Keep Your Ear to the Ground, which would turn out to be a game changer for Oberst, rocketing him to the next level of indie stardom. “We knew he was going to go off and do his thing and we’d do our thing,” Dalley said. “We stay away from the term ‘break up.’ Things were left open-ended, but Bright Eyes took off, and then Conor did his other projects and we did our things, too.”

And seven years passed. But in that entire time, Dalley said, band members would bump into each other and say, “We should do that thing again…”

It was a more innocent time when Desaparecidos formed in 2000; a time when Omaha musicians were only beginning to realize the possibilities that music had to offer, when, as Dalley recalls, the scene “really did feel like a big family.”

“I remember going to shows at Sokol Underground and feeling like I knew 95 percent of the people in the audience,” Dalley said from his Nashville home. “You would see The Faint and Cursive guys and all the other bands. Back then, the bars were only open ’til 1, and we always ended up at someone’s house afterward. It was a close-knit family kind of vibe.”

Dalley had just moved back to Omaha to attend Creighton after finishing high school in Nashville, sharing a dorm room with The Faint’s Clark Baechle. “I talked to Ian McElroy about starting a band,” Dalley said. “We didn’t know what we wanted it to be, something experimental. He said he had a drummer in mind. I knew of Matt (Baum) forever, but hadn’t met him until our first practice.”

Somehow Oberst caught wind of the project. “It was around the time when he’d just finished a bunch of touring for (Bright Eyes album) Fevers and Mirrors,” Dalley said. “I don’t know if he was burned out, but he said, ‘I want in.’ So it was the four of us. When I got back from the holidays, Landon (Hedges) had been added to the mix. We’d all been hanging out together anyway.”

The rocket known as the Omaha music scene had only just been rolled out to the launch pad in 2001 and was about to lift off. While Cursive, The Faint and Bright Eyes had enjoyed a modicum of success with earlier albums, no one expected the national attention that would come next.

“I don’t think anyone had any idea it would go as far as it did,” Dalley said about the Omaha music scene. “There was never a vibe that everyone was going to get big. It was more like, ‘This is something you can do — you can legitimately work and pursue a career in music,’ because you saw your friends beginning to go on tour. It was mind blowing that Conor had toured Japan — an unreal opportunity to have through music.”

Being plopped right in the middle of that scene was a “strange opportunity” for Dalley, who had only been in small bands in high school. “Desaparecidos was my first real, actual band,” he said. “Because of Conor’s involvement, we immediately had a record label, a booking agent and a press agent, stuff that normally you have to work really hard for and earn. It was this unreal opportunity to walk into this amazing situation, and I felt kind of like I had to go back later and pay my dues.”

He would get his chance, but first he had to make his mark in this band. Desaparecidos practiced at Saddle Creek graphic designer Zack Nipper’s house at 52nd and Blondo in “the basement with the Fevers and Mirrors wall,” Dalley said. “I started out with this crazy guitar synth effects unit thing. The initial idea was to be really ‘out there’ with sounds, but very quickly we figured out everything was going to be distorted and loud. I ditched that effects thing after the first day.”

While Oberst was renowned for Bright Eyes, everyone else in Desaparecidos had been involved in other projects. Both McElroy and Baum had gone on tours as part of the Bright Eyes band; Hedges was a member of Saddle Creek band The Good Life; Baum played drums in local emo act Red Menace, while Dalley had been in a band with Joe Knapp of Saddle Creek band Son, Ambulance.

Desaparecidos was a chance for everyone to leave their past band baggage at the door. “When the five of us got into a room, there was loud, chaotic energy,” Dalley said. “I gradually brought in more pedals and sound effects.”

The songwriting process was organic and immediate. Dalley pointed to the song “Mañana” off the band’s debut album, Read Music, Speak Spanish, which was born out of a simple riff and “took about five minutes to write.”

“Conor has a real instinct for this stuff, obviously,” Dalley said. “The first time we play something through he will immediately lock in on a melody and scream nonsense words. It’s pretty cool because it can redirect the entire song based on the vocal. One note will rub against an idea causing us to change it.”

The practices led up to the band’s first public gig, a benefit concert held April 21, 2001, at the gymnasium of Omaha’s Holy Name High School. Also on the bill were Saddle Creek Records bands Sorry About Dresden (featuring Oberst’s brother, Matt), Cursive and Bright Eyes. Built like a concrete bunker, the field house’s acoustics were nightmarish.

“(The concert) happened for an unfortunate situation and a great cause,” Dalley said, “but it was a last-minute thrown-together thing. Holy Name was awesome for letting us use that space, but the gym was so cavernous, everything was echoing. It was hard to hear any of the bands.”

Despite that, fans walked away from their short set knowing that, unlike Bright Eyes’ acoustic-driven, heart-achy balladry, Desaparecidos was first and foremost a rock band. Oberst’s croon had been transformed into a scream backed by high-end power chords and heavy-as-hell drums. Though punk-leaning at its core, the band’s sound was distinctly poppy and appealing amidst the waves of thrashing distortion.

Fans were eager to hear more, especially in a better venue. They’d get their chance over the coming months, prior to the band heading out on a brief tour with Cursive in support of their first single “The Happiest Place on Earth,” released by Saddle Creek in 2001. That would be followed by a full tour a year later when LP Read Music, Speak Spanish was released. But in the midst of all this was the knowledge that Oberst would eventually be out again with Bright Eyes.

“Everyone knew from the get-go that having Conor in the band meant everything was always subject to change,” Dalley said. “It made the band what it is, but at the same time, no one had false hopes or false information. It was never a bummer.”

Still, it’s doubtful that anyone in the band realized that Desaparecidos’ two weeks of touring with Jimmy Eat World and Rilo Kiley would be the last time the band would perform for seven years.

“Back in ’03 I was in the studio doing one of the last Statistics records,” Dalley said, referencing one of his other bands. “(Desaparecidos) had been working on new songs and we came down to Lincoln to demo them instrumentally with the idea that we could use the stuff later.”

Those tracks would be the seedlings for what would become their follow-up to Read Music, but it would be years before they would be heard again. Dalley said the call from Oberst to discuss reforming Desaparecidos in 2010 came while Dalley was on vacation with his family in Hawaii. “I left paradise for the band,” he said. ‘It was a funny position to be in, but it was perfect timing.”

The occasion for the reunion was The Concert for Equality, an event held July 31, 2010, in the heart of downtown Benson to raise awareness about unfair treatment of undocumented workers, specifically in Fremont, Nebraska. Oberst had become a national focal point for the cause. Among the performers were Bright Eyes, Gillian Welch, Simon Joyner, a reformed Lullaby for the Working Class and Desaparecidos.

“Individually we were blown away at how good it felt to play again; how it wasn’t forced,” Dalley said of the band’s first practices after their hiatus. “It was instinctive and really motivated us.”

But right afterward, Oberst went out on 18 months’ of touring with Bright Eyes in support of The People’s Key (2011, Saddle Creek). When he returned, Desaparecidos played the Maha Music Festival in Omaha in August 2012. “Then we started doing tours every six months or so and recording new songs as we wrote them,” Dalley said. “There was no intention of doing another album at first, just a series of 7-inches, but before long, we realized we had half an album written.”

Payola, released on Epitaph Records this past June, has to be one of the longest-awaited follow-ups in history, coming 13 years after the release of Read Music, Speak Spanish. The album is full-on social and political commentary, with Oberst raging against the machine as only he can, covering topics as diverse as the music industry, political anarchy, mass murder and social unrest in a series of musical statements that clock in at three minutes or less.  SPIN called Payola Oberst’s best album since his 2008 solo debut, and “the white male rage of the year.”

Dalley thinks “political” is too broad a term to describe the music. “To me, yes, there are some political aspects, but if you were to summarize songs from both Desaparecidos albums it’s more like social commentary,” he said. “There’s something about the word ‘political’ in my mind that seems to pigeonhole it.”

And a typical Desaparecidos show is more like a rock concert than a political rally, as fans will see for themselves when the band heads out on a mammoth tour that begins Sept. 10 at The Waiting Room and runs through Nov. 20.

“After that, who knows what the future holds,” Dalley said. “It could be a thing where we play up to the last show and then take off for the winter and pick up in the spring, or nothing happens.”

If you’re on the fence as to whether or not to see the band on this tour, Dalley said, “There’s a chance there won’t be a next time.”

“It sounds like I’m trying to sell tickets, but that’s the real truth of it,” he said. “None of us know what the next thing will be.”