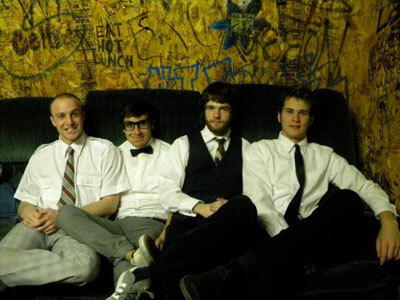 Betsy Wells is a band of boys just getting some distance from their teenage years, but youth and young manhood belie the band’s rapid maturation. Led by guitarist and lead vocalist Jordan Smith, the band is set to release its second EP, The Calm, as a Friday night show at the Waiting Room Lounge, 6212 Maple St. “We all just freshly turned 21,” Smith says over beers at the Pizza Shoppe in Benson. The band has been around since the four-piece were all in high school, starting with Smith, guitarist/vocalist Matt Regner and drummer Collin Murray. Smith and Murray went to Gross High Schoool, Regner went to Creighton Prep. The band played its first shows during the guys’ senior year of high school. Bassist Nate Ruiz joined after that. After messing around with the name Bad Kid English, the band decided to swipe the name of a friend of Regner’s sister. Betsy Wells has stuck for about four years now. “We just took her name,” Smith says, joking that she had to subsequently get a new name. “But she was okay with it,” Murray added. The band’s namesake has yet to see the band play, but there’s a possibility she might show up for the release show. Initially the band jammed out playing classic rock covers, especially Allman Brothers and Thin Lizzy tracks. That led into original songs with an Americana vibe, Regner says. There’s been a lot of sounds between those early days and now. “We’ve been all over the place,” Regner says. “I wanted to be Duane Allman until I was about 20.” Smith says the band shares the same basic roots, but have evolved as they have grown their own musical perspectives. “I think the change just happened naturally,” Smith says. The new EP was shaped by a desire to break their style out of the shadow of acoustic indie-folk. Expect heavier arrangements and more guitar distortion, Regner says. It’s a left turn for a band that already built up a following in town, one that catapulted them onto the local stage of last year’s Maha Music Festival. The band recorded the release with Jon Rabe, mostly spearheading the sessions themselves. “We had a lot more freedom to do whatever we wanted,” Murray says. The four-song release shows the band stretching their musical palette and the songs themselves. “It’s just a step in a new direction,” Regner says, later joking “It’s a long four songs.” The slow-burn country anthems seem like they could have been made by the Cowboy Junkies or an all-male version of Mazzy Star. The band doesn’t really have a genre they’d place themselves in, though the boot-gaze moniker that’s been picked up by Spin magazine and others isn’t far off. Blame the lack of labels on Myspace’s fade into obscurity, as bands no longer feel pressure to pick a genre for their band profile. “Describing our genre is the hardest thing about this band,” Regner says. Smith says the initial aim was to do a full-length, but as they got in-depth on recording and writing, the band decided to just do the EP. Smith says it felt like these new songs branch off dramatically from what Betsy Wells has recorded previously. “We’re in a new chapter,” Smith says. The hope is to send out copies of the EP to labels and to couple that with regional touring to build the band. The band has done an eight-day Midwest tour this year. “We want to see what people think of it,” Smith says. Those new songs have stemmed from Smith, who starts the songwriting process with acoustic songs and then takes them to the band to jam it out and add to it. “He’s the center of the songwriting process and it just kind of branches off from there,” Regner says. Smith says he writes with the goal of taking it to the band and having them expand on it. He says he usually will have harmony parts in mind for Regner. The EP was the most intensive recording the band has done, Smith says. They hope to propel the recording momentum to a full-length later this year. “It was a learning process from the beginning but it kind of turned out to sound like we kind of knew what we were doing,” Regner says. Betsy Wells CD release show w/ Kite Pilot, Sun Settings and DJ Nater is Friday, June 17 at the Waiting Room Lounge, 6212 Maple St. Tickets are $7 at the door. For more information, visit onepercentproductions.com.