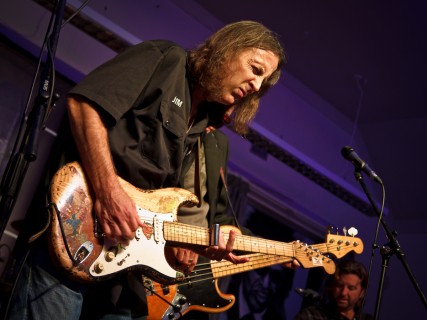 The blues-infused roots rock of Jim Suhler & Monkey Beat is up next week with two local shows. The Texas band brings their undeniably danceable riffs to Lincoln’s Zoo Bar Wednesday, Jan. 14, and to The 21st Saloon Thursday, Jan. 15. Both shows are 6-9 p.m. Suhler’s most recent release is Panther Burn. The title track tells of going back to Panther Burn, MS, on a hell-bent ride for some juke-joint partying. “I got a powerful thirst, I got a V-8 Ford, I’ll make love to you on the running board. Throw your garter on the dash and hang on tight. We’re gonna follow our muse and drive all night.”

Part of Suhler’s engaging appeal is the versatility and invention he puts into his music. He’s a skilled guitarist but he knows how to make the guitar work count, his approach changes to suit the song, from spare to pretty to raw and raucous. The CD’s music is built to party with road trips, late nights and just the right amount of sweetness and beauty. Special guests on the disc include Carolyn Wonderland joining Suhler for a Texified gospel romp “All God’s Children Get the Blues Sometime.”  Jason Elmore, Kim Wilson and Ray Benson also contribute to the goings on. See jimsuhler.com.

The Kris Lager Band spent an unexpectedly extended stay in Ogden, UT, right after the New Year began when their van’s transmission went bad. They managed to get close enough to Ogden to get assistance and make their gigs there, but by Jan. 3 Lager had posted this message to Facebook:

“As I type this our band van is in the shop in Ogden, UT, with repairs way beyond our means. It seems we are going to have to junk the van. Which is very unfortunate considering we still owe $3,000 on it. We are currently on tour and need a vehicle ASAP, so I thought I’d turn to you, and ask for your help… The money you pledge to us will go towards paying back our debts on the old van and finding a new and much more reliable vehicle.”

In less than 24 hours, fans and friends had donated over $4,400 dollars in individual donations ranging from $5 to several hundred dollars. At press time, the fund was up to $7,350 and the band was working out transportation plans to finish the remaining week of gigs. See gofundme.com/krislagerband.

In other news, the Lager band’s highly anticipated CD Platte River Runaway, produced by celebrated bluesman Tab Benoit in his Houma, LA, studio, is now available for sale via digital download at krislagerband.com. Benoit not only produced the disc but also laid down some pedal steel and drum tracks. KLB has an ongoing relationship with Benoit, periodically doing short tour runs opening shows for the popular Louisiana musician.

Kris Lager Band is also heard on Andy Frasco’s latest disc, Half a Man, and has been backing him on tour. KLB is featured in an upcoming documentary about hard-charging roots-rocker Frasco, who bills himself as “Party Blues with a touch of Barefoot Boogie” and whose shows reviewers have referred to as “orchestrated chaos.” The band is featured along with some of Frasco’s Los Angeles musicians in recent music videos. See andyfrasco.com.

The organizers have created a 2015 Omaha Rockabilly calendar that is for sale to help fund future events. Follow the action at facebook.com/groups/omaharockabilly. For those interested in retro culture, Omaha now has a couple more shops on the scene focusing on vintage and vintage reproduction clothing including Daisy Jones Locker in Benson and Atomic Bombshells at Midtown Crossing.

Fine guitarist Eddie Turner and his band The Trouble Twins are up at The 21st Saloon Thursday, Jan. 8, 6-9 p.m. with their jazz-inflected blues sounds.

Self-proclaimed “Instrumental Surf/Spaghetti Western” band The Sub-Vectors has a CD release Saturday, Jan. 10, at The Waiting Room, 9 p.m. with LIFE IS COOL, Edge of Arbor and The Decatures. See facebook.com/subvectors.

Josh Hoyer & The Shadowboxers second CD, Living By the Minute (Silver Street Records) drops nationally Tuesday, Jan. 13 on iTunes with targeted market radio support and national promotional efforts. The group will be on tour in Texas and through the South and upper Midwest in late January and early February. Before they hit the road they have a gig at Parliament Pub in Omaha next Saturday, Jan. 17, 9 p.m. and the Zoo Bar Friday, Jan 23, 9 p.m. See joshhoyerandtheshadowboxers.com.