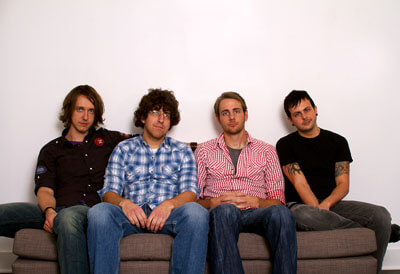 Instrumental rock wasn’t the initial plan for the Answer Team.

As the band was beginning, they kept seeking and finding vocalists. And each time, they kept losing them.

“None of us wanted to be in an instrumental band,” drummer Brandon Bone says.

But each time the Answer Team would play without a vocalist, people would recommend the band stick to it.

They ultimately embraced their post-rock leanings and got more creative with their songwriting style and rhythms. Bone says it became a little more free-form as they bridged the gap between traditional indie rock sounds and post-rock instrumentals.

The band’s current sound feels crystallized and fully-conceived on their first full-length, O Sad and Future Human, which the band is self-releasing this week.

They recorded drums and bass with Joel Petersen at Enamel Studios, then tracked the guitar tracks with A.J. Mogis at ARC Studios. Additional violin, piano and spoken parts were recorded with Matthew Tobias at Empty House Studios. The sessions started at the tail end of 2010 and were wrapped up before the onset of spring this year.

“When it comes down to it, the album was made over the course of ten days,” Bone says.

The band had previously recorded some EP releases, with a three-song release in 2008 being offered only as a download. Bone says at the time, the band thought the download would be a better bet than physical product, but he quickly learned otherwise.

“When we didn’t have CDs, people kept telling us we needed them,” he says.

This time, they will offer a download-only option, in addition to a CD, which includes a download if you order the CD from the band’s website.

Of the 300 CDs the band had produced for the new album, 50 have been sold as pre-orders. The band is also selling the album as download-only.

Guitarist Tom McCauley says the earliest of the songs date to nearly six years ago, basically spanning the history of the band.

McCauley and Bone had played together in a hardcore band before starting the Answer Team.

The new band started taking form around acoustic songs McCauley was writing. Aside from trying out vocalists, the band also spent plenty of time practicing and trying to find other pieces to round out its line-up.

“It took about a year to get off the ground,” McCauley says.

Guitarist Jason Bejot was in earlier on, but the band also went through a few bassists before finding Dustin Treinen.

“Dustin really made us a lot louder and more powerful as a band,” Bone says.

McCauley says “Does This Shirt Make Me Look Dead?” off the new album represented a watershed moment as the band was embracing its life as an instrumental rock band.

Bone took the song to the band and then described what he imagined the finished version to be. It came together very easily.

“I had written it to be really layered and simplistic,” Bone says.

The entire band has focused on that mix of simple, direct music that is also highly layered as they have shifted to the more thoughtful, slower, intertwined post-rock sound that is now their core sound.

It’s also changed how they play, given that each part connects so directly to the greater whole of a song, Bejot says.

McCauley says he’s moved towards a simpler, cleaner style on guitar. The band’s songs give all the instruments space to breathe and shine through.

“There’s no hiding really,” McCauley says. “If it’s not totally together, it sounds terrible.”

Still they haven’t lost their eye towards concision in their playing, now that they are fully accepting that they are traveling a post-rock/instrumental rock path.

Bone says the band doesn’t try to pass the 10-minute mark on any song. It’s all about being tactful about running time and not letting any musical passages be long for no specific reason.

Bejot says they try to tap into specific feelings as their songs undulate and unfold.

The Answer Team plays an album release show w/ Back When and New Lung Friday, August 19th at the Slowdown, 729 North 14th St., at 9 p.m. Tickets are $7. For more information, visit onepercentproductions.com.