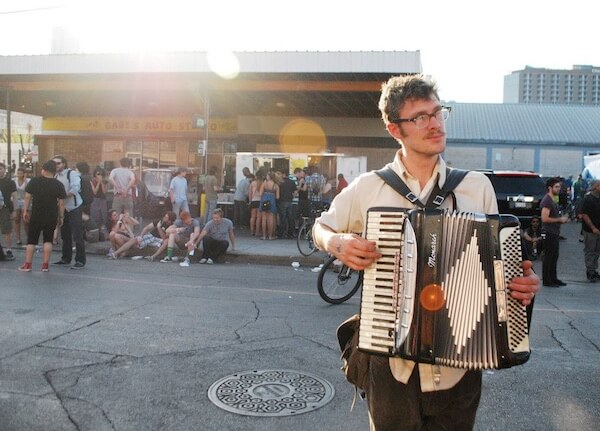 Though singer/songwriter Stelth Ulvang makes his nut as a traveling member of The Lumineers he’s got his own thing going. His sophomore album, American Boredom, was written between tours with his Lumineer pals and has that same winsome folk-rock style of acts like John Wesley Harding and Michael Penn. “I somehow never stop touring,” said the Ft. Collins native. “I enjoy the DIY and indie contrast (of his current tour) to the Live Nation/ Universal shows the rest of the time.”

I caught up with Stelth and he did the ol’ Ten Questions survey. Check it out.

Stelth Ulvang: Forced to pick one, probably Built to Spill, There’s Nothing Wrong With Love.

I really hate “Summer Lovin” UGH it grinds my bones.

Easy, I believe strongly everyone should try psych mushrooms at least once.

Cape Town, South Africa, has pulled me back 5 or 6 times. Love it.

Has ANYONE actually had a good gig in Milwaukee? For a city that prides themselves on their beer consumption, racial segregation, has more riverbank or lakeshore that smells like fish than Chicago, and the cities nickname is “Cream City” Easy answer.

Music (with the Lumineers) has become my day job of sorts, but also I suppose last time I brewed coffee for money was 10 years ago! (Salud!).

I think I’d be a pretty good salesman at ACE hardware; I would never be a dental assistant. One time a dental assistant asked me what I did for a living, I said, “I’m a musician.” She replied, “I don’t really listen to music.” Jaw dropped.

Haha. I have weird hitch hiking stories from Omaha, too long for here. But I’m a big fan of Saddle Creek Records. Shaped my musical scope as I became a musician undoubtedly. But also the Lucky Scalpee is a good one, the one about the crane that stole a child, and the weird one about Pete Postlethwaite having a nervous breakdown in The Drover and a waitress calmed in down and they fell in love and got married…. that one.