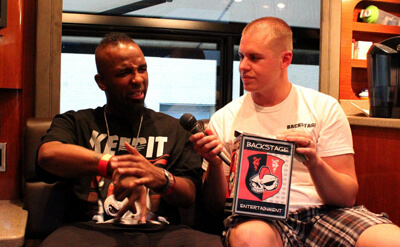 Tech N9ne brought his Hostile Takeover tour to Omaha, NE, last Sunday, May 27th. During their time in Omaha, Backstage Entertainment got to talk to Tech N9ne and Machine Gun Kelly about the tour and the other things they have going on. When we talked to Tech N9ne, he was excited to be in Omaha because it’s close to Kansas City, MO, where he grew up. Many of his friends and family made the drive to the show to see him which made the night even more special.

He also talked about how great a tour he thought this was because of the cross over in fans. Many fans of the artists on this tour become more familiar with other artists which in turn helps everyone out. When we asked Tech N9ne about the craziest moment on tour, he said it was a food fight that Machine Gun Kelly started when they were in Arizona. Later in the night when we interviewed MGK, he said he just simply asked another band member what he would do if he through a muffin at him. Everyone laughed but didn’t know that he was serious. From there, MGK through it and started a food fight that didn’t sound to please the staff at the place.

Tech N9ne told us a crazy story about being in Des Moines, IA, and having an upset stomach right as he got on stage and had to use the public restroom in the venue just as his performance was starting. Talking about crazy stories, Machine Gun Kelly talked about what happened one night he hung out with Mike Posner and some of the things he’s done backstage.

Check out the links below for the full interviews and to find out what the crazy things were that MGK has done. You can also hear them talk about their most recent projects they have released.