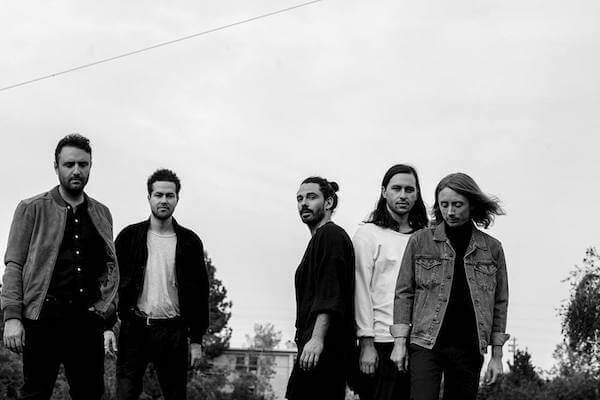 When California band Local Natives played a sold out show at The Waiting Room in 2010, the buzz in the crowd that evening was that we were seeing the next Arcade Fire. In the end, they turned out to be something entirely different. The band would return to an even bigger Omaha stage when they played the 2014 edition of the Maha Music Festival. And now they’re playing a sold out Slowdown this Saturday, April 8. That’s an impressive trajectory, though seven years into their career, Arcade Fire was playing stadiums.

Still, Local Natives has nothing to complain about. Their latest album, Sunlit Youth (2016, Loma Vista), anchored by singles like the infectious “Past Lives,” carries their indie-rock sound forward in the same rhythmic, dance-inspired direction as their 2010 debut.

We caught up with the band and gave them the Ten Questions treatment. Vocalist and multi-instrumentalist Kelcey Ayer provided the answers:

Local Natives’s  Kelcey Ayer: One of my all-time favorite albums (can’t pick just one, that’s crazy) is Portishead’s Third.  I had always loved more somber, melancholy music, but I never had connected to a record that was so fully immersed in that sentiment before.  It was unapologetically and intensely sad.  And the tones of the instruments seemed laboriously fucked with in a way that sounded the perfect amount of “off.”  I felt like it gave me permission to be the kind of artist I wanted to be, like it was ok to go so deep into a feeling.

I worked at a pizza chain called California Pizza Kitchen in southern California, and they only played top 40, which is not totally terrible, unless you’re forced to listen to it for many many hours a week.  Whenever I’m out and about and a song comes on from that time, it always brings me back to the mid 2000s and I start immediately trying to remember an order, throw up a little in my mouth, and then realize I’m being weird in a grocery store and stop it.  There is tie for the most egregious offender of those days, and it’s between Blondie’s cover of “The Tide Is High” and KT Tunstall’s “Black Horse and The Cherry Tree.”  I don’t think any song is inherently bad, it takes a lot of effort to make anything, but circumstantially for me, I really, really hate those songs.  I just hate them so much.

Creating something that you couldn’t create yourself, whether it’s making a song or playing that song live in a room, having people to rely on to bring a vision to reality is my favorite part of being in a band.  Second-place is touring around the world, which if you’re lucky you get to do, and fortunately we are.  I’m very grateful for that.

Having to compromise on a vision you believe in for the greater good.  We’re always coming up with ideas for songs, or music videos, or ways to promote the band, and nine times out of 10 they get shot down by the group, which makes it hard to stay motivated.  But that’s the way it goes in a group of creative people.

I love beer.  The US has been a great place for beer over the last 10 years, so to be a beer fan is very exciting right now.  There are breweries, brew-pubs, bottle shops; all sorts of beer outlets popping up everywhere right now, so it’s pretty easy to find a good beer anywhere you go these days.  I was at a bar in the middle of nowhere Kansas and they still had Lagunitas IPA on tap, it was great!

Los Angeles is home and will always be our favorite place to play.  We’ve spent the most time there and played almost every club when we were coming up, and it will always be the first city to have embraced us.  Austin is a close second, SXSW was a big help for us.

Those files are sealed because we wanna play there again and have a better show.  All I’ll say is it was somewhere in England.

This is our only job, yes.  I remember back in 2009 arguing with Taylor in Santa Barbara about upping our per-diems from $5 a day to $10, but he’s a financial stickler and was right to deny me.  We just didn’t have the money.  I would buy Subway foot-long subs and eat one half for lunch and the other for dinner.  We barely scraped by.  So when we did a publishing deal at the end of 2009 and got our first bit of money, I bought a Chipotle burrito and ate the whole thing!  Since then it’s been a thrilling roller coaster ride of getting fat and skinny now that I can afford to.

I’d love to act in something, or make a movie.  I’ve always been really into film and love getting taken away from reality and into a new world.  I feel like I’m a dreamer, and watching movies is like being in a dream while you’re awake.  When it’s really hitting you hard it feels like a drug.  As far as a profession I’d hate, I guess anywhere I’d have to be quiet.  I’m a loud guy.

I never heard of Omaha until I fell in love with my first favorite band: 311.  Super random for sure, but your first music loves always are, and I’ll always have a soft spot for them.  I felt like I was in the twilight zone the other day when Dark Days was pitted against a new 311 single for a radio station voting contest in Kansas City.  My brain almost broke to read Local Natives and 311 in the same sentence.  I wholeheartedly believe in voting, but in that case, I chose not to.

Local Natives plays with Little Scream Saturday, April 8, at The Slowdown, 729 N. 14th St. This show is SOLD OUT. Showtime is 9 p.m. For more information, go to theslowdown.com