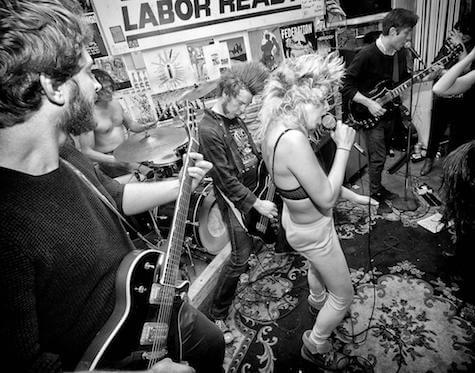 Tonight at Milk Run Austin indie band A Giant Dogs perform. Just this second, I received back a Ten Questions response from the band. Here it is:

A Giant Dog: Sparks, Angst In My Pants. This is one of our favorite albums and we have been doing a cover of “Angst In My Pants” at our shows recently. Sparks had a big influence on us when recording the new record, PILE, and this album is on repeat while driving on tour.

It’s a never ending list. Nothing in particular comes to mind.

We started our band as a way to have fun, make music and hangout with other bands in Austin and around the country. We’ve also been close friends since high school and played in different bands together. So it’s great being able to play music and travel with your long time buds. Aside from that aspect, we’re generally unsettled with how repetitive, boring and predictable rock music can be. One of the best things about being in a band is considering the bleakness out there and then finding ways to make a song more creative, interesting and against the grain. I’m not sure how well we do that, but it’s something we enjoy trying to do.

The music biz is tough right now and that is a constant frustration we and other bands have to work around. Music has always been tough, but I think it’s okay to say there is a lot less money now than in the early 2000’s pre-Napster. There is a bad gap between good music and getting it to people who will appreciate it. I hope streaming can get its shit together, and this is a problem they need to solve. I know that journalism and film are in the same boat.

Mostly weed and more legal substances these days to keep our voices in tact and be able to keep up with the fast pace lifestyle we live. It’s been most interesting buying weed across the U.S. in the last two years. It’s funny buying it in Colorado and then sneaking it through Utah like you’re still at your parents house and sneaking in past curfew.

Minneapolis, Chicago, New York and any town with a passionate promoter who knows how to put together a cool show. The funny thing about live music is that any town can be killer for shows. You just need one guy or gal who loves putting on shows and knows what bands are good.

Pittsburgh. We showed up to a DIY space that was had the right elements for a good show – big empty house with a good turnout and decent bands booked. But the place was run by kids in pajamas eating ramen. There was a thunderstorm that day and they were afraid of the thunder thinking the show should be canceled. We bought them a six pack and passed on the show.

We work part time or remote jobs in addition to making music. Andrew (guitar/vocals) is a door guy, Graham (bass) makes pizza, Danny (drums is a waiter, Sabrina (singer) works at a Ramen place and has an Airbnb and Andy (guitar) is a software consultant. Multiple incomes is the main way we get by and it’s well worth the time and effort to be able to tour and keep making records.

Sabrina was talking about becoming an acupuncturist the other day. Eastern medicine in general is interesting and it seems that could be a rewarding job.

Nothing yet. Friends have said the Milk Run is cool and a good place to play. Let’s see what stories come from the show tonight.

A Giant Dog performs with Kitten Forever, No Thanks and Worried Mothers tonight at Milk Run, 1907 Leavenworth St. Tickets are $8, show starts at 9 p.m.