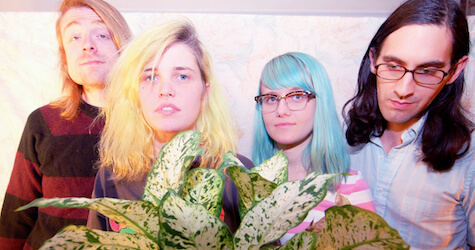 If there was justice in this bitter ol’ world we live in, Columbus Ohio band All Dogs would be playing to a packed house at the 500+ capacity Waiting Room Friday night instead of the charming-though-cramped 50-something-capacity Milk Run.

The band’s latest release, Kicking Every Day (Salinas, 2015), is a bitingly beautiful collection is as good as (or better than) anything indie rock superstars Courtney Barnett or Speedy Ortiz has ever released. The four-piece, anchored by frontwoman Maryn Jones (who also played in Saintseneca), plays full-speed rock melodies that soar atop of chiming guitar and gut-kick rhythms that recall daydreams of ’90s bands like Belly, Throwing Muses, Liz Phair and (appropriately) That Dog.

We asked All Dogs to try our Ten Questions interview. Here’s what frontwoman Jones had to say.

All Dogs’ Maryn Jones: That is a really rough call. But if we’re talking lately, I’d say it’s a tie between Heaven or Las Vegas by the Cocteau Twins or For Everyman by Jackson Browne.

That song that’s like “Shut up and dance with me” (“Shut Up and Dance” by Walk the Moon). I am angry right now just thinking about it and I’m sad I had to even acknowledge it exists. I hope they’re not All Dogs fans. Sorry guys.

When you’re having a good night and the set is really high energy and fun. That’s pretty unbeatable.

I don’t really hate anything about it, but super long tours can be rough. We just passed our month mark and we’re all really nice people but wow are we getting mean.

I know a lot of people probably say this but I truly love playing in New York City. I don’t care if it’s basic of me to say so, it’s just true.

One time we played at this house (the people who lived there were great and nice and it was a cool show overall) and this super punk dude was moshing really hard and like spitting on people. We stopped playing, which really wasn’t fair for the cool people who wanted to see us play. But an asshole’s an asshole and we don’t vibe with that.

I personally tour with this band and other bands so much that it’s dumb and I kind of manage to pay everything through that. Sort of. My bandmates have jobs like normal smart people.

I always wanted to work with horses! Probably still will someday I hope. I love them. I would hate being a truck driver. I am on the road so much already and imagining being alone and doing crazy long drives make me want to curl up in a ball and cry.

Well I’ve actually spent a surprising amount of time there because my other band (Saintseneca) recorded there so I have quite a few stories to share myself. One time I went to a party and put on a fur coat I found and chain smoked cigarettes (I don’t smoke) and took a bunch of pictures of myself. That’s not a very good story I’m sorry.