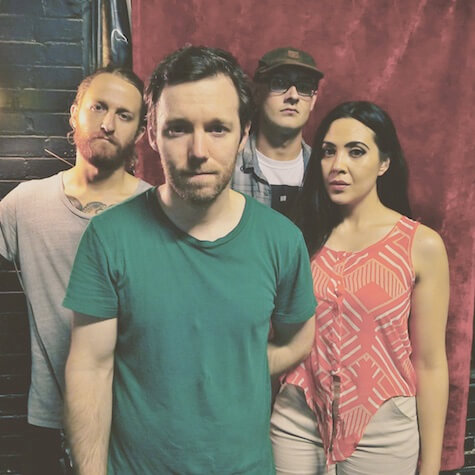 American Wrestlers is the brainchild of St. Louis-by-way-of Scotland songwriter Gary McClure, who broke through the surface with a homemade low-fi debut that wowed critics and fans. On his follow-up, the just released Goodbye Terrible Youth (2016, Fat Possum), McClure left the bedroom and entered the studio with three of his mates for a collection of crisp indie rock songs destined to be the soundtrack to this generations’ next-summer shenanigans.

“I’m always surprised by how each record brings me closer to writing simpler, heavier, catchier songs like those bands who gave me my musical epiphany: Nirvana, the Smashing Pumpkins, Hole and that first Foo Fighters record,” McClure said. “I first learned how to write by copying them and got lost for a decade in intricacy and experimentation. Now, it feels like I’m heading back.”

We asked McClure to take the Ten Questions challenge. Here’s his responses:

Gary McClure: The Red House Painters record with the rollercoaster on the cover. Mark Kozelek has written better songs than those that are present here, but the unquantifiable essences and circumstances that combined for this album still somehow manage to always break my heart.

That’s such an insanely huge question that I have no idea where to begin. I can really do without listening to 99% of popular music.

Writing, recording and playing live are the only good bits. Everything else you can think of related to being in a band is a pathetic waste of empty time.

Pretty much everything else.

Caffeine is the greatest for sure.

Chicago has always been good to me. My old band Working for a Nuclear Free City had the best show of their USA Tour there. Bridgette and I met there. I bought my favorite guitar there. It looks beautiful from afar and it’s and wonderful place to walk day or night. Good people, good food.

I’ve likely cursed it now and our next Chicago show will be some humiliating disaster. I was a Bears fan when I was a kid after watching the late night football with my dad. They really need to get that dark-ages, regressive, small handed prick’s name off that tower.

I don’t remember. It would have been with my old band The Nukes, and it was probably bad because we were high.

It’s currently half and half. I work whatever minimal mental effort jobs I can get in between tours. Tell me where to stack the boxes, give me the money and leave me the fuck alone so I can keep thinking about art and death.

I’d hate to be the guy handing out sixes and sevens in music publications. I couldn’t imagine a more useless waste of time.

Being an ignorant prick, all I know about Nebraska is from that Bruce Dern flick. Made it look more depressing than Missouri, though i find that hard to believe. Seriously though, Omaha looks like a cool city responsible for great and interesting art and music. Very much looking forward to checking it out.

American Wrestlers play with Varsity and Eric in Outerspace Thursday, Dec. 1, at The Slowdown, 729 No. 14th St.. Showtime is 8 p.m. Tickets are $8 Adv./$10 DOS. For more information, go to theslowdown.com.