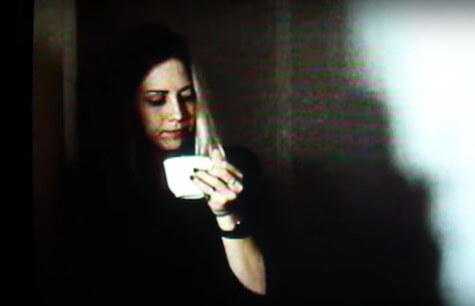 Annalibera is a project fronted by Nebraska ex-pat now Des Moines resident Anna Gebhardt. She’s been performing since 2012, but made her first indelible mark on the music world with 2015’s Nevermind I Love You, a dense, soaring 8-song collection of chiming, beautiful indie rock songs you absolutely must seek out (It’s on Spotify, btw).

In a change of direction, Gebhardt followed the album with ambient/noise/experimental cassette called Loveil (Warm Gospel Records) that included a 26-minute companion film shot at her family farm in Nebraska. Available on YouTube or at annaliberamusic.com the art film is haunting in a Warhol-ian sort of way. Gebhardt will be joined by drummer David Hurlin for the July 25 Milk Run show performing songs from Loveil, along with new material.

We caught up with Gebhardt and gave her the Ten Questions treatment:

Anna Gebhardt: To answer this question I go by what album I’ve listened to the most times so it’s between Loveless or Heaven or Las Vegas.

Kid Rock “Picture,” that song makes me want to crawl out of my skin, always has.

Juggling everyones schedules, all the marketing and emailing.

Not sure I’ve toured enough for this question. Always great shows in Nashville and Chicago. Recently been thinking about a great one in Gorzow Wielkepolski (Poland), but so far I’ve only played there once. A lot of times those smaller towns make for a magical show (if you go on a weekend).

That’s a toss up between Columbus, OH, or Paris. Long story.

With money, unfortunately. (Freelance writing and teaching piano/voice lessons. Occasionally I am employed to be a backup singer! Can’t pay the bills singing in Des Moines, IA, though).

I would like to study visual art. I would hate to be in business, law or politics – those are not me. I would feel like an actress every day in my suit.

Omaha Nebraska wasn’t good enough for me / always thought i was the roaming kind / with a pocket full of dreams and my one shirt on my back / I left there lookin for something to find/ Omaha you’ve been weighing heavy on my mind/ Guess I never really left at all/ I’m turning all those roads I walked around the other way / And coming back for you Omaha (When it’s late and people are passing the guitar around I sometimes play this song, one of my favorites!)