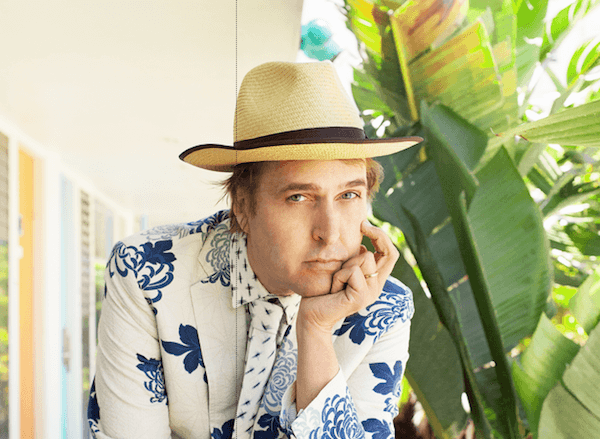 California rocker Chuck Prophet has taken a long road to stardom, starting in the ’80s with psychrock/Americana band Green on Red. Prophet went onto work with a number of music luminaries including Alejandro Escovedo, Kelly Willis and Lucinda Williams while nurturing his own solo career.

Prophet’s latest, Bobby Fuller Died for Your Sins (2017, Yep Rock), is classic barroom rock with Prophet sounding like the second coming of Ray Davies. He said the album was inspired partly by the mysterious death of rocker Bobby Fuller in LA in 1966. “California has always represented the Golden Dream, and it’s the tension between romance and reality that lurks underneath the surface in all noir films and paperbacks, and that connects these songs,” Prophet said.

We caught up with Chuck and asked him to take our Ten Questions survey:

Pavarotti once said he hated the sound of his own voice. Only one voice he liked less. Add that was Placido Domingo. I’m sure my least fave song it out there. I just haven’t heard it yet.

When it’s all clicking, it’s just a great joyride playing with a band as great as The Mission Express.

Hate is a strong word. But there are people out there don’t know that The Old Man in the Sea is not about fishing. Being in a band. It’s a shared experience. And that’s the best and worst part of it. There’s no way to share a pulled muscle with somebody else. Pain. We do that on our own.

I appreciate a good bowl of cereal. That’s hard question. But if you ask me, “Who’s your favorite drummer?” There’s no one answer to that. That’s like saying, “What do you like best for lunch. Do you like tuna fish sandwiches?”

Albany, NY. I’d have to start taking medication if I revisited that night.

Too long. I’ve been playing in bands since I was 12 years old. There have been times where I washed dishes, parked cars, or even gathered signatures. But mostly, I haven’t had a job other than playing music and writing songs. I don’t know if I’ve been making a living. But, I suppose not having a real job is a start.

I doubt it’s much fun being a corrections officer.  And I’m sure it’s pretty stressful and altogether unpleasant. Madness. Short leashes. But people who can do that? With dignity. I have to give them my respect.

Seems like a good and livable place. Been there a long time. They must be doing something right. I once drove across the country by myself. Sat in a Borders in Omaha from the time it opened until it closed. People came and went. Kids were doing homework. I got to know the staff. It was a good time. I made up my own stories about them.