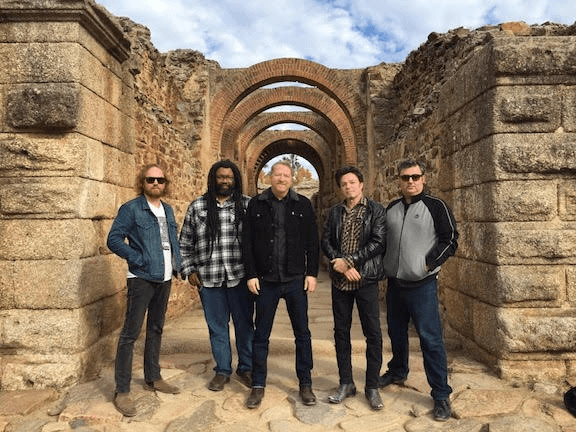 If you listened to CMJ-style indie rock in the early ’90s (or watched MTV for that matter) you’re already familiar with Cracker. Their anthem “Teen Angst (What the World Needs Now),” from their 1992 eponymously named debut on Virgin Records, was unavoidable, with the fist-shaking line: “Cause what the world needs now / Is another folk singer / Like I need a hole in the head.” Then there was their brooding rocker “Low” off the follow-up, ’93’s Kerosene Hat, where frontman David Lowery says being with his girl is like being stoned. Ah, now you remember.

Well, there was a lot more to Cracker than those two songs. Lots more. The band, who at its core is Lowery and guitarist Johnny Hickman, grew out of the ashes of seminal ’80s indie band Camper Van Beethoven. Since their debut, the West Coast act has released nine studio LPs whose sound ranged form alt rock to alt country to everything in between. No doubt Cracker fans at The Slowdown Friday night will get a smattering of favorites and deep cuts from the band’s 25-year recording history, including material from their most recent double-album, 2014’s Berkeley To Bakersfield.

We caught up with Cracker guitarist Johnny Hickman and gave him the Ten Questions treatment. Here’s what he had to say:

Johnny Hickman: After 25+ years and nine albums I can honestly say that at any given time I can go back and revisit a Cracker album that becomes a favorite again for a while. When we write and record them, they are all the best thing we ever did… at the time. I think that’s a pretty common thing with recording artists. You’re always trying to top yourself, or why do it?

The answer to the first question likely applies here, too. We don’t have any songs that I can’t stand. It doesn’t make it onto an album unless David and I are both pretty proud of it. Sometimes they wear on us and we take them out of the live show for a bit, but then we often bring them back at some point. We always play our radio hits because those songs put us on the map. Bands that think that they are too cool to play their hits are shooting themselves in the foot. The rest of the set list changes as we go. It’s more fun that way.  I think the fans like that variety, too.

It really all comes down to playing the songs live for people. That’s why we do it year after year. The rest of it, the fame, the rave reviews and attention, in time you realize are largely a lot of tedious bullshit. In the end, the music and the fans are all that count.

The travel. The jet lag and constant exhaustion of it all is more than most people could even imagine. There are days when I wish I’d followed a more normal path and could have the luxury of a decent night’s sleep in my own bed every night, more time with loved ones. But then again, I was bored senseless when I did work regular jobs as a young guy. It’s a blessing and a curse as the saying goes.

As a teenager playing in bands with older musicians I witnessed the frightening end result of overindulgence. I was in or around bands with guys that overdosed and died by the time I was in my early twenties. I like a glass of wine or bourbon or the occasional hit off a joint, but I don’t let them wreck my career or my life. It’s more just recreational to wind down after the shows.

There are hundreds of towns that I love to work in. At the top of that list are the major cities of Spain like Madrid or Valencia, the Basque region, Bilbao. In the United States I especially like the towns that got us early on with our debut album “Cracker” in 1992 and stayed with us. There are plenty, but Chicago, San Francisco, Boston and Toronto come to mind.

That’s hard to say. After 25 plus years at this we’ve had great and terrible experiences all over the place. I remember Houston being kind of awful for us in the early days, but it has since really redeemed itself and been fine the last several years. Some places take a while to get this band but once they do they tend to stay with us.

Yes, very fortunately. We’re not wealthy, but we get by. It took years of paying dues before that as the saying goes. Let’s just say that I worked a succession of awful jobs before this. With people less willing to pay for recorded music these days, a band has to stay on the road to survive, and so we do. Every member of Cracker is involved with side projects that involve music as well.

One of the things I did before music made me a decent living was work as a hair stylist. I actually worked at a mortuary styling the deceased for a while, too. It was peaceful and not a bad way to make a living. At one point I thought about going into law enforcement but I’m glad that I didn’t now. I prefer to be appreciated instead of vilified as people in that field are so often.

As a kid, my military dad was stationed at Lincoln Air Force Base and we lived there for four years so I know more about that area. Omaha was where we went to get things at the big department stores like Gold’s. The winters seemed harsh, but I have great memories of Nebraska. Corn, sledding and fishing. I look forward to being back there for the show!